BLOG Antalya in Autumn -City Guide and Things to Do

City Guide and Things to Do

Antalya in Autumn is our favourite time of year. Regardless of where we go, we love Autumn. Stunning landscape colours and cooler temperatures easily lure us, but Antalya is our favoured destination because the area promotes outdoor living longer than other places in Turkey, which are cooler. While many other coastal resorts close at the end of October, Antalya city continues, hence the status of its airport as Turkey's second busiest touristic airport.

Many feared in Spring that tourism in Antalya would suffer. For decades, the two most significant numbers of nationalities visiting Antalya were Ukrainians and Russians. However, stats released at the beginning of Autumn showed Antalya maintained its status as the king of tourism on Turkey's Mediterranean coast. Additionally, stats show that foreigners are still flocking to buy property in Antalya despite increased real estate values. With Autumn running from October to December, Antalya is also ideal for grabbing the last rays of sunshine for the year.

Welcome to Antalya in Autumn

1: Weather in Antalya during Autumn

At the beginning of Autumn in October, daytime temperatures in Antalya drop to roughly 30 degrees and, in the three Autumn months, decrease to about 10 degrees. However, October and November are still great for wearing t-shirts and swimming. On some years, the sun shines greatly in December and rain doesn't descend until February. Pack a light jacket or jumpers for the night, as these can get chilly.

2: What to Expect in Antalya - Turkey 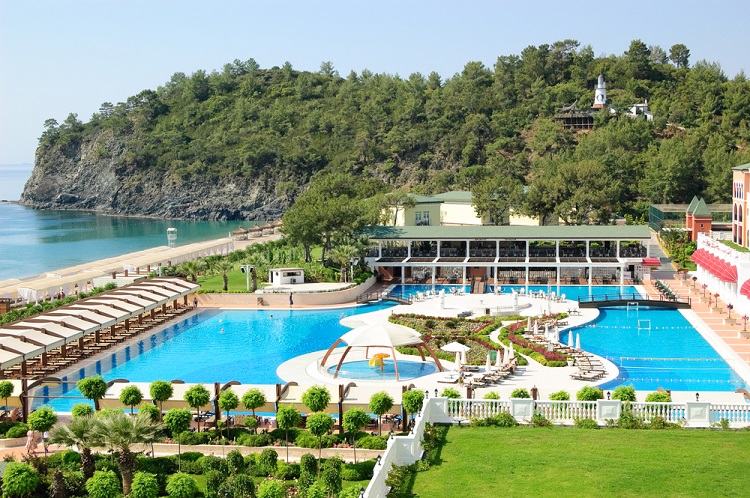 3: Best Place in the Antalya Region to Stay in Autumn

BELEK: For many years during the 20th century, Belek was a humble, simple fishing village in the Antalya region. But, when Turkey launched mainstream tourism, Belek transformed into a manmade holiday resort with a sandy beach and all-inclusive hotels. The mild Autumn weather and flat plains also made it an ideal destination for golf courses. Today, the town is Turkey's golfing capital.

ALANYA: The Alanya region is becoming a recognised tourism hub apart from Antalya city thanks to Gazipasa Airport and local council efforts. Moreover, at the coastline's eastern point, well-known historical landmarks in Alanya, like the castle and red tower, await confirmation on the UNESCO World Heritage Site list.

ANTALYA CITY: Well-known neighbourhoods include Lara beach, which travel agents nicknamed Turkey's Las Vegas, and Konyaalti beach, which Trip Advisor rates as the best in Turkey. Kaleici, the old town marked by the historical landmark of Hadrian's gate, sits in Muratpasa, while Kepez hosts the famous and stunning Duden waterfalls.

SIDE: This beautiful, historic town with modern architecture, chic boutiques and fashionable restaurants delight everyone. Golden sands and sparkling Mediterranean waters make Side popular for tourists and homebuyers looking for an idyllic sun escape in Antalya. Many ancient remains of Side are still in evidence, giving the town a unique charm. Together with mile upon mile of golden sand, Side attracts many families and retirees.

Antalya is the king of beaches in Turkey because of Konyaalti and Lara in Antalya city. Konyaalti features many cafes, walking and bicycle tracks, play areas and splash fountains, while the pebble beach and crystal water promote beautiful temperatures. Meanwhile, Lara is similar to Konyaalti but sandy. Lara also earns fame as home to large, all-inclusive hotels that stay open all year round and sell packages at Christmas and New Year. 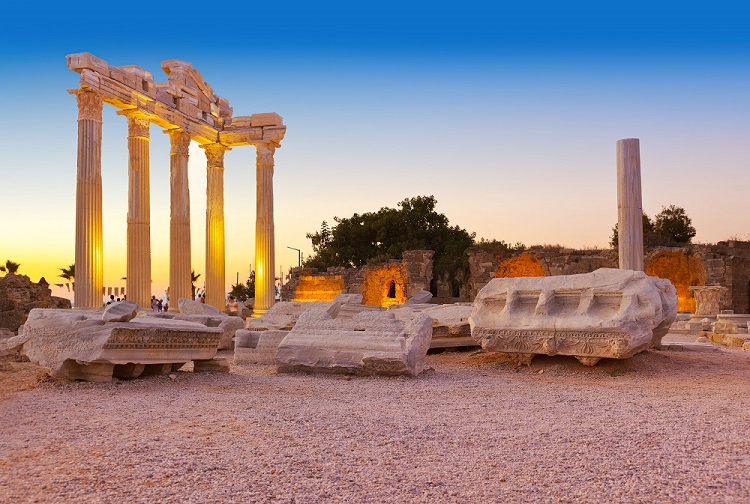 5: Places of Autumn Beauty in Antalya

Altinbesik Cave and National Park: As the world's third-largest underground water cave, Altinbesik is 40 kilometres away from Side. First discovered in 1966, the shelter has been a national park since 1994. The cave stretches 2,500 meters long, and surrounding landscapes feature various flora and fauna, including wild boar, foxes and even wolves.

Duden Waterfalls: Duden separates into lower and 15-metre-high upper falls. At the upper falls, the pathway leads behind the curtain of water. Walkways offer ideal spots from which to take photographs. The lower falls, further along, Antalya's coastline, cascade into the sea from 40 metre high cliffs, making for breath-taking sights of Autumn.

Kursunlu: Against Autumn's lush, surroundings, Kursunlu Waterfall drops 18 metres. While not one of Antalya's biggest or best-known falls, it's worth seeing – especially as the area is so beautiful. Located 20 kilometres from Antalya city, many plants and animal life exist, and visitors look for freshwater turtles, crabs and fish.

Mount Tahtali: For a unique perspective of Antalya, take a 15-minute cable car journey to the top of Mount Tahtali, also known as Lycian Olympus. The cable car is one of Europe's fastest, and panoramic views take your breath away. Enjoy spectacular Autumn scenery before descending, then stop in nearby Ulupinar to relax at riverside restaurants.

Manavgat Falls: Now, this is our favourite place to be in Antalya during Autumn. We love grabbing a cup of Turkish tea from nearby cafés and sitting and watching the falls run over the rocks while surrounded by the lovely autumn scenery. 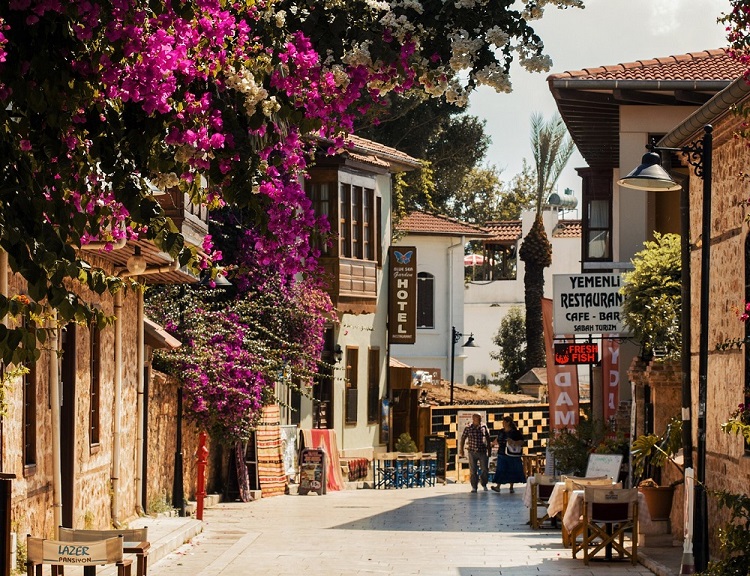 Historical Aspendos: Aspendos receives much fame for the sizeable 2nd-century theatre, said to be one of the best preserved in the world. Seating 15,000 people, the theatre annually hosts the annual Aspendos Opera and Ballet Festival. Other landmarks and buildings nearby include an aqueduct, basilica, nymphaeum, and agora.

Phaselis: During Autumn, these ruins stand out because they sit among two beaches. Explore landmarks like the agora, aqueduct, houses, and theatre. Within Antalya's Kemer district, 7th-century Phaselis was a vital sea trading port.

Olympos: Olympus settings in a dense forest lend weight to a fairy-tale Autumn atmosphere, and sitting next to a gorgeous beach, combines exploring historical ruins and sunbathing. Olympos was another member of the ancient Lycian league, a collection of influential cities that ruled the southwest coast. Buildings include houses, churches, and temple gates.

Old Side: History buffs love Side because the new part is built around the ancient part providing surreal appearances. The most famous landmark building is the old theatre, but others include the main gate, byzantine hospital, agora, and baths. End the day at the coastline Apollo temple.

Perge Ancient City: Dating from the 12th century BC, Perge was ruled by the Persians, Alexander the Great, and Romans. Saint Paul preached and started his journey to spread the word from Perge. Explore restored structures, including the city walls, gymnasium, fountains, agora, baths, necropolis, and theatre.

Myra Ancient Ruins: Sitting in Antalya's Demre area, Myra ancient ruins garner much admiration because of the hillside Lycian tombs nestled. Positioned for easier access to the afterlife, thousands travel every year to see them and the nearby Saint Nicholas church, who was Myra's bishop but is better known these days as Santa Claus. 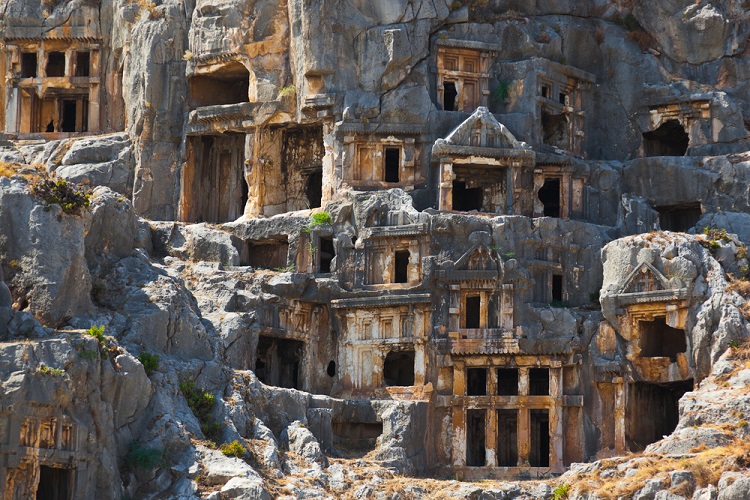 In 2003, Belek invested heavily to make itself Turkey's golfing capital. These days 15 golf courses, of which eight are championship status, make golfing in Belek big business. Cornelia Golf Club draws fame from Nick Faldo, who designed the 27-hole championship golf course. Meanwhile, Carya Golf Club employed Peter Thomson to create their 7,186 yards, 72-par course. They have also lit up nine holes of 18, allowing players to swing their clubs after dark. Also listed as one of Europe's top 100 golf courses, Lykia has the added benefit of a seaside location. Golf architect Perry O'Dye designed the 18-hole, 72-par with a challenging game because of prevailing coastal winds.

8: Visit Land of Legends in Autumn

Consisting of a hotel, water park, and shopping avenue, Land of Legends mini city offers many things to do for the day or all holiday. This theme park promotes family-friendly experiences like the shark, tiger, and Humboldt penguin exhibits. At the same time, adventurous visitors can join professional divers to feed tropical fish and take photos. The water park section also includes rides like the Wave Pool, Voyager, and Rafting Rapids, while adults typically head to the shopping avenue. Consider this theme park in Antalya as Turkey's version of Disney World.

Districts of Antalya:  Communities of Antalya form a large area on Turkey's Mediterranean coast. Claims to fame include being Turkey's citrus capital and a respected film and cinema hub. The restaurant, hotel, nightlife and shopping scenes are top-class and professional. Indeed, the region is an all-rounder attracting 14 million tourists every year from around the world, but to get to know Antalya, you must go local.

So, we hope we have convinced you that Antalya in Autumn is a beautiful time of year. If you plan to visit or are looking at places in Antalya to buy a property and live, then our blog about Turkey will be of use. Talking about Turkish culture, history, traditions and places, the blog highlights Antalya as an ideal destination for Turkey.