Street food is a ready to eat food sold by a vendor in a public place, mostly with a portable kitchen of some kind. Sometimes classified as finger food or fast food, they are some of the most popular snacks in the world. Every region of every country has its own versions of street food and some have become infamous worldwide. In New York City you can enjoy a warm salted pretzel, in Germany a bratwurst, thousands every day eat waffles in Belgium and crepes in France, while churros has become an incredibly popular snack in Spain and Latin America. You can even find the weird and wonderful in some parts of Asia, particularly in China where they enjoy delicacies such as scorpion on a stick, fried tarantula and ‘balut', the fertilised duck egg. Wherever you are in the world, a huge variety of street food is on offer and deliciously cheap prices. 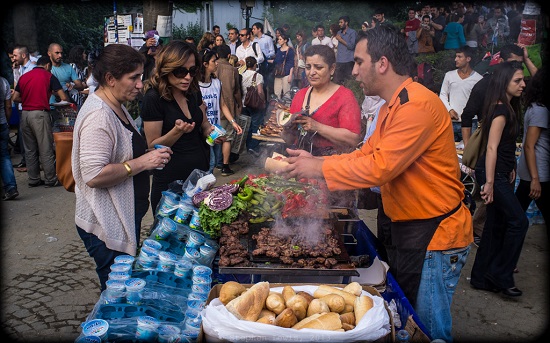 Istanbul is no different and has a multitude of delicious street snacks to keep you going throughout the day and the roots of street food don’t stray too far from this fabulous city. It is believed that the concept of a street snack began in ancient Greece where small fried fish would be served from a street side counter. However, in Renaissance Turkey, many crossroads across the country would be surrounded by vendors selling hot meats of spit-roasted chicken and lamb served with bread, what we now know as kebabs, which would be bought by travelling salesmen and marketeers as they caravanned their wares from city to city. As a result, in 1502 Ottoman Turkey became the first country in the world to legislate and standardise street food. Soon all cities in Turkey were creating eateries formed around the great Ottoman bazaars which would serve meats and soups alongside quick vegetable dishes, rice dishes and sweets. Street food quickly became a staple Turkish tradition which still survives and thrives today, particularly in Istanbul.

There isn’t a single neighbourhood in Istanbul that you can pound the pavements of without at least smelling the wonderful aromas of rich street foods. The fragrances are enough to make your mouth water and leave you wanting a taste even if you aren’t hungry. Around every corner in Istanbul you will find something different to attack your senses and the variety is huge, with every food type available in a small snack sized package. If you are spending a few days in Istanbul, make sure you try our top ten Turkish street foods of this great city. 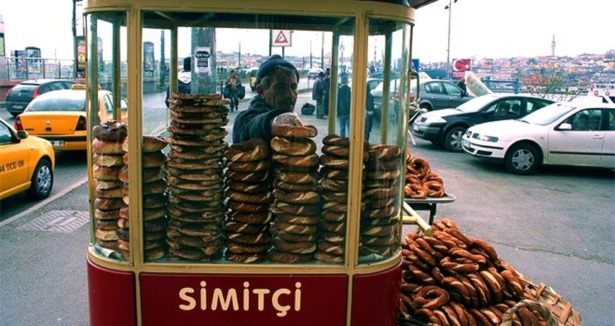 If there is one street food that could be crowned the national street food of Turkey, it would be ‘simit’. A soft, melt in the mouth bread, sprinkled with sesame seeds with a buttery glaze, ‘simit’ is the perfect mid afternoon snack in Istanbul. The chewy dough of ‘simit’ is shaped into thin rings, dipped in a grape molasses and water mix before being coated in sesame seeds and baked to perfection. The best kind of simit will be crips on the outside and warm and chewy on the inside. Some of the best can be served with Turkish ‘kaşar’ cheese or a garlic butter, but many have been known to be eaten with a lashing of Nutella too! 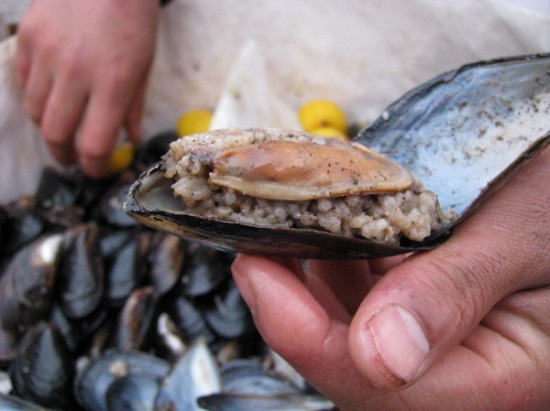 At a first glance, Istanbul’s street mussels may appear to be quite plain. However, take a closer look and discover a world of mouth-watering goodness between those shells. Most traditionally, mussels will be stuffed with a flavoursome rice, but some of the best become much more interesting, packed full of orange mussel, herbed rice, pine nuts and currants. Crack them open and cover with a squeeze of juicy lemon and you are good to go.

This particular one is a favourite all over Turkey, particularly in the coastal regions and certainly in the city of Istanbul. It is a simple one but delicious and satisfying all the same. Istanbul is of course a city with a good maritime history and its close location to the sea means that some of the best fresh food in the world makes its way to Istanbul. In fact, it was the fishermen themselves who began the tradition of the fish sandwich in Istanbul, deciding to cook and sell their catches directly rather than to sell the fish to vendors. It is a simple affair, grilled fish stuffed into delicious freshly baked bread, sometimes smattered with a a few seasonal vegetables and salad. The best of the best can be found around the shores of the Golden Horn and should cost you no more than 10 Turkish Lira. ‘Balık ekmek’ found at the ‘Kumkapı’ fish market on the shore of the Sea of Marmara will be some of the freshest in town. 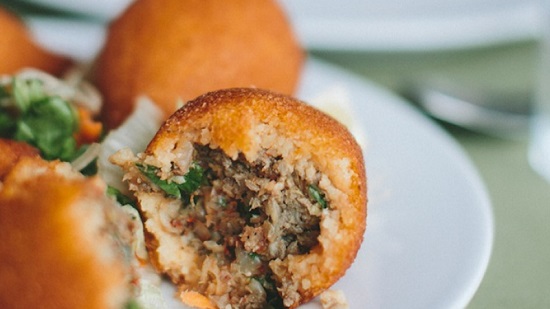 Known as a torpedo of taste, ‘içli köfte' is an incredibly popular choice of street food in Istanbul. These oval shaped croquettes are made of bulgur, minced onions and ground beef or lamb, mixed with spices such as nutmeg and cinnamon, fried with sautéed pine nuts. As they cook, the juices of the spiced meats seep through to the crunchy exterior creating a taste explosion as they are eaten.  A portion of ‘içli köfte' is best served with a side of mint yoghurt or a spicy sauce to bring out the flavours. 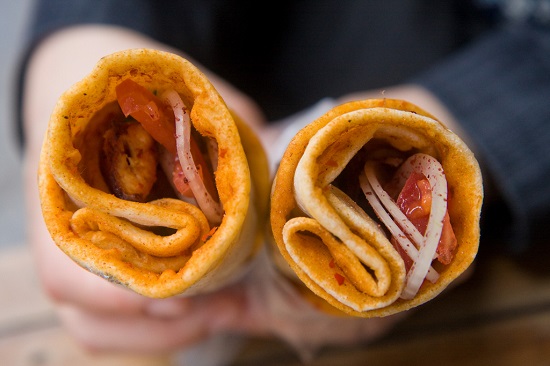 Traditionally a street food but also widely found in restaurants across the city, ‘dürüm’ is one of the most popular street foods in Istanbul. Arguably a type of kebab, the main component of a ‘dürüm’, after the meat filling, is the flat bread made to contain it. The bread is called ‘lavaş’, made of flour, water and salt, rolled out as thin as possible to create a crisp layer of bread, just thick enough to prevent the filling from dripping out. The ‘lavaş’ bread will be filled with delicious spiced meat and salad mostly, but vegetarian options can also be had with fillings of vegetables or cheese. Some of the best can be found around Taksim Square.

A close second to the ‘dürüm’ is the traditionally spicy ‘tantuni’, which features spicy beef with tomatoes and peppers with a generous addition of spices wrapped in a thin tortilla. Hailing from Mersin on the Mediterranean coast, locals believe you haven’t had a real ‘tantuni’ if your lips aren’t burning afterwards! 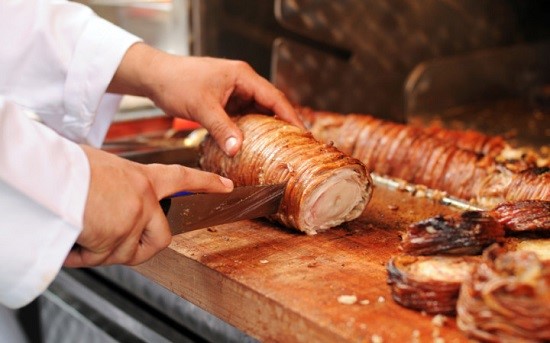 Sounds  awful doesn’t it? But you might be surprised to learn that ‘kokoreç’ is one of the most delicious street foods to be found in Istanbul. It is the food that Istanbulites turn to after a night of rakı drinking as the intestines have a lot of grease and salt that comes with it. Really, this dish is a delicacy but is hugely popular in Turkey. The offal meat is wrapped around innards such as sweetbreads, resulting in a loaf-like product which is then roasted before being sliced and chopped with tomatoes, spices and herbs and cooked on a grill. 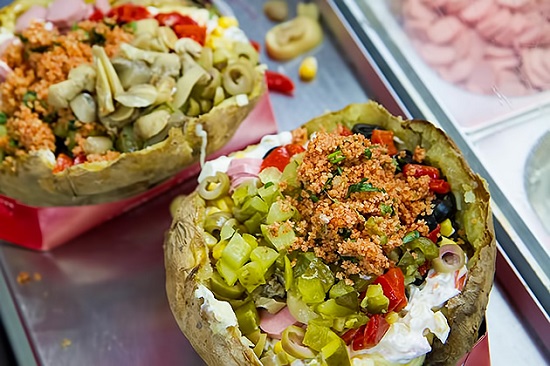 Head to the Ortaköy neighbourhood of Istanbul for the best baked potato of your life. It may sound simple, after all it is just a baked potato, but the possibilities are endless when you attempt to decorate your potato and create a tantalising dish all of your own. Add Turkish cheeses, corn, salad, vegetables, meat, anything you can get your hands on and then take your baked potato and find a bench somewhere to eat your creation with a plastic fork as you watch the world and its people go by. 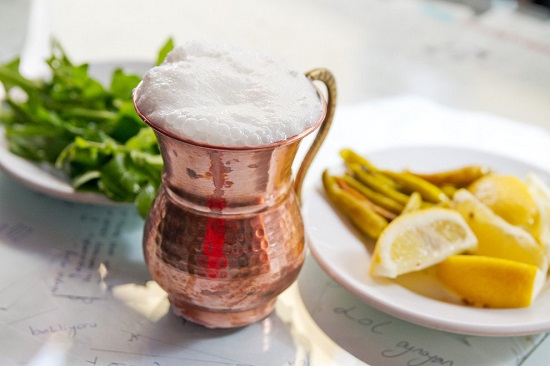 If you have had enough to eat and want to try a traditional Turkish drink other than rakı then the streets are the place to go. Aside from the delicious fresh fruit juices, squeezed from locally grown Turkish oranges and pomegranates, you have to try ‘sahlep’, ‘boza’ and of course ‘ayran’. ‘Sahlep’ is traditionally a winter drink, a powder mixed with water or milk before being boiled until it is thick, topped with a dusting of cinnamon. The main ingredient of the ‘sahlep’ powder is taken from the root of a rare orchid only found in Turkey. Thick, sweet and grainy, you are most likely to find an artificial version of this drink on the streets as the orchid that is used to make the traditional version is sadly becoming extinct.

Also a warm winter drink, ’Boza’ is made from millet that has been boiled, crushed and strained, resulting in a thick liquid that is fermented and ultimately garnished with cinnamon and roasted chickpeas. It is one of the oldest drinks in Turkey, dating back to the 4th century when it was fed to the Ottoman armies as a nutritious drink. The oldest Boza shop in Turkey was founded in 1876 by brothers Haci Ibrahim and Haci Sadik. Their shop, ‘Vefa Boza’ can still be found in the Vefa neighbourhood of Istanbul.

Lastly we come to ‘ayran’, a cold yogurt based beverage mixed with salt. You can find this creamy drink all over the city, even in fast food chains McDonalds and Burger King, but the best stuff will be found on the streets. If you’re feeling adventurous, you’ll need to head out of the city for the best ‘ayran'. Take the Istanbul to Izmir highway and stop at the town of Susurluk, famous for its toasted cheese sandwich with tomato paste and its foamy ‘ayran'. 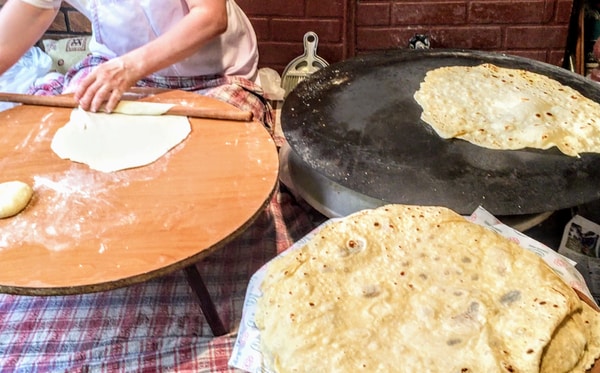 Savoury or sweet, they come in every form with a variety of fillings to choose from! ‘Gözleme’ is more doughy and less spongy than the pancakes that we have come to know and love in Europe and are more likened to the crepes of the French, though slightly more plain; until they are filled of course! The dough is thinly rolled before you choose your filling. Like the Turkish baked potato, you can pretty much fill your pancake with whatever they have on offer, from cheese and onions, to meat or fish, vegetables, sauces, potatoes and of course the sweeter choices such as fruit and Nutella, sugar and lemon or nuts and syrup.

As you walk through the streets of Istanbul you are sure to come across several restaurants and cafés which brazenly display a live ‘gözleme’ production, featuring women in traditional dress rolling dough in the shop window. You are more likely to see this in Sultanahmet and it is purely directed at tourists. Get off the beaten track for the best ‘gözleme’ in the city and find a small market such as the Monday Bazaar which sits between Selamiçeşme Parkı and the railroad in Götzepe neighbourhood of Kadiköy for the best pancakes in Istanbul. 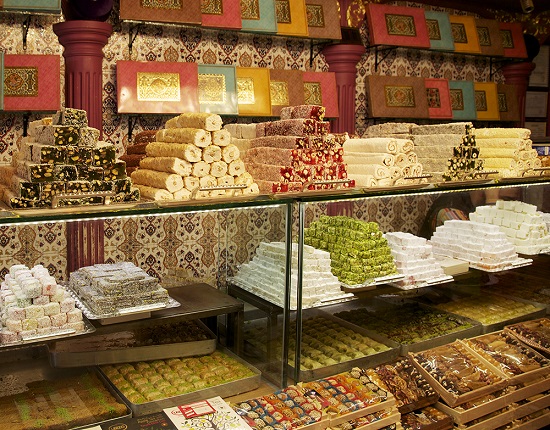 Visit any bazaar or street market in Istanbul and you are bound to find an incredible array of sweets. Counters filled with Turkish delight, baklava and other treats are about as popular as the spice markets that you’ll also find intertwined with every market stall in the city. Just a few to make your mouth water other than the obvious include ‘tel kadayıf’, pastry threads stuffed with nuts, ‘ekmek kadayıf’, bread like rusks topped with clotted cream, ‘künefe’, a delicious concoction of pastry threads stuffed with cheese and syrup, served hot, ‘lokma’, ball shaped fritters smothered in syrup, and ‘revani’, a very sweet cake made with semolina.

Of course you can’t discount the delectable, soft and flavour bursting squares of Turkish delight, or the sweet, nutty, pastry goodness of baklava either, but if you come across the colourful steel trays of an ‘osmanlı macunu’ vendor, give it a try! Much like the displays of ‘salep dondurma’ or Turkish ice cream, buying a stick of flavoured sweets is a real performance! Melted coloured sugar is twirled and spun from a large tin onto a stick to create this treat, with flavours like kiwi, strawberry and orange to enjoy. Dating back to the Ottoman Empire, when the mother of Süleyman the Magnificent enjoyed a grape molasses version of the sweet, you’ll be enjoying a piece of history too!