The Beautiful city of Tekirdag gained its name from the huge mountain that overshadows the city,  and like much of Turkey it has its own share of wonderful history dating back to around 4000BC, being ruled by the Greeks, Venetians, Romans and more.

The Namık Kemal House Museum is well worth a visit, devoted to the life and works of theTurkish nationalist poet Namık Kemal (1840–1888).

The Tekirdağ Museum of Archaeology and Ethnography is anther must see for historians, containing archaeological artifacts found in and around the province, some believed to date back to the early Bronze age.

The Mustafa Kemal Ataturk Statue, the founder of the modern day Turkey, located in the centre of the city is the only one in Turkey that has ever been made true life size.

There area many beaches located around the Tekirdag bay, all quite popular with wind surfers as the waves are prefect for professional surfers , especially during the months of June, August and September, though July seems to be calmer and more ideally suited for beginners.

Many of the beaches can become quite crowded at the weekend as hourds of Istanbul dwellers travel the short distance to escape the big city. 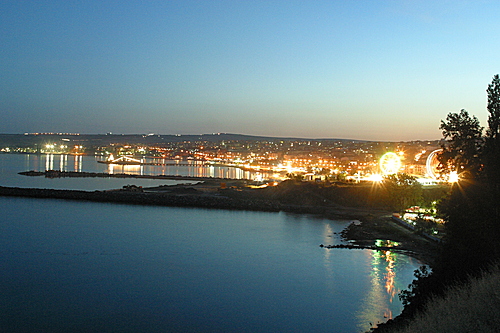 Most people recognize Oludeniz in the south west of Turkey for its tandem paragliding, however just 25km south-west of Tekirdag you can paraglide from Yanikoy village in the foothills of Mount Ganus landing on a landing strip at Ayvasil beach. There are lessons available for the brave who would love to fly solo.

Mount Ganus also offers some wonderful walking trails through its pine and oak forestlands with the occasional vineyard and some stunning views over the Marmara Sea and the local Marmara Islands.

Tekirdag is famous for its ‘Kofte’ Turkish meatballs, not as spicy as some areas of Turkey and many people travel far and wide for the delicious dish. Being a coastal city, Fish also a favourite with some lovely fish and seafood restaurants scattered along the shores.  Though you can find a few burger and pizza joints most foods available are traditional Turkish dishes.

Most of Tekirdags sights are downtown and easily accessible by foot, though there is a public transport system, based in local minibuses, some privately owned and some run by the local council, all having fixed routes and prices are very little, costing on average 1,5TL for routes within the city limits and run every ten minutes throughout the day and every 30 minutes in the evening. There are also many local taxis available from the taxi ranks but it’s is wise to be aware that fares are approximately twice that of Istanbul taxis.

The local airport is Corlu, though it does receive very little in international flights, with most visitors using Istanbul’s Ataturk Airport and then transfer either by bus train or boat.