The citizens of Turkey are delighted that the Turkish football team made it through the qualifying rounds of Euro 2016 and will be playing in France this week to fight for the title. While many people may not think of Turkey as being a threat in the competition, past victories prove that the Turkish team could be the one to watch in Euro 2016. The Turkish football team have a huge amount of support at home and this has been solidified by the recent partnership between UEFA Euro 2016 and Turkish Airlines. Europe’s leading airline believes in the team as do we at Turkey Homes and we are all looking forward to an exciting challenge in France over the next few weeks. 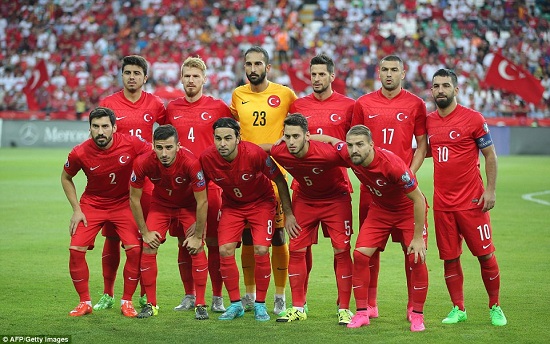 The Turkey national football team is controlled by the Turkish Football Federation, the governing body for football in Turkey and are affiliated with UEFA, the administrative body for association football in Europe. Turkey has been affiliated with FIFA since its founding in 1923 and joined UEFA in 1962. Turkey has qualified three times for the World Cup finals, in 1950, 1954 and 2002 and four times for the UEFA European Championship, in 1996, 2000, 2008 and now 2016. The team’s small number of qualifications may lead one to believe that Turkey is not a serious contender for the title, however since the turn of the century, when Turkey has qualified for a competition, they have done incredibly well. Turkey has reached the semi-finals of three major tournaments; the 2002 World Cup, the 2003 Confederations Cup and Euro 2008. 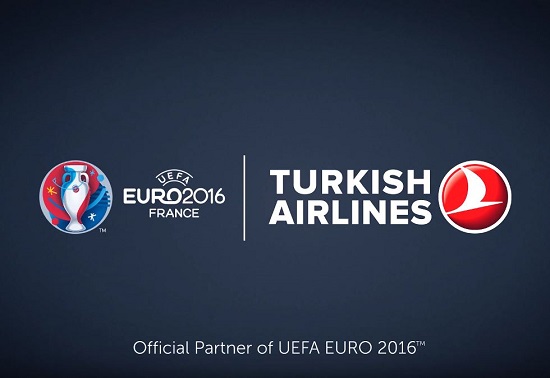 In December 2015, following Turkey’s qualification for Euro 2016, Turkish Airlines signed a global sponsorship deal with UEFA to become the organisation’s first airline partner since the European Championship began in 1960. Turkish Airlines has always been a great supporter of national football and for the sport worldwide. The airline has been chosen as the official carrier by several European football clubs in the past, such as FC Barcelona, Galatasaray, Aston Villa and A.S Roma and has been the primary sponsor of the Turkish Airlines Euroleague since 2010, to be continued until 2020. In Turkey, the airline became the kit sponsor of Galatasaray for the 2014-15 UEFA Champions League. The airline also held a sponsorship deal with British footballer Wayne Rooney and sponsored Manchester United for 3 years from 2010 which included the team being used in one of their airline commercials. 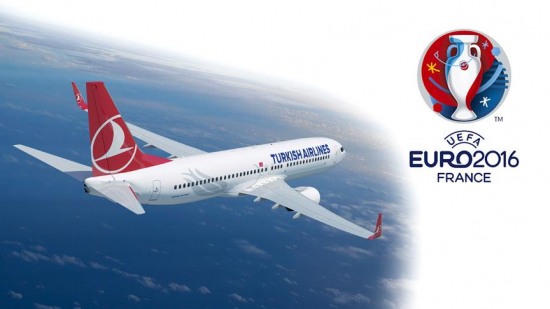 For 2016, the sporting spotlight of Turkish Airlines is on UEFA’s Euro 2016 championship and the Turkish national team. The airline is proud to be able to fly fans around the world to support their favourite teams and players as they believe that football has the power to unite people from different nationalities and cultures. Flying to more countries than any other airline, including 107 destinations in 42 European countries and six destinations in France alone, this arrangement could not be more appropriate. The partnership of Turkish Airlines with UEFA is a huge coup for the leading airline but also for Turkey as a country. The airline’s name will be plastered all over television sets across Europe for an entire month and with Istanbul Atatürk Airport being the airline’s hub to hundreds of destinations across the world, the campaign could bring tens of thousands of additional tourists through the gateway city and into Turkey in the coming months.

To celebrate Euro 2016 and their new partnership with UEFA, the Turkish Airlines campaign will be producing exclusive offers and promotions as well as some surprise events. Already the airline has developed special charter rates for competing teams to travel to and from the tournament and social media campaigns for the fans, including free tickets to matches and free flights. Passengers will also be able to watch Euro 2016 games on board their flights with live streams from France and those enjoying the perks of their award-winning business class lounge in Istanbul will have the opportunity to play the official Euro 2016 console game, which will be synchronised to reflect the tournament’s results. Their livery planes have also been decorated with the Euro 2016 visuals with their new branding on show for all to see, including the faces of the Turkish football team and their manager, Fatih Terim. Of course, there will also be a specially designed menu card for passengers on board flights departing Istanbul’s Atatürk Airport too. 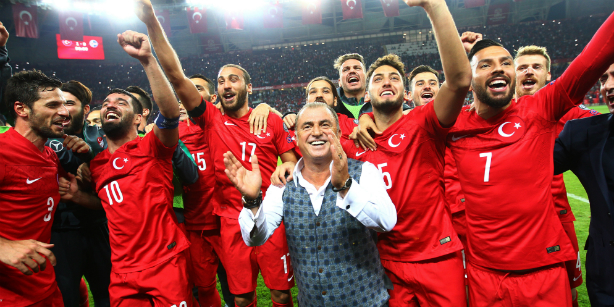 The players of the Turkish national football team recently became emotional on board a Turkish Airlines flight to Vienna ahead of a friendly match against Austria. In Turkey, mother’s day fell on the 27th of March and the airline arranged for each player to be served with a meal cooked at home by their mothers, along with their videos wishing the footballers success. If this is what the team can expect for a friendly match, imagine the support they will get from the airline as they begin to win matches in competition!

The country has always displayed an exciting atmosphere in towns and cities everywhere when important footballing events have occurred and Euro 2016 will be no different. Being such a patriotic country, if you can’t be in France for the matches, you will find just as enthralling a time in Turkey. Every bar and restaurant in Turkey will be playing the matches if they can and the feeling in the air will be electric, especially when their home team plays. There will be a party atmosphere all over the Turkey, should the Turkish start to win matches. Cars will parade through the streets honking their horns and fireworks will be lit. The celebrations are always in good humour and are incredibly exciting, sometimes lasting all night. 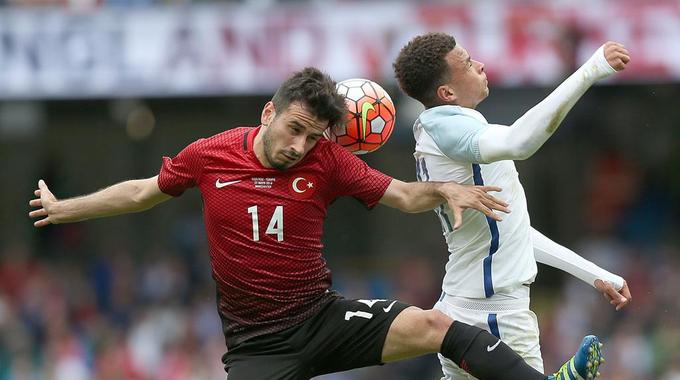 This year, Turkey has been drawn in group D alongside Spain, Croatia and the Czech Republic. Under the management of Fatih Terim, the very same manager who took them to the semi-finals Euro 2008, Turkey qualified as the best third placed team, not needing a playoff to book their place in France. Recently, they were undefeated in 13 games until they were beaten by England in Manchester last month. Currently the bookies are predicting that they will finish third in the group behind Spain and Croatia, but when they have the fans and the crowd on their side, there is no telling what the Turks could achieve. Having not been in the finals of an international competition for eight years, the team really has nothing to lose and third place could be enough to get them through to the knockout stages. They are the underdogs of the competition and with the talent on their team to get past the group stages and the excitement of just being a part of the event, Turkey really is the team to watch out for.

The team’s midfield players make for an exciting line up, sporting Hakan Çalhanoğlu, one of the world’s best free kick takers, Barcelona winger and star player Arda Turan and deep lying playmaker Selçuk İnan. 18 year old exciting youngster Emre Mor recently signed by Borussia Dortmund due to make his debut will also be part of the squad for the game against the Czech Republic. Cult hero Mehmet Topal will also be on the team. Player Ozan Tufan was at the very core of Turkey’s qualification success and while he is unlikely to be placed in the starting line up, his talent deep in midfield dictates play and can spark attacks that the likes of Arda Turan and Burak Yılmaz can finish off up front. Oğuzhan Özyakup, formally of the Arsenal youth football team and Holland under-21 captain is the player expected to take everyone by surprise in the coming weeks. The 23 year old has established himself as one of the brightest talents in Turkish football and played a key role in Beşiktaş winning the league title this season, capable of playing centrally and in an attacking role. 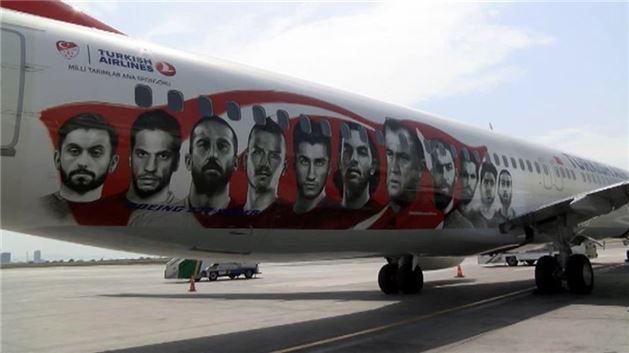 Turkey begin their Euro 2016 campaign on Sunday the 12th of June, playing against Croatia. This will be followed by matches against Spain on Friday the 17th of June and against the Czech Republic on the 21st of June. If Turkey finish third in their group and England finish first in theirs, it is conceivable that the two teams could meet again in a less friendly way in the final sixteen! After Turkey’s loss in the friendly last month, it could be time for payback if the moment arises. It was a close match in May, it could be even closer if it comes to it with both teams desperate to win out. The England team has a reputation for losing bottle and making silly mistakes when the pressure is on and could possibly give Turkey the ticket they need to make it through to the quarterfinals.

Turkey are certainly the dark horses of the competition and Terim has instilled a ‘never say die’ attitude among his players. It has been suggested that this year’s team has more quality than the squad he took to the championship in 2008 when they reached the semi-finals, so it will be interesting and incredibly exciting to see where the team can go from here. Turkey Homes are looking forward to seeing what happens in the coming weeks and will be cheering the team on from their offices in London and Istanbul. With no pressure and qualifying for the tournament itself a huge achievement, the Turks really have nothing to lose and the status of national heroes to gain, so watch this crescent star shaped space! Best of luck to the boys from everyone here at Turkey Homes!