BLOG 9 Historical Places in Antalya That History Lovers Will Adore

Historical Places in Antalya to Enjoy

Anyone looking to explore historical places in Antalya will be surprised with its vast range of ancient ruins and old landmarks. Sitting on Turkey’s Mediterranean coast, the region covers a large area from Gazipasa in the east to Kas and Kalkan in the west. All these areas boast of places that attract curious holidaymakers from near and far.

We always say quality, not quantity though, and with Antalya, the diversity of ancient buildings and cities portray prominent moments of its history throughout time. From first settlement by the Attalia dynasty, followed by the Romans, Seljuk Empire, and the Ottomans, anyone visiting is embarking on a time travel expedition by exploring various ruined cities and buildings.

Since most spread out in open areas, the best time to visit is during cooler months like April, May, June, October, and November. You can sign up for a daytime tour with a local travel agency, or get there using public transport but we often make a road trip of four or five days to tour them all at our leisure.

People are also into trekking would fare well to look at the ancient Lycian way as an alternative option to seeing the best. This route covering Antalya’s coastline right down to Fethiye, encompasses many ruined cities while also offering the best of scenic landscape views.

Historical Places in Antalya to Enjoy 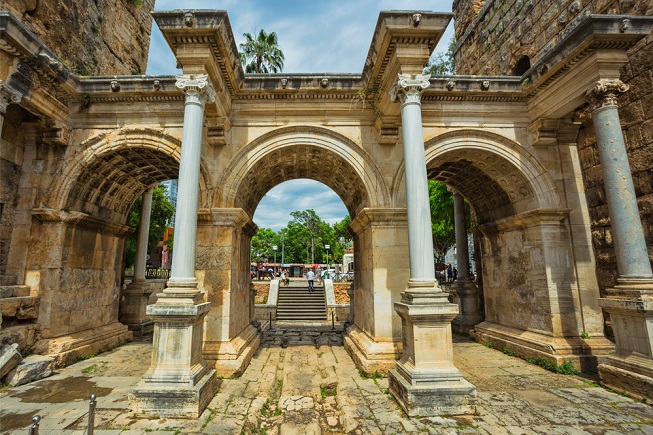 At the centre of them all, Kaleici and the famous Hadrian’s Gate is a diverse collection of buildings and landmarks left behind by various empires. Hadrian’s gate dating from 130 AD and built to celebrate a visit by the Roman emperor with the same name is the landmark entrance to the old city centre called Kaleici in Turkish.

Narrow, cobbled streets throw up more interesting buildings like the 18th-century Tekeli Mehmet Pasa Mosque and the broken minaret mosque that was a Roman temple, and Byzantine church before being converted in the 13th century. Our favourite buildings though are the old Ottoman houses some of which are now boutique hotels and fine dining restaurants.

As another famous ruined city of Antalya, Aspendos receives much admiration and fame for its ancient, 2nd-century theatre. With a capacity to seat 15,000 people, these days, it hosts the annual Aspendos Opera and Ballet Festival. Other landmarks buildings nearby include an aqueduct, basilica, nymphaeum, agora and bouleuterion from which the local council used to hold meetings. 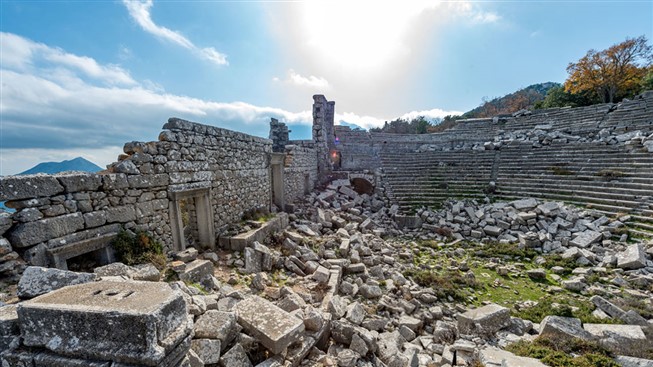 3: Termessos: A Place of Intrigue

Built on a steep hillside, this historical city isn’t for people with walking difficulties but otherwise it is worth visiting. Often called one of Turkey’s best-preserved cities, its nickname of the eagle's nest refers to its off the beaten track location, at 1000 metres above sea level. Scattered in among a pine tree forest, landmark buildings to seek out include an agora, gymnasium, theatre, city walls, necropolis, and water cisterns. Such is Termessos’s importance, it has been sitting on the UNESCO tentative list since 2000. 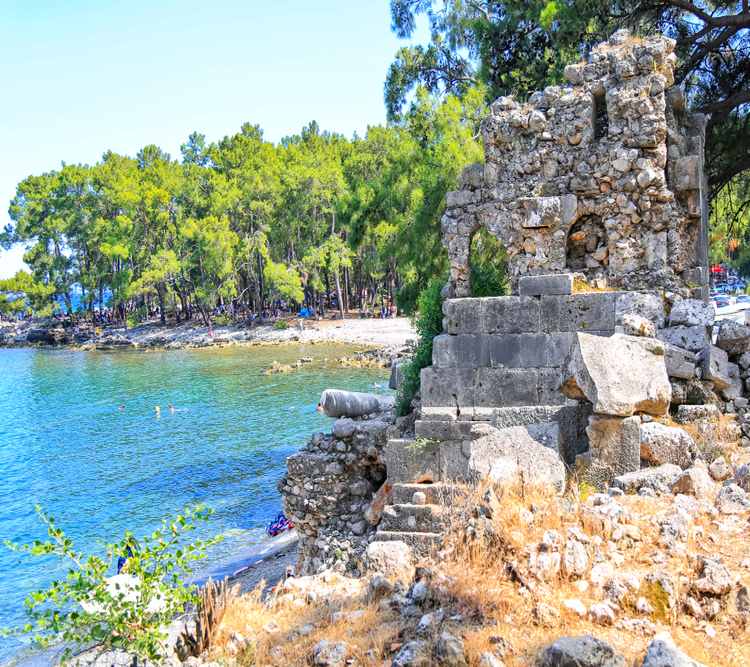 What makes these ruins stand out is a gorgeous setting  among two beaches. It is a perfect day out to explore landmark buildings like the agora, aqueduct, houses, and theatre before heading to the beach for a delightful trio of sun, sea, and sand. Sitting within Antalya’s Kemer district, Phaselis dates from the 7th century BC, and in its heyday was a major sea trading port, although this attracted pirates. Abandoned in the 3rd century AD, Phaselis is a delight to explore during summer because of its location within a dense forest.

Likewise, Olympus settings in a dense forest lends weight to a fairy-tale atmosphere, and this is another city sitting next to a gorgeous beach, hence you can combine exploring historical ruins and sunbathing in one day. Olympos was another member of the ancient Lycian league, a collection of powerful cities that ruled the southwest coast. Like Phaselis, the seaport trading status also attracted pirates, but it achieved success in later years, hence the Roman and Byzantine structures still standing. Buildings to seek include the houses, churches, and temple gate. 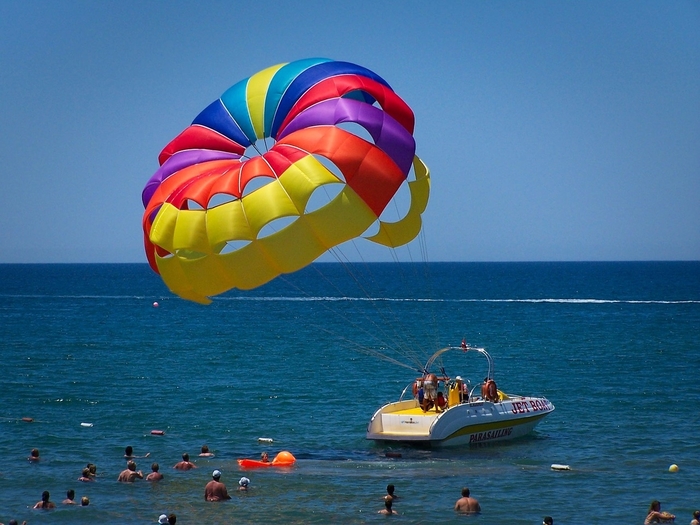 6: Old Side and the Apollo Temple

History buffs should book two nights in Side that stands out because of the new town built around the old ruins hence providing a surreal setting. The most famous and much-admired landmark building is the old theatre but others to seek include the main gate, byzantine hospital, agora, and baths. A good place to end the day is on the coastline that holds the Apollo temple. When the sun sets on the horizon, get your cameras ready for the perfect picture postcard scene. 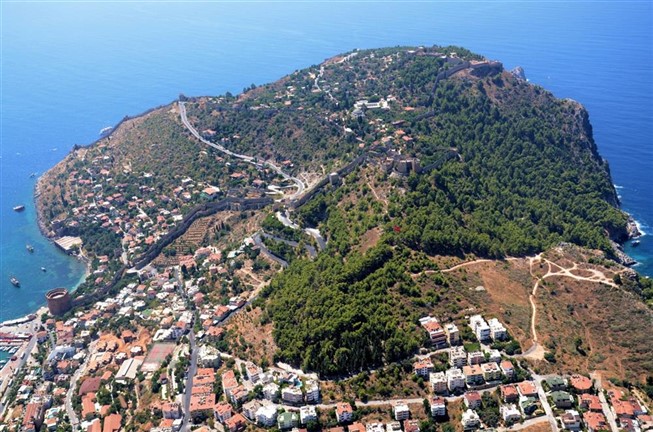 Throughout history, Alanya Castle, boasting of 6-kilometre city walls hosted Hellenistic, Roman, Byzantine, Seljuk and Ottoman communities. Dominating the skyline and overlooking the Mediterranean Sea from a hilltop position, we recommend taking a day to explore at your leisure. Buses drop you off at the main gate from which you can start your exploration of the inner fortress section, holding such delights like the 12th century Saint George’s church. End your day by walking down the hill to the harbour section and Red Tower, one of Alanya’s famous landmark buildings. 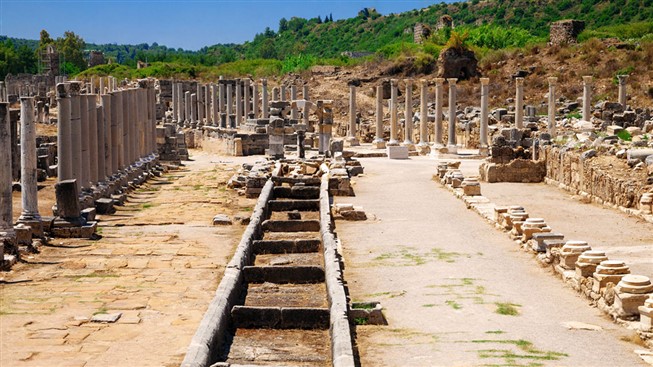 Dating from the 12th century BC, Perge is Antalya’s other prize gem. Ruled by the Persians and surrendering to Alexander the Great, it too thrived under Roman rule. Christian history is never more so relevant than here because Saint Paul preached and started his journey to spread the word from Perge. Explore restored structures including the city walls, gymnasium, fountains, agora, baths, necropolis, and theatre. Perge is another one of Antalya’s historic cities on the UNESCO tentative list. 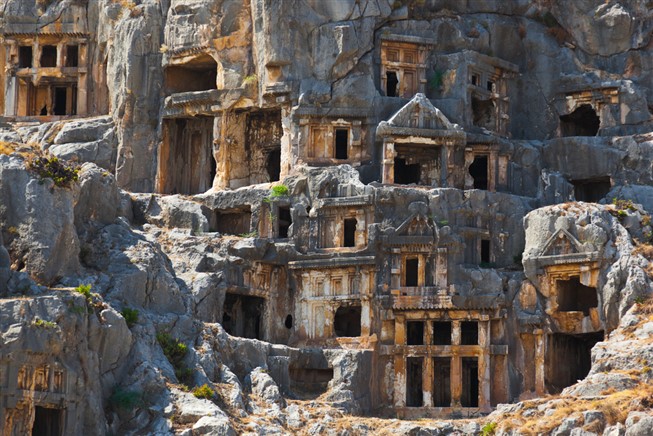 Sitting in Antalya’s Demre area, Myra ancient ruins differ from others. While the ancient theatre garners much admiration, the Lycian tombs nestled into the hillside are a focal point. Positioned at that angle for easier access to the afterlife, they are the main travel photo to promote the ruins. While there, also visit Saint Nicholas church. As Myra’s most prominent bishop and renowned for his kindness, he is more known these days as Santa Claus.

If you have extended time in Antalya centre, we also recommend you drop into the museum. Detailing the story and displaying artefacts from many historical places in Antalya, it is one of Turkey’s best museums. If it is your first time visiting the region, our Antalya travel guide will also get you off to a great start. Talking about reasons to visit, where to stay, the best time to go, it also breaks down districts and their reasons for fame.