BLOG About Turkish Tea and its Cultural Significance

Never underestimate the cultural significance of Turkish tea. To Turks, it is a shared gift between friends, a welcoming invite to strangers, fuel for the workplace, a handshake between business partners and the perfect start and end to a blessed day.

Every day, across the country, Turks drink thousands of glasses. Starting with at least two cups, alongside a traditional Turkish breakfast, in business and offices, a brew is on the boil for most of the day. For the stay at home mums, afternoons are their time to get together and chat over tea, while men gather in the male dominated tea houses as seen in most villages, towns and cities.

Many people, who are unfamiliar with Turkey assume coffee is the national drink, but it is sweet, black tea served in tulip-shaped glasses. One could almost accuse Turks of being addicts because if for any reason, they stopped selling tea, the country would indeed grind to a halt. 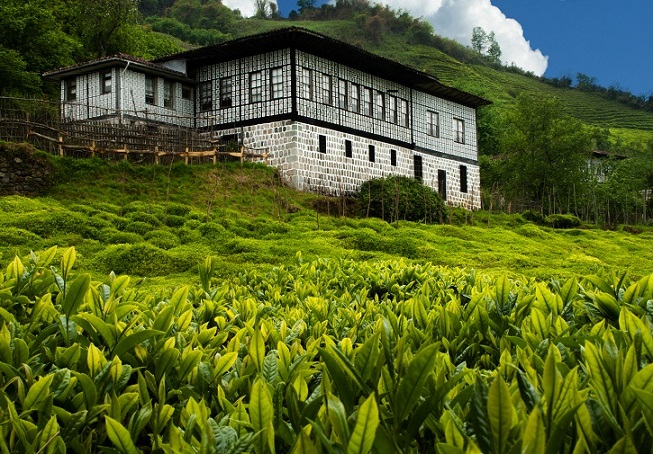 An Immense Range of Flavours and Brands

A taste exploration of Turkish tea reveals many different flavours and brands. Shop vendors usually offer tourists apple tea while they do their souvenir shopping, but this really is a gimmick since you will rarely come across a Turk that drinks it. Another rarely consumed brand but widely sold in markets is oralet that is fruity shaped granules.

Indeed, to drink tea like a Turk, the best flavour is merely black, and culturally, the Caykur brand from Rize, the tea making capital of Turkey is considered the best with an almost iconic like social status.

Rize, in north east Turkey has a hilly landscape. Perfect soil conditions and a humid climate provide the perfect environment for growing tea. Hence the popularity of tea, Caykur that is a state-owned company has 45 processing factories across the country and employ more than 26,000 people.

How to Make Turkish Tea

Brits just dunk a teabag in boiling water, but Turks have a specific way of making Turkish tea, and although it involves more time, the end results and flavour are worth it. The most important item, as well as tea leaves, is a two tire, steel Caydanlik pot of which the bottom half is larger than the top.

Measurements between tea leaves and water are not exact, and over time, you’ll learn your preference as to whether you like your Turkish tea firm with a robust flavour (demli) or weak in that it settles gently on the taste buds (acik.)

Boil water in the bottom half of the caydanlik, add some of it to the top half along with two tablespoons of leaves. Place it back on the boil but lower the heat and let steam from the bottom, brew the leaves in the top. After 15 minutes, your Turkish tea is ready to be served.

Add a small amount of brewed tea from the top caydanlik pot to a tulip shaped glass. Top up with water from the bottom and add sugar if desired. Keep the caydanlik on a low heat if you want more tea and just top up with water when necessary.

Anyone who chooses to make Turkish tea their favourite beverage can delight in the fact that experts strongly endorse for its health benefits and nutrition. Should you feel ill, drinking two cups a day will recharge your batteries in a way that no modern medicine can compete with.

Scientists have proven that tea significantly lessens the risk of diabetes, helps to regulate blood flow and its massive amounts of antioxidants reduce your chance of getting sick.

Other studies show black tea is a stress buster and its soothing effects help us to concentrate. The Netherlands National Institute of Public Health and the Environment and the Boston University's School of Medicine also say black tea reduces your risk of getting a stroke.

So, think of Turkish tea as Mother Nature’s prescribed medicine!

Sevmek Cay Gibidir Sevilmek Seker Bizim Gibi Garibanlar Cayi Sekersiz - To love is like tea, to be loved is like sugar. The poor like us drink their tea without sugar. (Turkish proverb)