In Turkey, between the traveller's perennial favourite historic sites of Ephesus and the crowd-pleaser of Bodrum's Castle of St Peter, lay three under-rated, but just as inviting ancient ruins: Didim's Temple of Apollo, Miletus and Priene.

Sitting within 30 minutes’ drive of each other off Turkey's Western Coast, the two ancient cities and oracle temple can all be visited on the same day. The majestic beauty of the Temple of Apollo sits on the outskirts of the modern town of Altinkum, whiles the ruins of Miletus and Priene, are near the traditional, working town of Soke. 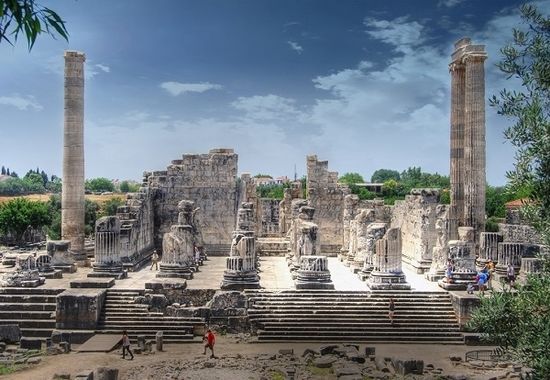 The Oracle of the Temple of Apollo

Didim, or Didyma, means twins, particularly Apollo and Artemis, the offspring of Zeus, the God of gods in the Greek Pantheon. The Ionians or Greeks dedicated the present-day remnants of the temple, the fourth of its kind on the site, to Apollo, while a smaller Temple of Artemis was built at nearby Miletus.

An initial temple, built on the source of a sacred spring was managed by a high priestess who acted as an oracle, giving announcements that were interpreted by the Branchids caste who managed the site, and claimed to be direct descendants of Branchus, a youth favoured by Apollo.

The first-ever temple was a humble structure replacing a much earlier sanctuary. However, in the 6th Century BC, due to the influential sway of the oracle in the world, citizens of nearby Miletus constructed a second, larger temple - the third on site - and one that would have been wider and as long as the Parthenon, in Athens.

Regarded as the fourth largest in the ancient Greek world, it was second only in importance to the Delphi, in Athens. In 494 BC, Darius, the Persian King, destroyed the site, plundering its treasures. Local legends said when the Branchids were cast out, the spring dried up and the Oracle stayed silent.

Then Alexander the Great conquered Miletus in 331BC and the Oracle quickly came back to prominence. Thirty years later, the Milesians, having recovered from Alexander's crippling taxes, began building a new temple on the site, which, if completed, would have been the largest in the Hellenic world.

The Oracle remained an influence and was the root of the Roman Emperor Diocletian's persecution of Christians in 303AD. Constantine the Great who later rose to Emperor, converted to Christianity, and closed the Oracle and slaughtered its priests. Then, a Christian basilica was built at Didyma. The site remained as it did until an earthquake in the 15th century reduced it to rubble.

Extensive excavations over the last century have revealed the hidden treasures of the Temple of Apollo. Initially, 122 Ionic columns, 60 feet high and six feet in diameter surrounded the temple, but today only three remain. Fourteen steps to approach the temple led to the roofed chamber with two of the Ionic columns that show the way to two small chambers.

The adyton, where only priests and oracles had access, would have been in the Western part and within that, was a chapel where the priestess gave her pronouncements. Today you can see where in Roman times, the stadium aligned to the south-east side and the steps leading down the Temple were used as seating. Names inscribed suggest families had 'season ticket seats' for the games. Just off site is the Sacred Way, a 20-kilometre route from Miletus to Didyma, enabling pilgrims to make their way to participate in the annual spring festival. 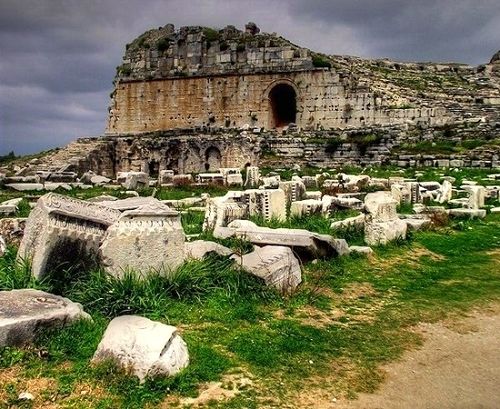 Ruins of the Ancient Greek City of Miletus

Miletus, renowned for its massive 25,000-seated Roman theatre, was once an exceptionally important sea trading port and one of the greatest Greek cities for 1,400 years. In the ancient era, it stood at the mouth of the River Meander and was an influential trading area for Asia Minor.

Many invaders took and lost Miletus throughout the ages, but its more famous sons included Hippodamus, who introduced the grid-like system, reproduced across cities in the Roman Empire; and the likes of Thales, widely seen as the founder of science. Isidore of Miletus was the architect of the Hagia Sophia.

Miletus, mentioned in Homer's The Iliad, was sacked by the Persians in 499 but rebuilt under Alexander the Great's reign and rose back to prominence during Roman times. However, it fell into decline and nature finally nailed its fate due to the silting of the Meander over many centuries. Reduced to a small village during Ottoman rule, locals abandoned it in the 1800s. Artefacts from the ancient city are on display at Berlin's Pergamon Museum or at the local Miletus Museum. 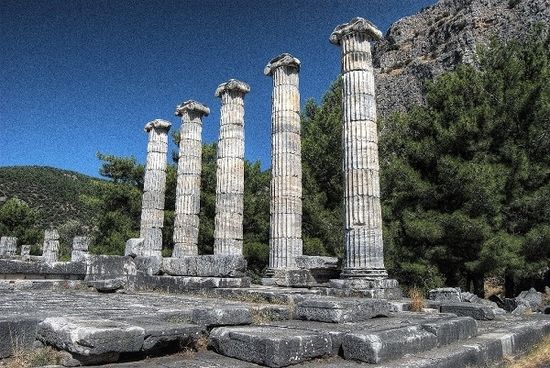 The Ancient City Ruins of Priene

The most northerly of the three important cities, Priene stands on the steep slopes of the base of Mount Mycale. Initially serving as a port, it was later colonised by the Greeks and Alexander the Great.

Alexander the Great helped to finance the Temple of Athena and dwellers in the 4th Century BC city quickly followed suit. What survives today is one of the best-preserved Greek cities of the day. One of the two most significant finds during excavations is the 9th century Priene Calendar whose inscriptions predict the coming of potentially both Augustus the Roman Emperor and of Jesus Christ.

The second is the Priene Inscription dedicated to Alexander the Great recording his financing of the temple and resolutions between neighbouring kingdoms after his expelling of the Persians. Today's ruins include the Temple of the goddess Athena Polias, the theatre, agora, gymnasium, city walls, and the Bouleuterion

Efforts are now underway to include the Apollo Temple and Miletus on UNESCO’s World Heritage List. It may well be that these under-rated sites will again rise to prominence for an entirely modern day reason - tourism.

Further Reading: See our Area guide for the Altinkum region of Turkey, close to the temple of Apollo and a popular town for expat living.