BLOG All About the Izmir Province of Turkey

The Izmir Province of Turkey

To visit the Izmir province of Turkey is to gain an insight into one of the country’s most cosmopolitan areas. Long holding a reputation as a forward thinker and leader of western trends, the region continues to draw people in from around the world, for both tourism and foreign house sales. Its reputation for diversity and excellence is not newfound either and stretches back far into the days of the Roman empire.

Even during Ottoman rule, it was a leader of trade and economy. Perhaps the most devasting moment in its history was the great fire of Smyrna (former name) in 1922 that destroyed much of the city centre. However, history shows Izmir was resilient and bounced back to become a top business, education, and tourism hub of Aegean western Turkey.

The Izmir Province of Turkey

How to Get Here: Izmir has its own ultramodern, award-winning airport called Adnan Menderes. It operates year-round flights although the schedule is more frequent during summer. Additionally, if arriving from other parts of Turkey, head to Izmir central bus station (otogar). The new Istanbul highway means getting here from Turkey’s most significant metropolis takes just 4 hours. Additionally, the peninsula is well connected via other major roads. If arriving by sea, the city centre and Cesme are official points of entry.

When to Visit: Your planned activities will dictate the best time to visit. The beach tourism season runs from May to October. The hottest months are July, August, and September when temperatures can often reach the mid-40s. Avoid the rainy season from January to February, and to get out and explore, visit anytime between March to June, and October to December.

Where to Eat Out: The province has many restaurants serving up delicious Turkish cuisine, but two most notable neighbourhoods are in the city centre. The Alsancak and Kordon areas are well known for their seaside fish restaurants and nightlife. Serving up delightful Turkish mezes, as well as seafood like calamari and shrimps, to eat here is to eat where the locals go.

What to See in Izmir 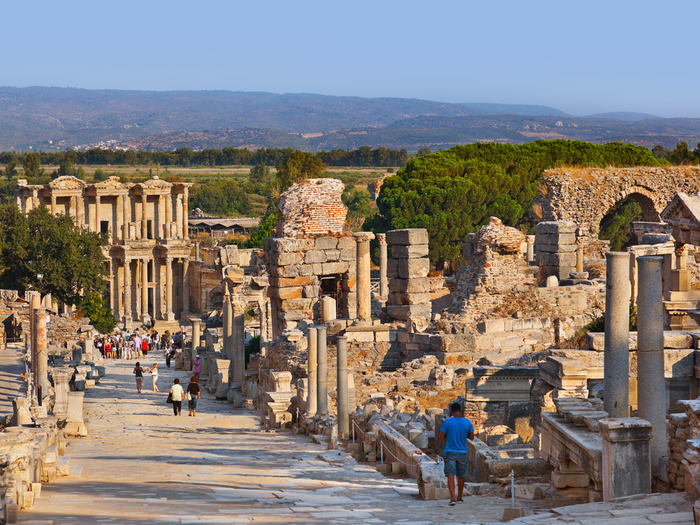 Ephesus Ancient City Ruins: Ephesus is not only Izmir’s top-visited attraction but also one of Turkey’s. This marvellously excavated Greco-Roman city includes significant landmark buildings like the Celsius library, a large theatre, Roman terraced houses, temples, and the agora. Sitting in the Selcuk district, we recommend an overnight stay so you can also visit other major attractions from the ancient world like Saint John’s Basilica, the Virgin Mary’s house, and the Artemis Temple, one of the seven wonders of the ancient world.

Pergamon: This ancient Greek city is also a respected historical site in Turkey. Sitting within the Bergama District, it was a major centre for cultural and excellence. They invented parchment paper in the 2nd century BC and set up the world’s first psychiatric hospital. The top landmark, the ancient theatre, is known for its steepness and nestled into a hillside.

Konak Square and Kemeralti: An unwritten tradition says to have your photo taken by the clock tower, the city’s principal landmark in Konak square. After shop for souvenirs and enjoy the historical ambience of Kemeralti that throughout history has acted as a major shopping centre. This area is also where the Ethnography and Archaeology Museum is.

Izmir Agora: Sitting close to Konak square, the agora is delving far back into Izmir’s history. An earthquake destroyed the original version but the version we see today dates from the time of Roman emperor Marcus Aurelias. The ancient ruins are currently on the UNESCO World Heritage tentative list. 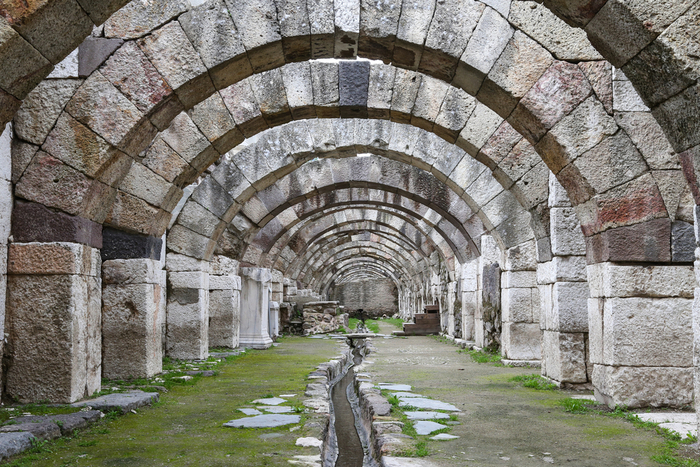 Kadifekale: This castle, whose name translates into velvet castle, sits on a steep hill, so ideally use a taxi or car to get up there. The reward is a picturesque coastline and city view. This site is also where Saint Polycarp was martyred.

Asansor: Translating into the lift, the Asanor in the Karatas district is a quirky landmark building dating from 1907. Originally built to bypass the steep hill, these days the rooftop terrace serves as a restaurant and great viewpoint.

Izmir Wildlife Park: No matter whether young or old, the wildlife park is a great day out. As home to many species of animal including giraffes, elephant, crocodiles, lions, monkeys, and elephants, children and adults alike enjoy the tour.

Best Beaches: Naturally as a peninsula, there are numerous sandy beaches, coves, and bays to hang out in during summer. For beaches, the Cesme coastal resort is where to head to. The 2-kilometre Ilica beach is the most popular but also check out Pirlanta, Altinkum and Mavi Koy with its crystal-clear waters.

Also Do: Alacati coastal resort earns country and worldwide admiration as a surfing spot. Additionally, many people arrive on day trip excursions to see its famous whitewashed cottages with blue shutters. Alacati is a bit pricey, and that’s understandable as an upmarket destination favoured by Turks who often buy summer holiday homes there.

Where to Shop: As well as browsing through the Kemeralti grand bazaar, numerous shopping malls like Optimum and forum Bornova are great places to empty your purse. This is where you will find brand name Turkish and international labels, but for a bit of traditional, find out where the local weekly market is, wherever you stay.

Notable Districts of the Izmir Province

Balcova: Sitting between Cesme and Izmir city centre, Balcova is well known for its three shopping malls, thermal springs and as home to Inceralti Sea Museum. For a quirky excursion though, catch the 316 kilometres gondola ride. Summit restaurants serve food and drink, so you can sit back and enjoy a fantastic view in peace.

Cesme: As mentioned above, the Cesme peninsula is all about surfing, swimming, and enjoying the Aegean Sea, but is also a central Turkish riviera sailing hub and boasts of a superb marina. Many Turks own summer homes here, and in the last ten years, increasingly more foreigners choose to buy property there. The fortress is the area’s prominent landmark.

Foca: This district built on the site of an ancient Greek city is another destination that is popular with Turks who want to own summer homes. Typically separating into new and old parts, many areas are under protection, because of flora and fauna thriving there, and endangered species like the Mediterranean monk seal. 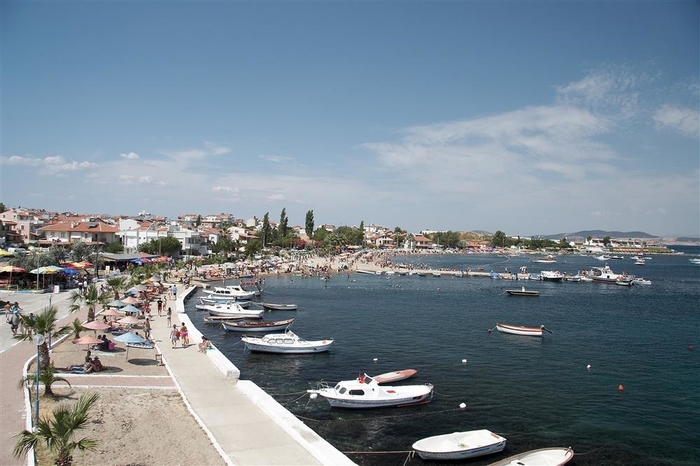 Karaburun: The district and peninsula with this name are not as famous as Cesme for mainstream tourism, yet it still attracts a healthy number of trekkers wowed by its landscape scenery. Karaburun, the province’s furthest northern tip takes roughly two hours to reach from the city centre.

Karsiyaka: Although it is a busy district, we recommend seeking out the old Levantine houses to understand and gain an insight into Izmir when it was called Smyrna. The Levantine community were influential traders, many of European descendant, that employed locals and put Smyrna on the map for international trading.

Seferihisar: Anyone who enjoys fresh food and cooking would do well to visit Seferihisar, that grows citrus fruits in abundance. Locals have also committed themselves to the Cittaslow movement. They promote the slow food concept of using local, fresh ingredients to promote regional, and traditional dishes.

Selcuk: Sitting at the furthest southern point of the peninsula, before the province goes into the Kusadasi area and Aydin region, Selcuk is the tourism hub, mainly because of the archaeological Ephesus ruins, Temple of Artemis, Saint John’s basilica and the Virgin Marys house. A few all-inclusive hotels also promote the long Pamuk beach although waves during Autumn make it unsuitable for children.

Living and Working in Izmir

As Turkey grows in prominence on the international scene, increasingly more foreigners look to buying property and living here. Those who work often end up in the teaching profession, although a TEFL certificate is required. Others are retired and rely on pensions for a source of income. As Turkey’s third-largest city, if you choose to relocate there, expect an urban lifestyle. Aside from that, for a quieter slow pace of life look to surrounding coastal resorts. This article about living in Izmir explains what draws people to the region.

What makes Izmir Famous? Izmir has many claims to fame stemming from its historical timeline to modern-day trends. In this article, we give a brief area introduction and then talk about what puts it on the map as a prominent destination.

About Us: We are Turkey Homes, investment, lifestyle, and property experts. With offices all over the country and local staff, our expert knowledge of the Turkish housing market has helped many people buy property in all districts including the Izmir province. Get in touch with us, if you want to know more about investing in Turkey.