BLOG American Movies Shot in Turkey That Are Worth Watching

It may surprise you to know that many American movies shot in Turkey have broken box office records. To make a blockbuster film, you need creativity, inspiration, and passion and Turkey gives all that and much more, easily explaining why many famous directors often choose the country for their works of art.

They aim to move worlds and evoke emotion, whether it is a work of fiction or historical drama, and Turkey’s landscape setting, historical sites, people and culture provide the perfect platform. Another reason for the country’s big screen popularity is incentives offered by the Turkish government, which can save financial backers a lot of money.

Specialised Turkish companies are also on hand to act as location and extra scouts or help when vital pieces of technology break down. Indeed, Turkey is a filmmakers paradise that has paved the way for some blockbusting films featuring international celebrities.

The Water Diviner: A Glimpse into Australian and Turkish History

Russell Crowe, who also took turns at directing, is the big name in this film about an Australian man, who travels to Turkey to find his three sons, who all fought in the infamous Gallipoli Battle. Based on the book of the same name, it is fiction, but its roots lie in a true story.

Lieutenant colonel Cyril Hughes who worked in the Imperial War Graves Memorial at the end of WW1 wrote a single line in a letter. It said “One old chap managed to get here from Australia, looking for his son’s grave.”

Many decades later, researchers tried to find out who this man was. However mass disarray and Greek invasion left no clues at all. Thus, authors Andrew Anastasios and his wife Meaghan Wilson imagined what could be the actual story and put pen to paper. Russell Crowe scouted the locations himself and visited Edirne, Cappadocia, Istanbul and Fethiye.

Filming of the first half took place in Australia, then the crew came to Turkey for the second half, shooting scenes in the Blue Mosque, and Balat neighbourhood in Istanbul, and on the Gallipoli peninsula. However, the emotional, tear-jerking scenes between father and son shot in Fethiye’s abandoned Kayakoy village stole the show. 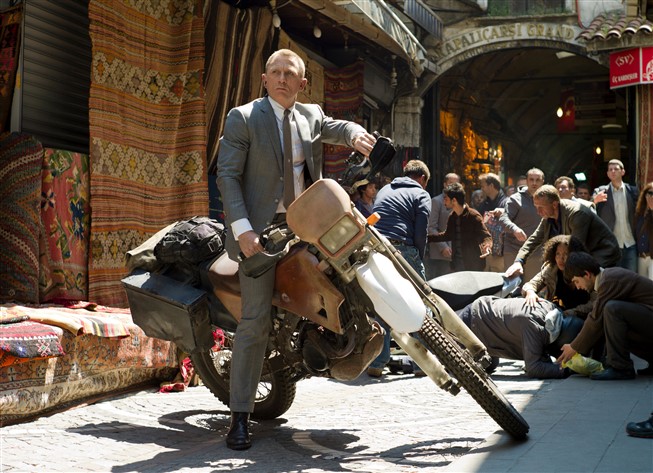 Turkey was the opening scene for the 23rd James Bond film, featuring Daniel Craig as the English daredevil spy. Chasing a mercenary through Eminonu square, they eventually end up on the Ottoman Grand Bazaar roof, a scene that naturally outraged historians because it desperately needed urgent repair and restoration.

The next scene shot took place in Adana on the Varda Viaduct, but things went wrong because Money Penny accidentally shoots James causing him to fall off the train, and into water under the viaduct.

In true Turkish style though, it turns out James just took a holiday, while leaving all his colleagues at MI5 to believe he was dead. Cue the Fethiye region, in particular, Calis Beach. However, fans who want to replicate the drinking scene will be disappointed because the bar was built purposefully for filming.

To follow in Daniel Craig’s footsteps, head to the Yacht Classic hotel in Fethiye and book the luxury penthouse suite he stayed in. They renamed it, the 007 James Bond Penthouse in his honour. Russell Crowe also stayed in a villa at the same hotel. Otherwise, watch from Russia with Love and the World is Not Enough because scenes from Istanbul feature in them as well.

In November 2011, acclaimed actor Liam Neeson came to Istanbul to film most scenes for his follow up film Taken 2, in which he gets to beat up bad guys. The plotline revolves around retired CIA agent Bryan Mills who meets up with his family in Istanbul for a leisurely break. However, Bryan’s enemies kidnap him and his ex-wife.

Dramatic scenes that follow showcase various parts of Istanbul, although many Turkish filmgoers criticise the film saying they were deliberately trying to make Istanbul, look Arabic. Film locations vary but include Galata Bridge, Grand Bazaar, a lot of rooftops and the Legacy Ottoman hotel. As with any action film, cars are blown up, friendships are tested, and the good guy always wins.

The Film Industry of Turkey: With an aim to take on Universal Studios and become the number one film centre of the world, Turkey also wants to educate the next generation of film directors and actors.

Famous Turkish Films and Soap Operas: Turkey is making a roaring trade by exporting their soap operas and films to adoring fan bases in many different countries. So, which popular Turkish dramas should you watch?