A Turkish subject that has been at the centre of confusion across the world for decades is the location of the historic country’s capital city. An incredible amount of people still to this day believe that Istanbul is the capital city of Turkey and they can be excused a little as indeed it was until Atatürk founded the Republic of Turkey in 1923, however its name was Constantinople. How the Turks reached the name of Istanbul is another story, but Ankara was declared the Republic’s capital city after the downfall of Constantinople and the demise of the Ottoman Empire during World War I. Istanbul was sieged and controlled by western powers until the declaration of the Treaty of Lausanne in 1923, after which western powers agreed to evacuate. Ankara had been Atatürk’s headquarters for three years by that point and its central position in Turkey made for a fantastic trade route and economic centre, so Atatürk decided to stay. 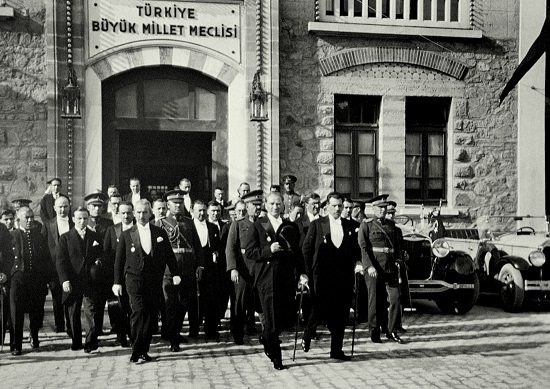 What was once a small town, Ankara has grown exponentially since the 1920s and is now the second most lived in city in Turkey after Istanbul. In 1927, Ankara was recorded to have a population of 75,000, but the city grew much faster than anybody had anticipated over the decades. Ankara is now regarded as home by 5,270,575 people as recorded in January 2016. In 1923, Ankara was designated as a planned city for half a million future inhabitants, but in the 1950s as unemployment in rural areas forced people to move into the city, Ankara became massively oversubscribed. This led the building of many illegal houses called ‘gecekondu’ which began to pop up around the city, causing the uncontrolled urban landscape of Ankara and its unforeseen growth. While some ‘gecekondu’ do still exist, with running water and elctricity, most have now been replaced by public housing projects in the form of tower blocks.

The Economic Centre of Ankara

As Ankara is the political and economic centre of Turkey, the government is a prominent employer in the city, but Ankara is also an important commercial and industrial city, thanks to its location at the centre of Turkey’s road and railway networks. As well as acting as a major trade hub for exports passing through the country into Europe, Ankara has its own local produce which has been sought after for centuries. This includes a renowned natural product of Ankara, its indigenous type of honey, ‘Anakra Balı’, known for its light colour, and locally produced wine. The Central Anatolia Region is one of the primary locations of grape and wine production in Turkey and is particularly famous for its ‘Kalecik Karası’ and ‘Muscat’ grapes. ‘Kavaklıdere’ is the oldest and best known winery in Turkey, produced in the Çankaya district of the city. 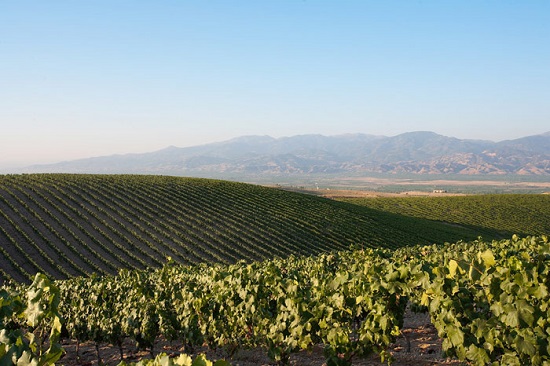 The city was once known as Angora among the Europeans following its annexation by the Selçuk Turks in 1073 and the city gave its name to the Angora wool shorn from Angora rabbits, the long-haired Angora goat, a source of mohair, and the Angora cat. The city has exported mohair and Angora wool internationally for centuries and in the 19th century, also relied on the sale of goat and cat skins. Just before the First World War, Ankara was connected to Constantinople by railway and so the exportation of mohair and wool to Europe continues to this day.

Natural resources aside, Ankara has become the business hub of Turkey outside of Istanbul. Apart from local government jobs, the city is also a hot spot for foreign citizens who work as diplomats or clerks in the embassies of their home countries. Ankara is also the centre of state-owned and private Turkish defence and aerospace companies. The industrial plants and headquarters of firms such as Turkish Aerospace Industries, Havelsan and Roketsan among others, are located in Ankara and exports to foreign countries from these firms have steadily increased in the past decades. A number of global automotive companies also have production facilities in Ankara. 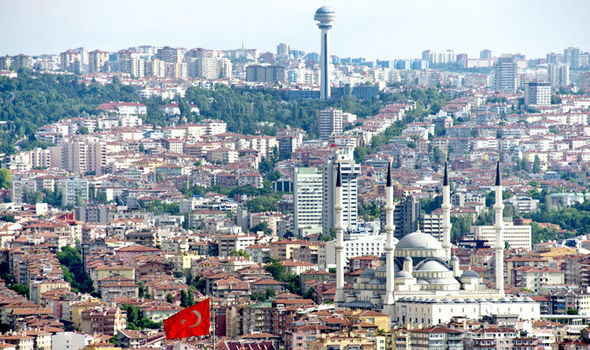 The city of Ankara, regarded as a province, has no less than 25 districts associated with it. However sprawling the city is, the real places of interest are in the very centre. After Ankara became the capital of the newly founded Republic of Turkey, new development divided the city into an old section called ‘Ulus’ and a new section named ‘Yenişehir’. The old section of the city is contained in and around the city’s ancient citadel and if history is what you seek, this area would be your perfect base. If the many ancient ruins aren’t quite enough for you, the ‘Ulus’ area has a wealth of museums dedicated to excavated artefacts.

The new section of the city is for the more cosmopolitan visitor, with wider streets, large hotels and modern shopping malls. For fantastic views across Ankara, head to Çankaya’s Atrium Mall and the Atakule Tower where the city’s panorama can be enjoyed at leisure. ’Yenişehir’ is also regarded as the cultural hub of the city, where the theatres and orchestras of Turkey perform in newly built halls. There is no denying that the new section of Ankara has been designed to draw in visitors, with the addition of must see sites such as the Atatürk Mausoleum and modern art museums. This year the capital city added an impressive Botanical Garden to the list of things to do in Ankara

Ankara is a very old city with various Hittite, Phrygian, Hellenistic, Roma, Byzantine and Ottoman archaeological sites. The historical centre of town is a rocky hill rising 150m which is crowned by the ruins of the old citadel and offers incredible panoramic views of the city. The old town of Ankara, ‘Ulus’, is marked by many narrow winding streets and is home to many ancient buildings reflecting Roman, Byzantine and Ottoman history. 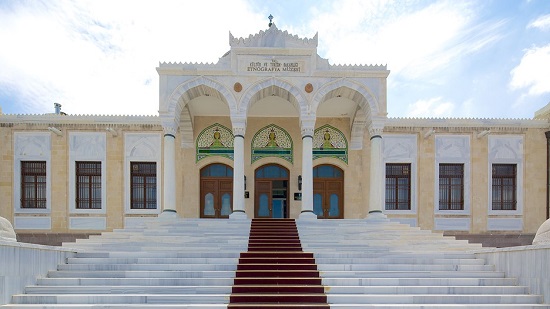 The area is also scattered with museums dedicated to the history of the city, such as the Ethnography Museum, once the resting place of Atatürk, which has a fine collection of folkloric artefacts from the Seljuk and Ottoman periods. The War of Independence Museum was originally the first Parliament building of the Republic of Turkey. The War was planned and directed from here as recorded in various photographs and items on display. Another of great interest is the Museum of Anatolian Civilisations, situated at the entrance of Ankara Castle, set in a restored 15th century Ottoman bazaar.

Ankara Castle and Citadel dates back to the medieval era. The foundations of the castle and citadel were laid by the Galatians and the rest was completed by the Romans; the Seljuk Turks captured the castle in 1227. The outer citadel surrounds old Ankara and 42 pentagonal towers decorate the walls. The inner castle covers an area of around 43 km squared and this is regarded the oldest part of Ankara, with many fine examples of traditional architecture. One of the most remarkable surviving examples of Roman architecture in Ankara belongs to the castle; the Temple of Augustus and Rome. The Augusteum, as it was once known, was built after the death of Augustus, the first Roman emperor, in 14AD. A copy of the text of his funerary inscription, ‘Res Gestae Divi Augusti’, was inscribed on the interior of the temple in Latin and a Greek translation was added to the exterior wall. The complex also boasts a Roman Road, Roman Baths and the remains of a Roman theatre, including the stage and backstage areas.

For visitors there are recreational areas to relax and many restored traditional Turkish houses have now become restaurants serving local cuisine. The castle also offers some of the best panoramic views of the city below.

One other must see sight in old Ankara is ‘Suluhan’, a historical inn, also known as the Hasanpaşa Han. According to the inscription of the building, the Ottoman era inn was commissioned by Hasan Pasha, a regional beylerbey and was constructed between 1508 and 1511, during the final years of the reign of Sultan Bayezid II. There are 102 rooms, now shops, which face the two yards. In each room there is a window, a niche and a chimney. The historical inn can be found about 400 metres southeast of Ulus Square. 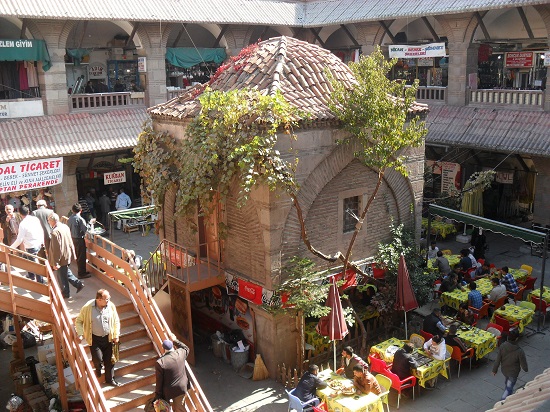 The new town centres around Kızılay Square, home to government offices and foreign embassies but also to the modern cultural hub of the city. The Cer Modern was opened in 2010 and is located in the renovated workshop of the Turkish State Railway. The museum is contains the largest exhibition hall in Turkey and displays periodic exhibitions of modern and contemporary arts events. Ankara is also home to Turkish State Theatres, the official directorate of the national theatre companies in Turkey. The directorate owns more than 52 stages in 19 different cities across the country and stages about 120 productions a year, reaching an audience of approximately 1.5 million each season. The city is also served by several private theatre companies and five classical music orchestras, including the Presidential Symphony Orchestra. Thanks to the growing trends in Ankara, the city has seen recent additions to its cultural infrastructure such as the conversion of the Ankara Opera House and the opening of the CSO concert hall in 2015, the most modern venue in Ankara.

The most visited place in Ankara and the first stop for visitors, is the mausoleum of Mustafa Kemal Atatürk, the first President of the Republic of Turkey. The site chosen for Anıtkabir was Observation Hill, a central location in Ankara which could be seen by all parts of the city. Construction took nine years and involved the excavation of artefacts belonging to the Phrygian civilisation, which are put on display at the Museum of Anatolian Civilisations. All stones and marbles used to build the mausoleum were brought in from various parts of Turkey. There are four main parts to Anıtkabir; the Road of Lions, the Ceremonial Plaza, the Hall of Honour and the Peace Park that surrounds the monument.

The Road of Lions is the approach to the monument, a 262m pedestrian walkway that is lined on both sides by twelve pairs of lions, carved in a style like the Hittite archaeological finds. A five centimetre gap separates each of the paving stones on the road to ensure that visitors take their time and observe respectful behaviour on their way to Atatürk’s tomb. The Ceremonial Plaza is situated at the end of the Lion’s Road and is decorated with 373 Turkish carpet patterns. This leads to the Hall of Honour, the location of Atatürk’s tomb. The Peace Park surrounding the complex was named in honour of Atatürk’s famous expression, “Peace at home, peace in the world”. It contains around 50,000 decorative trees, flowers and shrubs in 104 varieties, donated from around 25 countries.

Within the site, there are ten towers situated in a symmetrical arrangement, each symbolising the ideals that influenced the Turkish nation and the creation of the Republic of Turkey. Inside each tower are inscriptions of quotes by Atatürk that correspond to the theme of that tower. The female statue group stands in front of the Independence Tower, a tower of three women in Turkish national costumes, representing the pride of Turkish when and their solemnity and determination even in grief and hardship. Another of note is the Tower of Reforms where Atatürk’s garments are exhibited. The relief inside the tower wall shows a weak hand holding a torch that is about to go out, symbolising the downfall of the Ottoman Empire. A strong hand raising a radiating torch to the skies symbolises the reforms with which the new Turkish Republic and Atatürk raised the Turkish Nation to the level of contemporary civilisation.

Tolga Ertukel, Founder of Turkey Homes says: '' While Istanbul may be the perfect Turkish city for ancient history, Ankara has a past of its own which deserves to be explored. For anybody with an interest in Atatürk and 20th century history, Ankara is the place to be. Visit the core of Turkey and feel its heart beat with history, culture and new beginnings.''