4 Famous Landmarks in the Eyup Area

Stretching from the Black Sea down to the Golden Horn shoreline, the Eyup area of Istanbul is slowly growing in popularity as increasingly more tourists and property buyers look towards the neighbourhood that has shed its past mistakes and reinvented itself as a desirable place to live and work.

Looking back into its historical past, Eyup was the first Ottoman settlement outside the old city walls of Constantinople. It enjoyed much success, but by the 1950s, tales of pollution by large factories lining the shores of the Golden Horn blighted its reputation. People rarely bought houses in the area, and over the following decades, as tourism came to Turkey, it was largely ignored.

As the 21st century came around, government officials were keen to get rid of early urban planning mistakes and give Eyup back a sense of pride that it so rightly deserved. Their community projects and revised urban planning projects worked and the area can once again stand tall and proud.

Eyup is home to many Islamic buildings and Muslims around the world highly admire and respect the area, and often make pilgrim trips to honour its Islamic importance. Global travel trends have also affected Eyup.

These days travellers want to experience cultural and local vibes by getting away from the main tourist attracts. Eyup presents the perfect diversity they seek, and attracts many people of different faiths and nationalities. Tourism isn’t the only sector benefitting from a revival in Eyup’s popularity because Middle-Eastern investors are also purchasing homes, in a district that speaks to their hearts.

4 Famous Landmarks in the Eyup Area

Marvel at the Maglova Aqueduct

Without a doubt, Mimar Sinan was the Ottoman Empire most favourite and celebrated architect. His works and monuments are seen in many landmarks’ buildings and construction through Turkey. In the Eyup area, tourists and locals can admire his ingenuity through the Maglova Aqueduct in Alibey Creek district. Standing at 36 meters high and stretching for 258 meters, the two-level stone structure is still in full working order and can claim its place on the list of impressive ancient aqueducts around the world.

Take a Ride in the Eyup Cable Car

Cable cars must be the most pleasant mood of transport. There is something surreal about seeing the landscape from a bird's eye view, and once you ascend in the Eyup cable car (called teleferik in Turkish), the Golden Horn’s stunning beauty and its shoreline neighbourhoods appear in sight. To get to the cable car office, take the 99 bus from the main station. Running every day from 8 a.m. locals say the best time to ride is at sunset, and you can use Istanbul Karts to pay for the tickets.

The short ride only takes a few minutes, but we recommend making an afternoon out of it, by spending time at Pierre Loti Hill (tepesi) at the top. From there, it’s a short walking distance to Eyup Sultan Mosque and Tomb, which can be seen on the way down instead of descending in the cable car.

The Abu Ayyub al-Ansari tomb sits within the famous Eyup Sultan Mosque, and its importance for Muslims is not to be underestimated. Found after the conquest of Constantinople in 1453, the tomb was rebuilt by Sultan Fatih Mehmet in 1459.

The tomb that is open to the public receives hundreds of pilgrims every month as they seek to pay homage to the man who was the Prophet Muhammad’s companion, and for whom many say, led the first spiritual conquest of Istanbul. The district is also named after him.

Many foreigners think the Sultan Ahmed Cami (blue mosque) is the most important religious building in Turkey, but the two minarets Eyup Sultan Mosque with its stunning architecture is even more sacred.

Muslims often make pilgrim visits while tourists seek out the mosque to get to know about Eyup, one of Istanbul’s most conservative areas. Friday is naturally a busy day given that it is the Islamic holy day, but tourists are welcome every day outside of prayer times.

The community vibe just outside the mosque is as just as luring as the buildings itself. Vendors selling scarfs, the Quran, oils, Islamic music and more, and on some occasions, when the weather is good, an Ottoman band plays to the masses. Since the mosque holds the tomb of Abu Ayub al-Ansari, it is naturally one of the most important Islamic landmarks in Turkey.

Initially built in 1458, it suffered much damage over the centuries that followed, so in 1800, the government restored and renovated it using a baroque architectural style. The domed interior, highlighted by a large chandelier and impeccably clean mosque is stunning and worth seeing, whether you are religious or not.

As Turkey’s biggest and most populated city, Istanbul is naturally an urban landscape of the hustle and bustle. Yet, to find peace among the fast-paced day to day living, the Pierre Loti Hill is the place to head to.

Overlooking the Golden Horn, the unusual, non-Turkish name stems from the famous French writer Pierre Loti, who spent time in Istanbul during the latter half of the 19th century. He found solace from this hill that gave him stunning views as far as the eye can see and inspired him in much of his poetry and novels. A cafeteria at the top serves coffee and tea so all you must do is take a seat and enjoy one of Istanbul’s most stunning landscape views.

In 2018, foreign real estate sales in Istanbul reached an all-time high. As a lucrative exchange rate and incentives like the Turkish Citizenship Investment Scheme boosted its popularity internationally, Middle-Eastern nationalities flocked to take advantage of current market conditions, and they adore the conservative vibes of Eyup. Seeing many similarities in culture and of course, with much connection to historical Islam, the area suits them perfectly.

The real estate industry also says that when it comes to buying a home, location is everything, and in the case of the Eyup area of Istanbul, this is spot on. It is just 30 minutes’ drive from the new Istanbul third airport, a 25-minute drive over the Golden Horn to Taksim square, the heart of new Istanbul and a shopping hub of magnificent multitude.

As Istanbul seeks to reinvent its real estate market through new build homes with the latest in architectural styles and home technology, off-plan 1, 2 and 3 bedroom apartments are appealing to buyers. 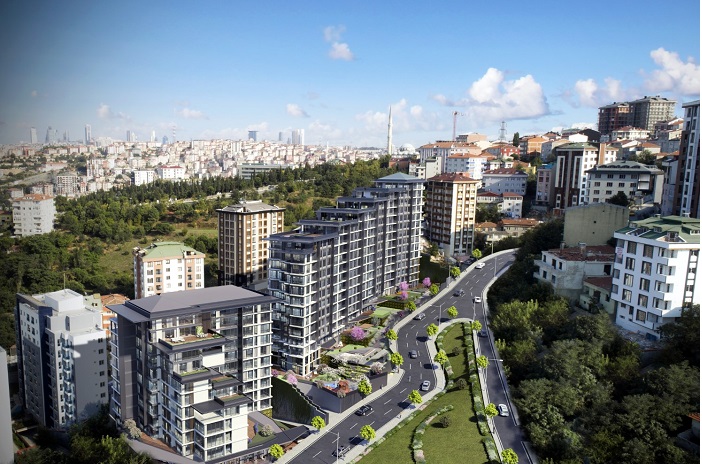 Given Eyup’s reputation, conservative families highly rate the area, and the new build apartments reflect this through communal facilities like landscaped gardens, restaurants, shops, basketball courts, gyms, children’s playparks, onsite security and much more. Private balconies enable residents to make the most of summertime, while insulation keeps them warm in winter. Fitted kitchens and bathrooms mean all a buyer has to do is move in!

Tip for Property Buyers: When looking at homes for sale in the Eyup area, the Alibeykoy neighbourhood is emerging as a top destination, especially for first-time buyers in Turkey and for those on a budget. As well as being in a central location with a wide range of shops, bank, transport links, schools and more, prices per square meter of homes are incredibly affordable. See an example property for sale in Alibeykoy here.

Districts of Istanbul: Spread over the European and Asian sides of Istanbul, 39 areas form this great city. Whether you are a tourist or home buyer, each has something unique, and is worth exploring if you want to know Istanbul beyond the guide books.

Seven Hills of Istanbul: This vast city was built on seven hills, in an attempt to match and overtake Rome. In this article, we look at where those seven hills are and what people can expect to see when visiting them.

Property for Sale in Istanbul: Potential buyers in the city will enjoy browsing through our vast portfolio of apartments and villas for sale in Istanbul.