The fashion, retail and entertainment scene in Istanbul has been flourishing over the past decade with these lifestyle industries attracting billions of dollars of investment at home and internationally. The multi-cultural city of Istanbul merges Europe with Asia physically, architecturally and materialistically with influences from major European cities such as Paris, Milan and London and the city is now the retail hotspot of Turkey. Shopping and entertainment has become the lifestyle and leisure choice of families all over the world since the 1980s thanks to the combination of readily available global fashion and easy access to huge leisure facilities such as multiplex cinemas and family attractions and the ability to make all of these services available under one roof.

Istanbul’s 15th century Grand Bazaar may have been the first and still is the largest covered shopping centre in the world, but the suburbs are clearing the way for the rise of American mall culture; shopping centres designed to entice customers into a controlled environment, with the added draw of adjacent, state of the art entertainment complexes. Global retail sales are expected to top $27 trillion by 2020 even without the inclusion of travel, event ticket and restaurant sales and having all of these services available under one roof is big business, creating a captive market. While Turkey’s urban cities are cautious to retain their historical charm and traditional shopping bazaars, modern communications, ease of travel and media influences from Europe on top of a flourishing fashion industry and retail economy have made the growth of luxury shopping malls and entertainment complexes in Turkey inevitable.

Dubbed as Istanbul’s “newest landmark attraction, adding a new dimension of convenience and enjoyment to residents’ lifestyles” and a “must see fashion, shopping, entertainment and gastronomy destination”, the newly opened Emaar Square Mall is set to welcome in excess of 25 million visitors in its opening year. As Turkey continues to attract global interest and large investments from the world of fashion and shopping, foreign brands and international labels are cashing in on this growing Turkish economy, taking advantage of the new retail space available at this brand new luxury shopping complex. High-end designers such as Gucci, Armani, Cartier, brands like Samsung and Apple and leading department stores such as Galeries Lafayette from Paris are taking up residence in Istanbul’s latest grand mall creation. 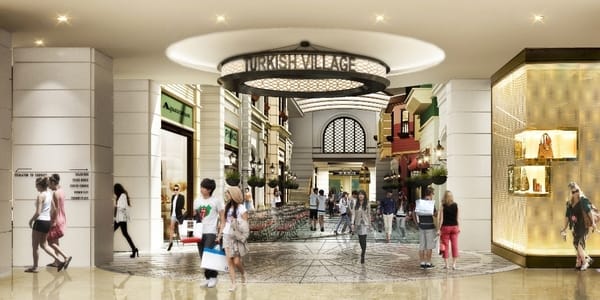 Emaar Sqaure Mall is the brainchild of property development company Emaar Turkey, founded in Istanbul in 2006 as a subsidiary of UAE development and management giant Emaar Properties, the company behind Burj Khalifa; the tallest building in the world. Emaar Properties was the first property company in the world to offer shares to foreign nationals and now operates internationally with six business segments and 60 active companies in 36 markets across the Middle East, North Africa, Pan-Asia, Europe and North America. Known for it’s large scale projects, the company is currently working on a new plans to build a tower set to be taller than the Burj Khalifa in the Island District.

Emaar Square Mall has found its inspiration from the Dubai Mall, the world’s largest shopping centre by total area and the most visited building on the planet in 2011, attracting in excess of 54 million visitors. While Istanbul’s new shopping mall will be smaller, offering just 150,000 square metres to Dubai’s 350,000 square metres, and only 450 stores to Dubai’s 1,200, there are many similarities to be found in their designs. Both properties boast a contemporary urban lifestyle with an exceptionally diverse selection of dining and entertainment options. Istanbul’s new mall promotes luxury and comfort with opportunities to socialise, relax and spend quality time with family. There is a multiplex cinema, including a 4D cinema, a high-end hotel, residences, a range of restaurants and cafes and a brand new aquarium and underwater zoo, just like its Dubai counterpart. To give Istanbul’s Emaar Square Mall a little character though, inside you can find a “Turkish Village” and traditional Turkish Bazaar. 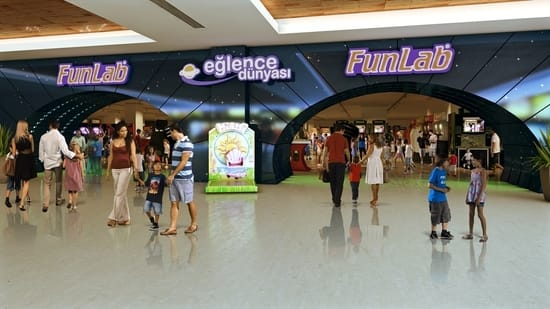 Emaar Square also offers three luxury residences with over 1,000 units ranging from 1 to 5 bedrooms as well as penthouse apartments. Two properties, The Residences and The Heights, which towers above the shopping mall, are already filled. The Address Residence partly a high-end, luxury hotel offering 183 rooms, sports a club house, outdoor and indoor swimming pools, a kids club, a fitness studio and gym, all of which are available to residents and guests. The vision here was beautiful, stylish housing designed for families with city living in mind.

This new retail space and entertainment complex is predicted to boost the Turkish economy by attracting a captive market, promoting spending and setting up additional employment for over 5,000 people. There is also a hope that the new mall will encourage tourists to plough money into the retail economy. Currently the percentage of tourists among shopping mall visitors in Turkey is around 2% and the government have set a major target of increasing this figure to 10% by the end of 2023. While this may be an ambitious goal, what Emaar Turkey has introduced a new way of shopping to the Anatolian side of the city, which could attract consumers from the Middle East and from rural areas of Turkey.

Emaar Square Mall can be found Çamlıca, set on a large hill in the Üsküdar district of Istanbul. It is a beautiful area of the city, offering panoramic views of the southern part of the Bosphorus and the mouth of the Golden Horn. Çamlıca has long been a popular tourist destination thanks to its historical teahouses and tea gardens, its quirky cafes and restaurants and the stunning public park with monumental trees, flower gardens and fountains. The area not only gives a fantastic perspective of the historical district across the water, but offers the opportunity to experience the slower pace of Istanbul life. Emaar Properties has invested $2.3 billion in Çamlıca to bring the area into the 21st century. 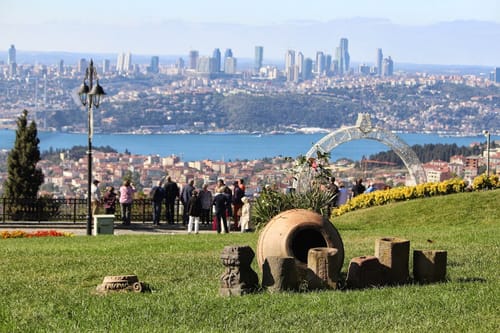 The new Anatolian mall is very close to expressway access roads and to the Eurasia Tunnel, making the property easily accessible from all areas of the city. There are also excellent connections to public transport with the mall offering direct access to the city’s metro and metrobus networks, as well as the new Havaray airport light rail project. The complex is also easily accessible from Istanbul’s Sabiha Göçken Airport, which handles a large number of domestic flights.

The Fashion of Istanbul

Istanbul fashion has becoming increasingly popular, not only in Turkey but all over the world. The growth of retail and fashion go hand in hand of course, and as Turkey is realising the potential of the retail market, fashion designers are capitalising on this growing market. With the large scale indoor malls come popular designers. As more and more people flock to these state of the art entertainment complexes within shopping malls, the realisation of a captive market in retail is becoming ever more successful. 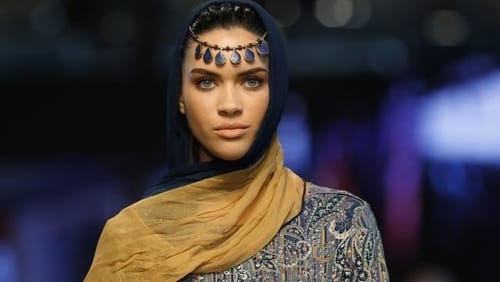 The Istanbul fashion scene is considered a reflection of the city’s vibrant youthfulness and creates an identity for the city. Women in Istanbul are said to spend an average of $100 per month on beauty and fashion, largely inspired by designers from Paris and Milan. This interest has opened up a whole new market for European designers such as Armani, Gucci, Chanel and Dior, all of whom have stores in Istanbul and are looking to expand into the luxury shopping malls of the suburbs where brands can introduce their new collections.

In February, Dilara Findikoğlu hosted a catwalk show in London and is now stocked at Selfridges across the UK, while being is championed by American singing sensation, Lady GaGa. Dora Teymur, regaled for his shoe collections, made his debut at London Fashion week this year. Les Benjamins is now a truly international brand, expanded from Istanbul’s hip area of Galata, with each season’s collection inspired by geopolitcal events. In the past he has taken inspiration from Les Jeunes Turcs, a political reform movement that existed during the Ottoman Empire; his aim is to bring modern-day Turkey to the world. Other Turkish designers such as Umit Benan, Günseli Türkay and Arzu Karol are also taking their collections to London and to Paris fashion week and are attracting high profile clients such as Mila Jovovich and Gisele Bündchen.

While Turkish and International fashion are beginning to converge there are two areas of fashion where Turkish designers are truly making a splash across the industry; ‘Eco-friendly Fashion’ and ‘Modest Fashion’. BOA Studio currently stands at the forefront of eco-fashion across the world. Based in Istanbul, the company’s mission is “to provide eco-friendly and aesthetically-wise designs that will truly become a part of your life”. Their clothes are an east/west blend of cool designs on stylish tees, sweatshirts, mini-dresses and kaftans, created by using 100% organic cotton. Fashion designer Nejla Güvenç also uses eco-friendly materials to create sustainable collections for her brand NEJ. Güvenç has been so successful, she has attracted the attention of “The Corporate Social Responsibility Programme of the Year in Europe” award under the “Steve International Business Awards”.

Turkish actors have been trying to raise awareness about cruelty free garments too. Recently Istanbul fashion designer Aslıhan Karahan put on a fashion show at Uniq Mall in the Maslak district if Istanbul, entirely focused on animal sensitivity and was hugely endorsed by famous Turkish actors like Begüm Birgören, Cemal Hünal, Çağla Şıkel, Gözde Kansu and Özge Özpirinçci, The runway motto was quite simply, “Take off your fur, put on your conscience”.

Perhaps most important is the emergence of ‘Modest Fashion’, a relatively new concept on the international fashion circuit. In 2016, Istanbul hosted the very first Modest Fashion Week, sponsored by Muslim fashion retailer, Modania. ‘Modest Fashion’, or conservative fashion, is a market that is growing by the day, with world-renowned designers starting to present their designs on the runways. The now annual event brings together globally-known designers, influencers, fashionistas and famous trendsetters to evaluate modest fashion styles from around the world. Modest fashion is expected to grow to an industry worth $327bn by 2020 and could mean mega bucks for designers who have an interest in Islamic dress. 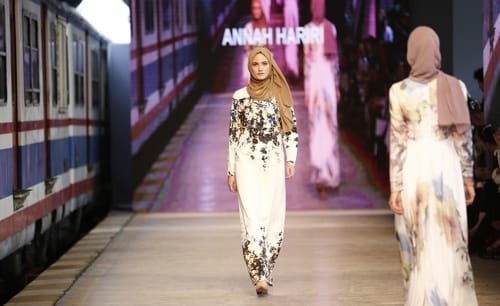 The term ‘Modest Fashion’ identifies fashion in line with Islamic principles, but designs are influenced by the socio-cultural characterisations of individual countries. Most designers agree that ‘Modest Fashion’ means loose clothing, comfortable dressing and covering of the body according to Islamic principles; the fashion promotes a shared interest in staying covered up, while still looking stylish and without being limiting. While Istanbul is considered to be the perfect launching point for ‘Modest Fashion’ with its ideal proximity between Europe and Asia, Modest Fashion Weeks have been celebrated internationally with Indonesian designer Anniesa Hasibuan creating history at the New York Fashion Week by presenting an extremely modest collection where every model walked in a hijab. Modest Fashion Weeks have also taken place in London and Singapore in the wake of its success in Istanbul.

With major designers and brands such as Dolce and Gabbana, H&M, Uniqlo and Max Mara showcasing collections in the modest fashion segment, this Istanbul born fashion trend is about to find its way into major shopping malls like the new Emaar Square Mall, where fashion trends and retail in Istanbul will meet in harmony.