BLOG From Fethiye to Olympos on a Blue Voyage Cruise

Sailing elegantly on a Blue Voyage Cruise from Fethiye to Olympos on the Mediterranean coast of Turkey is something everyone should do at least once in their life. The laid-back vibes and unique transport method ensure a smooth experience becomes a cherished memory for life. It is not so much the sailing, that makes defining moments because this can be done anywhere in the world. Instead, a Riviera lifestyle, historical places, and traditional villages capture overwhelming admiration from everyone. The Fethiye to Olympos Blue Voyage Cruise route is famous for first-time sailors, but the quirky accommodation is also a highlight.

For many centuries, Turks have been expert boat constructors, carefully shaping wood to form a streamlined vessel. The country, surrounded mostly by sea, ensured their trade was in high demand. Probably stemming from when the Ottoman navy was at its most expansive, they also carved superb boats for fishing and sponge diving. When the Fisherman of Halicarnassus (Cevat Şakir Kabaağaçlı) put Bodrum on the map by writing about his journeys around the peninsula in a sponge diving boat, traditional gulet boats evolved to become floating hotels.

These days, customers on sailing routes all around Turkey stay on a traditional gulet boat or similar vessel by either booking cabin or private charter. After embarking, the captains briefing goes over boat rules, as well as the itinerary for the next 4 days. On deck, a specially designated seating area is where freshly cooked food for breakfast, lunch, and dinner is served. BBQs are a favourite way of serving up dinner, especially when staff catch the fish just moments before.

Modern cabins with beds and en-suite bathrooms are comfortable bedrooms, or customers sleep on deck under the stars. Days spent sailing, swimming; snorkelling and exploring are timeless, with no need to watch the clock. Along with an incredibly low price for cabin charters, numerous historical and natural landmarks make it a fun-filled agenda of exploration. 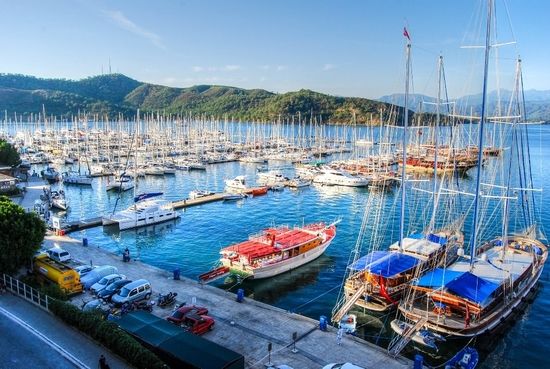 What to See on the Fethiye to Olympos Blue Cruise Route

Before setting off on the 4 days, 3-night blue cruise, it is worth arriving a day before to see Fethiye’s main attractions. Majestic Lycian rock tombs overlooking the central town are easily reached by bus, while Fethiye Museum is a marvellous collection of artefacts from various civilisations that lived in this area over thousands of years. A morning spent exploring the Ghost village of Kayakoy is also a remarkable trip in history to life in Turkey before the 1923 War of Independence.

Arriving at the boat, early the next morning, a short sail around the coastline takes you to three major attractions on the outskirts.

After a brief stop in Oludeniz to see the Blue Lagoon and one of Turkey’s most photographed beaches, arrive at Butterfly Valley, a small stretch of pebbled beach, fronted by perfect blue water for snorkelling and backed by a long canyon. Butterflies are hard to spot because their breeding season is short but a hike to the back of the canyon reveals small waterfalls and many colourful flowers along the way.

In the opposite direction, boats drop anchor overnight in the bay near Gemiler Island, where many people believe Saint Nicholas (Santa Claus) once lived. The beautiful sunset view and ruined historical churches make it one of the most popular stops on the Turkish Riviera. 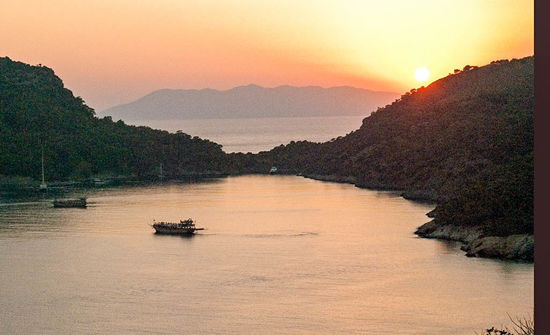 The next morning, the captain starts the engines early, to sail to Kas, a traditional village with much of its original charm sitting alongside signs of a modern life. Old Greek houses lined by pink bougainvillaea line the streets of the old town but a favourite hangout for expats is the seaside restaurants and bars.

Alternatively, some boats also drop anchor outside of Kalkan, the nearby resort with a status of wealth. The village enjoys much international admiration from influential property buyers interested in the luxury villa construction, and fantastic sea views evident from most properties.

An exciting part of the cruise is the sunken ruins of Kekova and the small and rustic Simena village. Kekova was a large city destroyed by an earthquake. The Turkish government banned scuba diving there because looters were stealing and selling ancient artefacts. A small beach leads inland to more ruins, but boats sail directly next to the coastline where visible remains of houses are under the water. 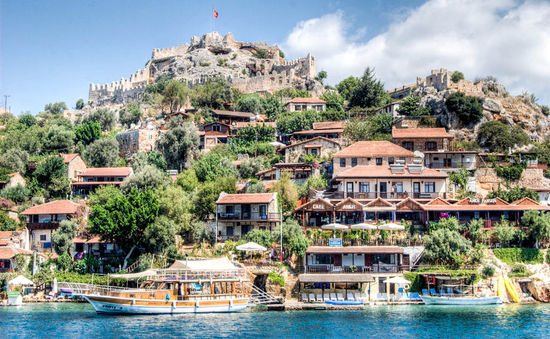 Making a sharp turn left, they continue across the bay, passing by Caretta turtles to arrive at Simena, well known for the view from its Byzantine castle. A steep cobbled path leads up to the entrance, but anyone with walking difficulties can instead enjoy Simena’s famous homemade ice cream in the rustic restaurants at the bottom.

Gokkaya Bay and Pirates Cave are the next attraction. This cave accessible only by water and Jet Ski could have been a hiding place in history for pirates. Boats generally dock in here for the night so customers can catch the water taxi to Smugglers Inn, the only bar in the area and a favoured place to party. Passengers often have a sore head the next morning, so the captain cruises gently to Demre Bay to disembark and catch the bus to Olympos. Just 30 minutes away, likewise it is worth staying overnight in Olympos to see the attractions.

What to See and Do in Olympos

The hippie-inspired village of Olympos uniquely offers treehouses as overnight accommodation, but anyone who wants a standard hotel room can stay in the neighbouring resort of Cirali instead. Sharing a large beach with Olympus, two attractions to visit near both resorts include the ancient city ruins and the burning flames of Chimaera. 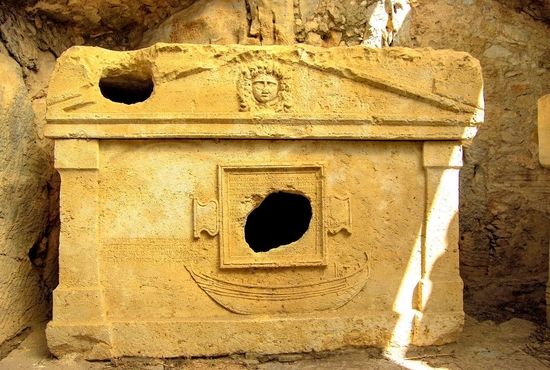 The location of Olympos city ruins in the middle of a dense forest, make it a fairy-tale setting. Following the barely visible pathways leads you to old churches overgrown with climbing bushes, grass, and plants. On the outskirts, abandoned houses, remarkably restored to much of their previous appearance, portray the simplistic lifestyle of the city’s last citizens. A highlight though is the large stone sarcophagus of Captain Euromos. History says he was a sailing captain but other than that, nothing is known about him and why his sarcophagus is there.

The burning flames of Chimaera are a scientific wonder. Natural gases ooze out of the rocks 24 hours a day, providing a beacon in history for sailors who didn’t want to steer near the rocks and end up shipwrecked. Best seen at night time, the strenuous walk up the mountain is not for the faint-hearted, and a torch is needed, but the reward when you get to the top is to toast marshmallows on the flames and enjoy the mystical vibes.