Naturally, being a large land size of more than 783,000 kilometers, Turkey has plenty of cities scattered from the east to the west. As well as the modern metropolis like Ankara or the central tourism hub of Istanbul, hundreds of ancient cities dot the landscapes and thanks to detailed excavation projects, most are popular tourist attractions.

Sadly, others have just quietly faded away into the background, barely mentioned in travel guidebooks or magazines. One such example is the UNESCO World Heritage site of Hattusa in the central Anatolian region between Cappadocia and the Black Sea that was home to the Hittite Empire. As a former ruling capital, uncovered artifacts and structural architecture have given historians great insights into this ancient civilization.

Who were the Hittites?

The Hittites are probably the least understood civilization of all time. Due to their eventual assimilation into other cultures, historians had to deduce everything they know from artifacts left behind. They do know that the Hittites first arrived in the central Anatolian region around 2200BC. By studying ancient texts, and tablets, by the 1930s, experts deciphered their language that also revealed many clues about their lifestyle and beliefs.

When they arrived in the central Anatolian region of Turkey, they lived side by side with the Hattians and Hurrians. Their expansion and growth enabled them to become a fully established empire by 1500BC and Hattusa was the administrative center and new capital.

They gloriously conquered other lands but were notorious for their tolerance of other cultures and beliefs, allowing newly absorbed civilizations to carry on practicing their traditions. Unfortunately, during the reign of Hattusili the 3rd, their religion changed to that of the Hurrians and it became a political tool, therefore, weakening the empire through divided beliefs.

By 1190 BC, the great Hittite empire was in meltdown. Regions had revolted, and the royal palace lacked order and respect. Seven years later, the sea people invaded Hattusa and burnt it to the ground, effectively decimating the capital-ruling center.

Exploring Hattusa: The Ruling Capital city of the Hittites

Sitting a short distance east of Ankara, the capital of Turkey, the ruins are spread out over a vast plateau, and the sightseeing path covers 4 kilometers, so unless you are a keen walker, a car is essential to explore the excavated structures and landmarks. Excavations in the the city that was discovered in 1894, have been haphazard over the last century, mainly due to lack of funding, and 2 world wars. So even though information signs appear in many places, we advise buying a book from the entrance or going on a guided tour to tap into the knowledge of an experienced guide who knows all about the ancient city.

The first notable landmark that is visible is the old city walls. Expert historians replicated a section to as much of its original appearance as possible, and this gives a good idea of the defense methods used to protect Hattusa and its citizens. They give way to the lower city area that was the location of the Grand Temple and houses. The temple was the most elaborate structure of the lower city but even more impressive is the green stone within it. Historians and experts have been unable to establish why it was there but with its smooth cube like appearance and unusual gem color, maybe the Hittites thought it had mystical powers and used it much like a talisman. Leaving the lower part of the city and moving uphill, the impressive Lion Gate comes into view. 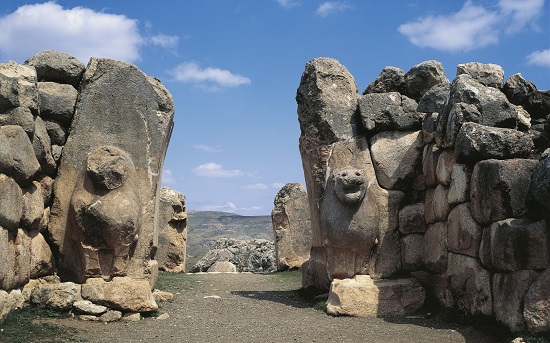 The Lion Gate of Hattusa

Set between two gates without an archway, and named so because of the lions flanking either side, this gate is one of the iconic landmarks of present day Hattusa. Unfortunately, the left-hand side lion is the result of a botched replication attempt, but despite its name, the lions are not the focal point here. The walls attached to the gate displays the Hittites perfect building methods. Large stones had steel rods installed between them and were also ground down to match each other perfectly. The result is a compact defense structure that not even a piece of paper could pass through. Guards sealed the gate at night-time and in the morning, checked the seal again. If it was intact, all was well however if it was broken, they knew someone had penetrated the city.

The other gate receiving much attention is the Sphinx standing at the highest point of Hattusa. The Hittites had a close relationship with the Egyptians possibly explaining the symbolic reference, but historians have deduced that whereas in Egypt, sphinxes relate to the male form, in Hattusa, the statues depicted female form. Possibly used for ceremonial purposes only, the sphinxes standing there today are replicas, and the originals are in the nearby Bogazkale museum.

The well-preserved King's Gate with its missing arch resembles the Lion Gate apart from the relief on the left-hand side that has baffled historians for years. They originally thought it was a king, hence the name but then a theory suggested the relief had female features and they wondered if it was Amazon she-warrior. They finally agreed that it is a depiction of a god said to protect those as they entered and left the city. 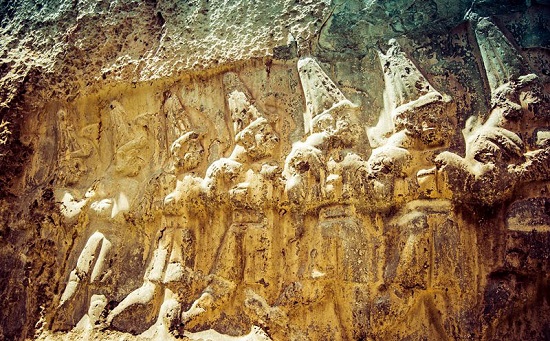 Many other structures sit within the main boundary walls of Hattusa, but it is also worth taking a short drive to visit Yazilikaya also known as the home of the 12 gods of the underworld. Various depictions of Hittite gods and goddesses feature on the faces of the rock sanctuary, but the one that has everyone talking is in an enclave. It is of 12 males in a line wearing conical hats on top of distinctive curly hair.

Travel Tip: After exploring Hattusa, head to Bogazkale museum to see many Hittite artifacts uncovered during excavations. If time allows, also travel to the Corum Museum. Likewise holding many artifacts, it is a great insight into the Hittite beliefs, military system, political structure, housing, art, traditions, and economic success.