Towards the end of the summer touristic season in Turkey, thousands of families and factories gear up themselves up for the olive picking harvest. With more than 1,750,000 tonnes grown every year, Turkey is the fourth biggest producer in the world of olives, a staple ingredient in most kitchens.

Whether added to the simple Turkish breakfast, used in salads, bread, and appetizers or made into oil for cooking, the olive will always feature strongly in Turkish culture because there is not and will never be an alternative. Even in Ottoman cuisine, black and green olives were an essential ingredient in many dishes. Traditionally, they are either soaked in brine over a length of time to soften their skins or pressed into high-quality olive oil, but certain regions are more famous than others for their exceedingly delicious olives.

At the last estimation, roughly, 85 million olive trees thrive under the Turkish sun, of which many sit on the west coast, otherwise known as the Aegean region. Nationwide, Ayvalik, a seaside town facing the Greek island of Lesbos has a high reputation stemming from their love of production that leads to top quality olives. Turks do not just choose Ayvalik olives for their taste though but also because they can produce high-quality extra virgin oil from them.

With just the right weather climate and soil productions, olive trees typically reach their peak production at roughly 8 years, but experts say that with ideal conditions, the tree can last for hundreds of years and produce many harvests. However families who have grown olives in this region for thousands of years respect the slow growing process and employ season workers who use the traditional method of picking them by hand rather than modern day machinery to prevent bruising.

Worldwide, approximately 700 types of olives exist, with Turkey growing roughly 50 variations of them. As well as the already mentioned Ayvalik olive, the most common varieties include Edremit, a favorite type used for oil and grown in Akhisar as well.

Domat is a standard green olive generally picked before ripening to be used as table olives, while the black Gemlik, olive, commonly served at breakfast is sometimes called a tirilye olive, and extremely high in oil content., The Turkish olive producing company of Marmarabirlik exports a lot of gemlike olives. Lastly, Izmir Sofralik, often incorporated into mezes or salads has low oil content while either black ripened or green unripened variations of memeli are also quite popular. 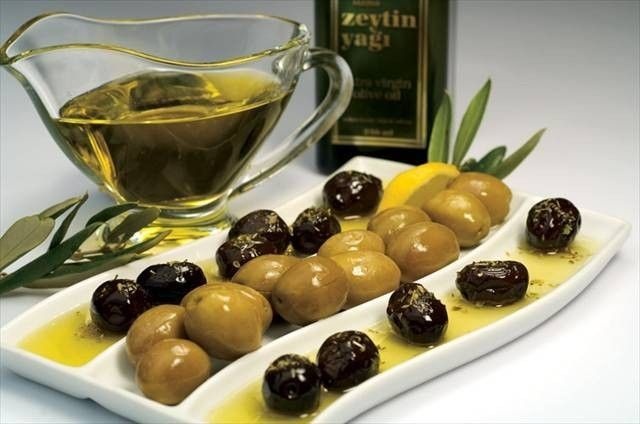 Although the weather and soil conditions have made Turkey, the perfect country for olive growth, a major reason for Turkish society embracing it as a key ingredient is its numerous health benefits. Turks, especially pious Muslims place great emphasis on looking after the body and olives have many attributes that help this. As a stone fruit high in vitamin E, it acts as an anti-oxidant for our immune system, skin, and eyes. It also helps widen blood vessels and encourages cells to interact peacefully with each other for the greater good of the body. This explains why olives are an essential part of an Aegean and Mediterranean diet that is the healthiest combination of food to eat in the world.

As a nation, Turks have always been incredibly resourceful. The small olive is widely eaten for breakfast or in appetizers dishes, and olive oil is a focal ingredient of the cooking process and as a salad dressing. However, Turks have really stretched themselves to the limit when it comes to making good use of this natural ingredient.

Handmade olive oil soaps are not only an attractive souvenir but also widely utilized in the Turkish bath culture. People with skin conditions or eco-friendly enthusiasts who prefer to avoid manmade chemicals so often seen in beauty products particularly favour these handmade soaps. Although the original recipe existed since the Babylon times, Arabs replaced the ingredient of animal fat with olive oil and natural scents, so we see their version as it is today.

While not synthetically pleasing to the eye, the rustic appearance of real handmade olive oil soap lends weight to its authenticity. The south-eastern region of Gaziantep enthusiastically uses and produces olive oil soap, mainly to deal with skin problems such as eczema and sunburn.

The most quirky and surprising fact about how Turks use olives is the annual olive oil wrestling. Known as Yagli Gures, the sport traces its roots back more than 600 years supposedly to the elite soldiers of the Ottoman Empire. While training for combat, they used olive oil to keep cool and ward off mosquitos and over the years, it established itself into a fully-fledged sport.

Kirkpinar in the Edirne region holds the crown as the oil-wrestling destination of Turkey and every year, muscley wrestlers dose themselves in a combination of olive oil and water before fighting their opponent to the ground. Wearing traditional leather trousers probably does not help maintain a grip of a wrestler covered in olive oil so the aim is to put your opponent belly up or make him immobile by grabbing a firm hold on his leather pants.

If you like reading about food, the following articles will appeal to you…

Famous Nuts of Turkey: Every day in Turkey, nuts are eaten in abundance, with tea, alcohol or even on their own as an enjoyable pastime. Turkey is one of the biggest exporters of nuts in the world and this article pays homage to the simple snack.

Turkish Soups: Everyone should try homemade soup in Turkey because it is a delicious meal for vegetarians and those on a budget. This article looks at the soup culture of the country and variations to try.