BLOG Is Turkey a Fun Place to Visit?

Is Turkey a Fun Place to Visit?

So, you want to know whether Turkey is a fun place to visit. Our answer is yes because as well as being fun for holidays, many foreigners buy property either for holidays or to live here all year round. Does that not speak testament to its popularity? Given our business presence in Turkey, you might suspect we are biased. But yearly tourist stats say it all. Annually roughly 40 to 50 million people visit Turkey from Russia, Germany, China, the Middle East, Europe, and Asia.

All, from families to couples to groups of friends and solo travellers, have fun and leave with lasting memories of Turkey's unique diversity. Most people fall in love with Turkey during the first 24 hours, because the country offers much to anyone who visits. However, certain places and things to do in Turkey make it stand out globally for travel. Let us look at fun suggestions for your visit to Turkey.

Why Turkey is a Fun Place to Visit

Even if you are not interested in city breaks in Turkey, Istanbul is unique. The Byzantine and Ottoman empires ruled their lands from Istanbul city. Those empires changed history and impacted world events. Retracing their footsteps through Istanbul, Turkey's best city, reveals an eye-opening journey into different historical timelines and culture. First, head to Sultanahmet in Istanbul's Europe side to see the Ottoman and Byzantine architecture of famous buildings like the Hagia Sophia, Blue Mosque, the Ottoman Topkapi palace, and underground Basilica Cistern. Otherwise, for shopping and nightlife experiences, head to new Istanbul for walking tours around on and around the back streets of Istiklal Avenue. Other fun things to do in Istanbul include Bosphorus cruises, visiting the incredible Grand Bazaar, traditional Turkish restaurants, and day trip ferry rides to Asian Turkey's Prince's Islands. Read about things to do in Istanbul – Turkey. 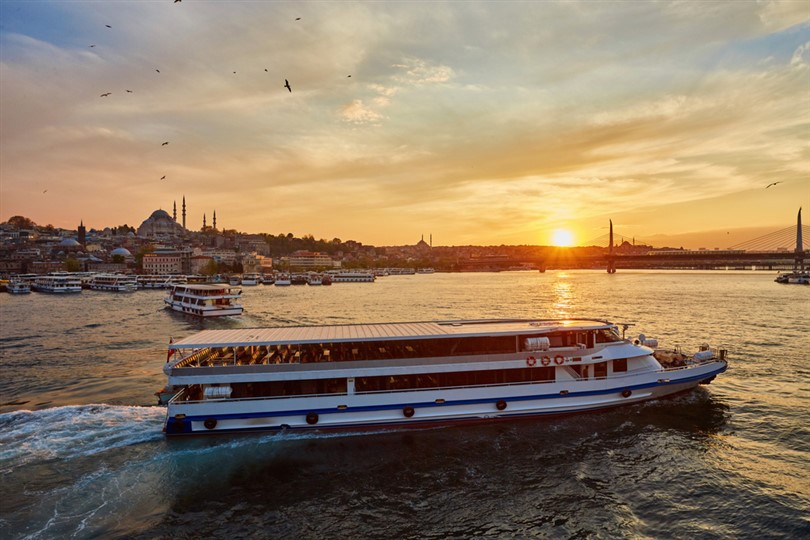 2: An Adventure in Beautiful Cappadocia

Many people, after visiting Istanbul, put Cappadocia in central Anatolian Turkey on their list of outside places to go. The reasons why are clear to see. Cappadocia's magical landscape is quite unlike anywhere else in Turkey. Formed by thousands of years of wind erosion, weird shape rock formations called fairy chimneys dot vast landscapes. The first place to visit in Cappadocia is the UNESCO Goreme Open-air Museum, boasting of ancient 14th and 15th-century cave churches and monasteries. Yes, Cappadocia was one of the first places in the world to embrace early Christianity. Also, wake up early for spectacular hot air balloon trips over the valleys at sunrise. In the afternoon, visit underground cities that citizens used to protect themselves against invading armies. For authenticity in Cappadocia, book your stay in a traditional cave hotel. 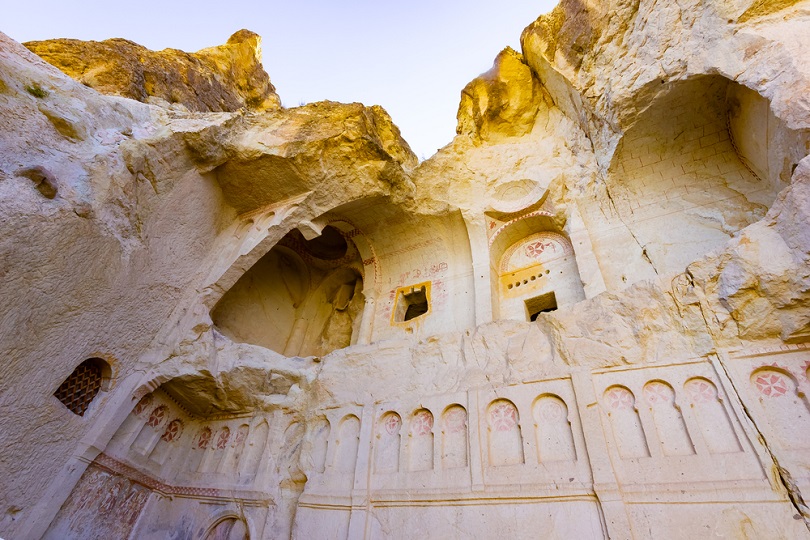 Meanwhile, over in Aegean Turkey, the ancient city ruins of Ephesus host millions of visitors every year. This city that nearly rivalled Rome in importance has been carefully excavated to restore landmark buildings to their former glory. Visit the Roman terrace houses to see how they lived, then head to the agora marketplace to see their Roman temples and where they shopped. The nearby Celsus library once held an extensive collection of ancient scrolls, and the grand theatre, was where the Bible's Roman Artemis riots took place. Ephesus was one of the seven churches of revelation, and Saint John and the Virgin Mary spent time in the city, making it the best place to visit for Christians while in Turkey. Nearby the temple of Artemis was also one of the ancient world's seven wonders. 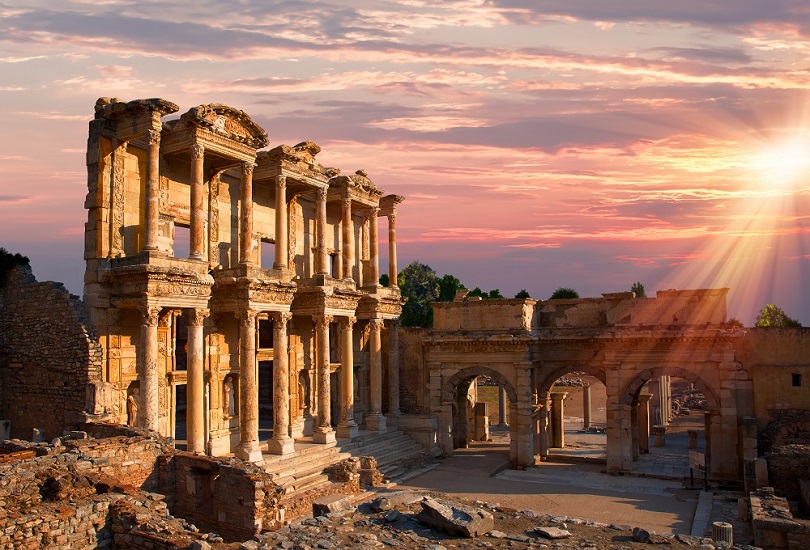 Cappadocia is one of Turkey’s beautiful landscapes but wait until you see Pamukkale. Aptly named Cotton castle because white calcium pools tumbling down a hillside reflect just that; this marvel of Mother Nature is hard to believe until you see Pamukkale with your own eyes. Formed by solidified calcium water, some of Pamukkale's pools are open for paddling in. Otherwise, also pay the extra entrance fee to Cleopatra's pool to swim over sunken columns from Hierapolis ancient ruined city. The nearby Pamukkale museum is also fun to visit. Both UNESCO World heritage sites host millions of visitors to Turkey every year and often compete with Ephesus for the title of Turkey's top visited tourist attraction. 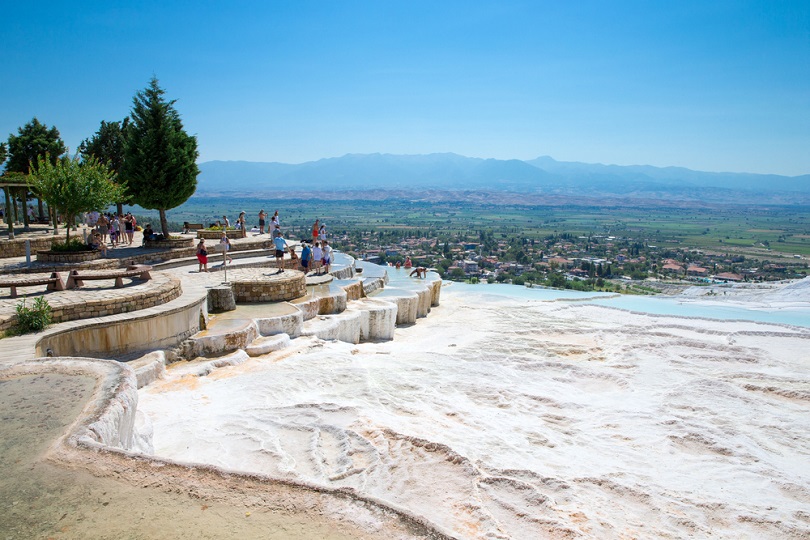 5: Explore the Fethiye Region of Turkey

In case you did not guess, places of natural beauty are core themes in our Turkish travel experiences, and Fethiye adds even more landscapes to the mix. The best thing to do is catch the water taxi from Oludeniz beach to Butterfly Valley, a canyon fronted by a single beach. The Turkish people looking after the valley, bar and restaurant believe in being at one with nature. Also, see the Saklikent gorge, formed by an earthquake thousands of years ago. Otherwise, the Blue Lagoon area is one of Turkey's top visited attractions and often appears in international travel magazines. About things to do in Fethiye – Turkey.

Sitting east of the Fethiye region is Antalya, comprising a city centre and smaller surrounding coastal resorts. Antalya excels in everything, including five-star hotels and adventure sports. The Belek district is Turkey's golfing capital, having hosted well-known golfing celebrities on state-of-the-art courses. However, the best jewel in the Turkish crown is the gorgeous sandy beaches. Trip advisors voted four of Turkey's top ten beaches as being the best on the Mediterranean Antalya coast. They are Cleopatras, Konyaalti, Lara and Kaputas. Fun places to visit in Antalya include the historical ruins of Side, Mount Tahtali cable car, Olympos ancient ruins and the burning flames of Chimaera.

Often called Turkey's competition to Saint Tropez, the Bodrum peninsula is the Turkish destination for the world's rich and famous. Think mega yachts docking into Yalikavak town, five-star rooftop dining in Torba, and brand name boutiques with price tags equivalent to a month's wages for most of us. The peninsula has, for many decades, also been the ground for artisan inspiration. However, should you want budget travel in Turkey, places like Gumbet town deliver precisely what you are looking for. Bodrum is all about fun, fun and more fun, as seen in the pursuit of leisure and pleasure; hence sailing is big business and is the nightlife. Bodrum Castle is the region's top landmark, housing the Underwater Archaeology Museum. 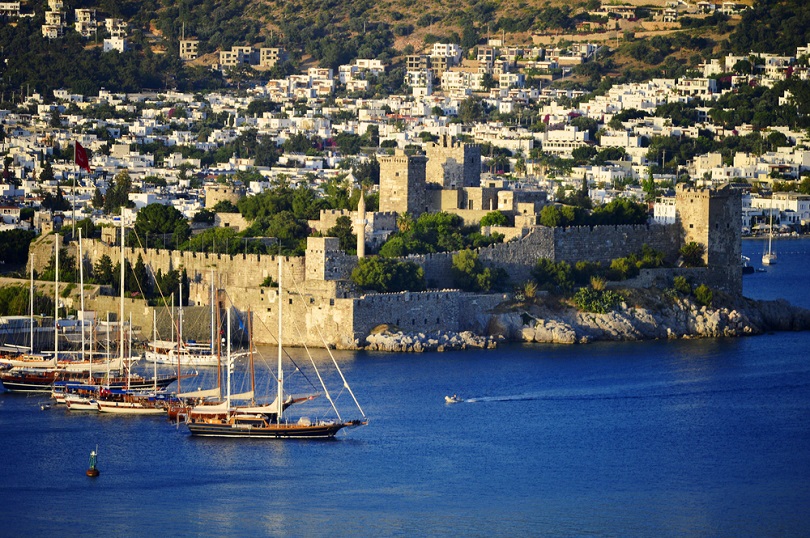 Turkey provides many tourist choices, from places to visit to themed travel holidays. Of which the Turkish riviera steps forward. Think sun, seafood, and nautical themes, for the best days at sea. Comprising major sailing destinations of Turkey like Bodrum, Marmaris, Fethiye and Antalya, and smaller towns and villages, the riviera allows you to visit the places mentioned above in one go. Another theme of the Turkish Riviera is the Blue Voyage tours to visit historical sites and attractions and beaches and islands. The ability to accommodate budget and luxury holidaymakers is probably the biggest reason for the Turkish Riviera travel success.

On the sunny Mediterranean coast of Turkey, 540-kilometres of coastline from metropolitan Antalya to gorgeous Fethiye forms the famous long-distance Lycian way. Ranked highly among other favourite walks of Turkey and comprising historical ruins, beaches, and rustic destinations, international novice and experienced trekkers flock. Named after the Lycian Empire that existed in history around the 8th century BC, old historic ruins, and rock tombs left behind by them, are just one of many attributes of the Lycian Way.

Turkey's best winter ski resorts range from the Black Sea region to the Mediterranean coast, and there is something for every adrenalin seeker. Snowy Turkey made concerted efforts to remain the best in winter sports, ensuring that every type of thrill is available. As a result, Turkey is a great winter destination.

Turkey's Lake District of Turkey attracts those who love the great outdoors. Egirdir town centre is a perfect place to stay and an excellent base for hiking, climbing, and exploring regional sights. Of course, the area welcomes those who want to see a different side of Turkey, away from beaches and coastal regions, but more importantly, it is one part of Turkey that welcomes visitors all year round. Hosting two of Turkey's most fantastic ski resorts, hiking trails, and natural wildlife, the Turkish Lake District is unique.

Although most people think of cities, when hearing about Trabzon, the name includes the larger district and smaller villages of the Kackar mountain range. Boasting some of Turkey's most beautiful landscapes and often compared to Switzerland's green hills, plateau culture is an integral part of summer life when locals retreat to beautiful places like Uzungol lake. Surrounded by green hills, this top place of natural beauty provides the perfect weekend or 2-day getaway.

Turkey's UNESCO World Heritage Sites blend cultural and natural beauty to highlight the best of the country's history. The UNESCO list includes buildings, cities, complexes, islands, monuments, and mountains. All UNESCO Heritage sites are open to the public, so tour them independently or buy round-the-country tours to see them all in one trip. However, don't expect whirlwind visits because they sit all over Turkey from east to west. You have already seen four by visiting Ottoman Istanbul, Ephesus, Pamukkale, and Cappadocia mentioned above.

So, Turkey is a fun place to visit, from beautiful Cappadocia, to majestic Ephesus, to museums and mosques in Istanbul. Enjoy gorgeous beaches, walk cobbled paths of time, shop to your delight and swim in the Aegean and Med Sea. From the old Ottoman palaces to Roman ruins to balloon trips in Cappadocia, the vast activities ensure everyone has fun. For more suggestions on what to do for fun, please read our blog about Turkey, which talks about the food, culture, destinations, traditions, and more.