BLOG Izmir City Guide: To Travel and Live in Turkey

Whether you plan to travel or live here, this Izmir city guide serves as a great introduction to Turkey’s third-largest city. Sitting on the western Aegean coast, for many decades, its western, relaxed ambience wows both Turks and foreigners. Indeed, many first-time visitors to Turkey, aware that it is a Muslim country often express surprise at the non-conservative atmosphere that wholly encourages individuality, expression, and creativity.

Non-conformity shines through on every corner, and the pursuit of leisure is highly encouraged, whether socialising with friends, exploring tourist attractions, or pursuing hobbies. So, in this guide, we give the basics of what to know and how to enhance your time in the city. We will also briefly look at whether it is suitable for expats looking to relocate and live in Turkey all year round.

How to Get Here

Izmir is blessed with an impressive transport network of all forms, including road, sea, and air. For those coming in by sea, the city and nearby Cesme are both official ports of entry. Otherwise, the Adnan Menderes airport operates all year round with frequent flights from many countries. To reach the city centre from here is either 30 minutes by car, or 1 hour via bus transfer. To arrive via bus, buy a ticket to the otogar (central bus station) in the Bornova district. Otherwise, all major highways in western Turkey make getting here easy and accessible. 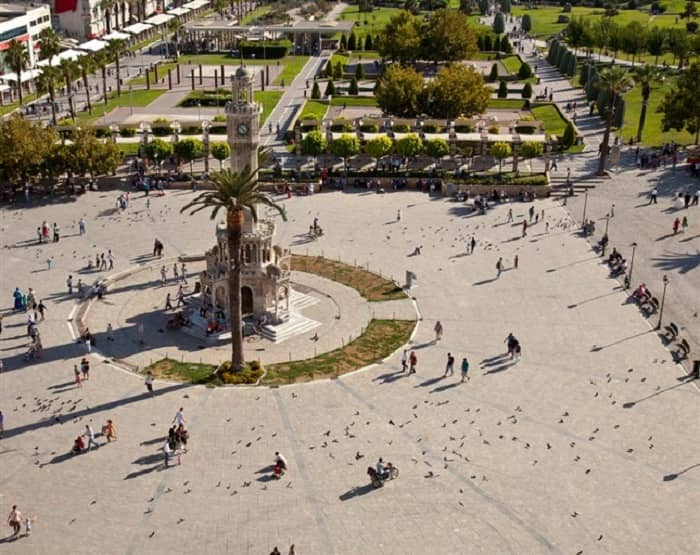 Year-round temperatures range from 30 to 90 degrees Fahrenheit. Those who want the beach, pool, sun, sea, and sand should visit between June to September, while those who like trekking and exploring historical sites would do better with cooler temperatures from March to June and October to November. January to February, the coldest months also experience heavy rainfall, so locals consider this downtime.

Choices of places to stay are endless but ideally, opt for hotels or self-catering apartments in Konak, the centre, and where most attractions, bars and restaurants are. The Alsancak and Karsiyaka districts are also suitable alternatives because both are hubs of activity and have easy transport links to Konak.

Getting around is easy, but if exploring the coastal neighbourhoods, our favourite method is ferries running from Goztepe, Pasaport, Bayrakli, Karsiyaka, Bostanli, Alsancak, Konak, and Uckuyular. Check izdeniz.com for their schedules and ticket prices. If travelling between neighbourhoods, use the local dolmus system. These small buses seat roughly 20 people but use the bigger ones running from the central otogar bus station to get to destinations further afield.

Affordable and cheap taxis wait for customers on most corners in busy neighbourhoods; otherwise, your hotel will call one to the reception. By law, they must use meters, but for short distances within a particular area, they may also charge a set fee. Otherwise, the city council also runs a bike hire service called Bisim. The stations located at specific points along the seaside take credit cards or the Izmir Kart transpiration card.

When it comes to food, be prepared to taste the best of Aegean cuisine. A central focal point at night and weekends is seaside restaurants, especially in the Kordon area that serve up a delightful menu of fresh fish and seafood, and meze appetisers. Otherwise, whether it is Indian, Chinese, steak, or pasta that you want, a multitude of restaurants will satisfy your palette, but also delve into Turkey’s varied cuisine and regional dishes. Traditional Turkish cuisine is served in lokantas. These simple restaurants display the menu in Bay Marie dishes, choose what you want and take it to your table.

Don’t ignore street food options either because these filling and tasty snacks help budget travellers save money. The Kumru sandwich served with cheese, sucuk, and tomato is the most popular, whereas Boyoz, the Turkish pastry, is often eaten for breakfast. Izmir kofte is a delightful blend of meatballs, potatoes and peppers topped with garnish parsley. Cop sis, small cubes of lamb, is more of an Aegean classic but just as filling for a lunchtime snack.

Start with taking an admiring look around Konak square, the heart of Izmir city. Traditions say to have your photo taken beside the clock tower, built-in 1900, that is the city’s principal landmark and mascot. After head to nearby Kemeralti, the oldest bazaar brimming with narrow streets and alleyways. Vendors here sell souvenirs and it is a great place to mingle with locals and practise your Turkish bartering skills. Dating from the 16th century, it overflows with exciting shops including antiques and Turkish carpets.

Nearby the Agora is Izmir’s oldest historical site. An earthquake destroyed the original 4th century BC version, but Roman emperor Marcus Aurelias rebuilt the version we see today. A great place to end your day is Asansor; a lift initially intended to make access from one street to a higher one easier, although these days, many visit for the rooftop restaurant for a fantastic city centre view. Another place for camera-worthy views is Kadifekale. The name translates in velvet castle and its where the martyrdom of Saint Polycarp took place.

Although the city centre is a great place to stay, eat out and explore, we also recommend getting out to the rest of the province with the same name. This is a chance to combine an urban landscape with beaches, water sports and further insight into the area’s cultural history. Notable places to include…. 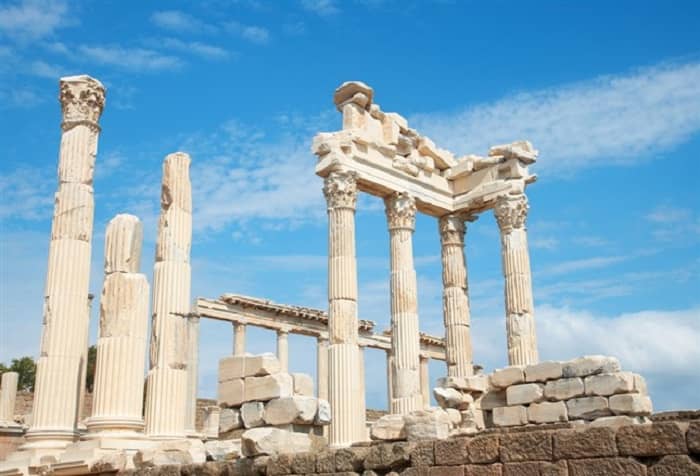 Bergama: The traditional village still features many 18th-century houses and in some cases, a mixture of Ottoman and Greek architecture, reflecting the region's history when it was known as Smyrna. Culinary delights to try include the local meatballs and Tulum cheese but the primary reason to visit is Pergamon ruins. The ancient city was once a world leader, and they invented parchment paper and opened the first mental hospital. The steep theatre, the most photographed landmark, is a must-see.

Cesme and Alacati: Sitting side by side, these two resorts come to life in summer, especially for Turkish retirees, and these days, many foreigners also buy property there. Strolling the quaint, cobbled streets easily explains why as traditional whitewash stone cottages with blue shutters appear. The New York Times named it a top place to visit in the world, and it is a windsurfing mecca attracting fans from all around the world. If beaches attract your attention, head to Cark, Boyalik, or Diamond for the best stretches of sand. 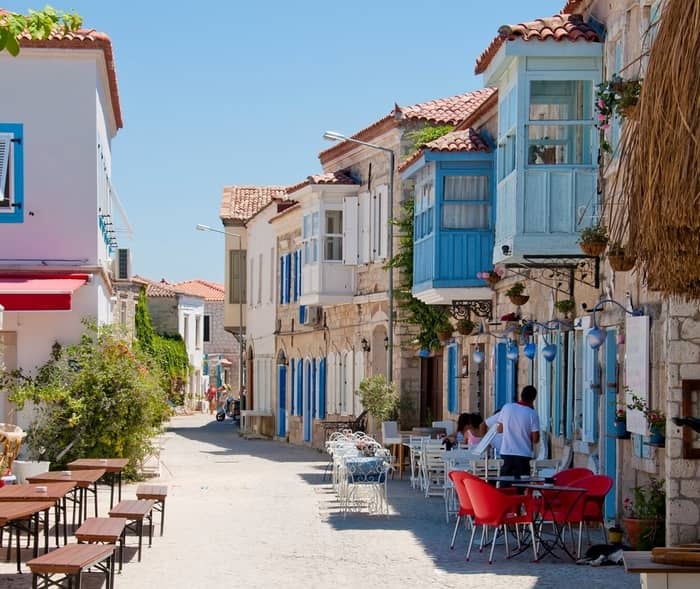 Dikili: On the northern outskirts, Dikili is another favourite for Turkish holidaymakers, who want to rest and relax, although few foreigners venture there. Indulge in hot springs and 40 kilometres of sandy beaches. Outdoor fans also love Dikili thanks to its places of natural beauty like the Spruce forest, Botanical gardens and Karagol Lake.

Foca: As another resort where many Turks buy summer homes, Foca separates into the new and old parts. The old is your typical Aegean scene with small fishing boats docked in the harbour and bougainvillaea lined stone cottages. Sites of interest include the castle, and daily boat trips stop off at several surrounding islands, where the famous Mediterranean monk seal sometimes makes an appearance.

Seferihisar: This small village stands out because it belongs to the “Cittaslow” movement that aims to prevent fast food and movement culture. Residents adhere to buying locally sourced ingredients and 50 other principles to preserve traditions, support local businesses, promote regional recipes, and protect the environment. It was the first village in Turkey to do this and joined a network across the world.

Selcuk: Sitting on the outskirts of the province, stay overnight here because there is so much to do. Start with the ancient ruins of Ephesus, one of Turkey’s top visited attractions, then head into the Selcuk mountains to see the Virgin Mary’s house and Sirince winemaking village. Other interests include the stone aqueduct, Saint John’s basilica and the Artemis temple, one of the ancient world’s seven wonders. (More about Selcuk and what to see and do.)

This Izmir city guide is for first-time visitors. Still, as the region’s popularity grows, more people look to relocate there, either for a retirement destination or somewhere to live and work. Indeed, the large expat community thrives, and even Turks, fed up with Istanbul’s hustle and bustle move here. If you are one of those people, this article on why people choose Izmir as somewhere to live will be of use.

About Us: We are Turkey Homes, a property and investment specialist who has helped hundreds of foreigners and Turks buy their dream home. With offices all around the country, our local knowledge is second to none. Call us today, to chat with a local agent about investing in Izmir.