When you consider Istanbul as a popular tourist destination, you immediately think of the dominating Blue Mosque and the stunning Hagia Sofia which are like the grandparents of the historic centre of Istanbul on the European side of the Bosphorus river. For those who visit this great city which has such an incredible amount to offer, the Asian shores become but a backdrop to the standard long weekend in Istanbul. But Istanbul really is a tale of two cities and the Asian side of the mighty Bosphorus should not be underestimated. Since the two sides were connected by the Bosphorus Bridge in 1973 and later the Fatih Sultan Mehmet Bridge in 1988, the Asian side has seen rapid urban development and is now home to over a third of the city’s population. Property investors are onto a winner if buying in one of the popular Asian neighbourhoods as real estate is hugely sought after and tourism in the area is on the rise.

The Asian side of Istanbul may be more renowned for its residential status than as a stop on the tourist trail, but the more relaxed pace of life there, compared to the frenzy of the European and historical half of the city, is an attraction in itself. Residents of the popular areas of Kadıköy and Üsküdar are mostly business commuters and with an ever improving infrastructure, the business district of Istanbul on the European side is more easily reachable than ever. Foreign investors looking for long term rental opportunities should take heed in the potential here, with a newly planned metro line intended to link the two sides of the Bosphorus, the Marmaray under Bosphorus rail link which opened in 2013 travels from Europe to Asia in just 7 minutes and new bridges and underwater tunnels being added rapidly. This could also be a huge advantage for anybody looking to buy a second home in Istanbul away from the craziness and expense of the European side.

That said, tourism is also on the rise on the Asian side of Istanbul, with many hidden gems tucked away. While many tourists stick to the historical European side, it cannot be forgotten that the Asian side is served by Sabiha Gökçen International Airport, the cheaper option for airlines travelling to Istanbul. As the hub for Pegasus Airlines and a base for Turkish Airlines alongside many European and Arab budget airlines, the Asian side of Istanbul should be the first port of call for incoming visitors. With its better planned living spaces and more access to green areas and coastlines, these charming residential neighbourhoods are fast attracting tourists and holiday let opportunities should not go unconsidered, especially with so many reliable travel links to the other side of the river. Top neighbourhoods Kadıköy and Üsküdar are also connected to Eminönü, Karaköy and Beşiktaş on the European side by ferry.

Kadıköy and Üsküdar form the historical cores of the Asian side of Istanbul. Both were once independent cities in their own right before they were swallowed up by the ever growing might of Istanbul in the late 19th century. Both are lively places with a large student population alongside the city workers and expats. Kadıköy is a hub of entertainment and eateries, its narrow streets filled with cafés, bars and restaurants, but with a more working class and local feel than the nightlife hotspots of the European side such as Beyoğlu and Nişantaşı. Kadıköy has some lovely coastal areas away from the centre, where things become a little more upmarket, in neighbourhoods such as Moda and Fenerbahçe. The inland areas such as Kozyatağı and İçerenköy are more expensive and house many of Istanbul’s upper-middle class residents, many of the houses in a traditional Ottoman style. If you are seeking apartments for sale in Istanbul Asian side, these are the prime districts.

The district of Üsküdar is one of Istanbul’s oldest-established residential areas and has a busy waterfront and many sprawling neighbourhoods. Salacak, Üsküdar’s long prominade along the coast is popular for its excellent views of the European shore which clearly show Topkapı Palace, Hagia Sofia and the Blue Mosque. The promenade is lined with cafes and restaurants, the most famous of which is out on the water, the Maiden’s Tower, now an upscale restaurant and venue for wedding parties. Classic Ottoman wooden houses can be found in the streets of Salacak behind the coast and it is also the landing point of the legendary 17th century Hazerfen Ahmet Çelebi, the first man to fly. 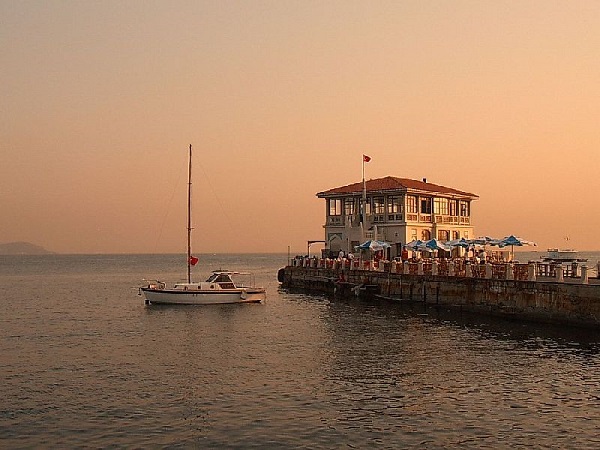 One of the best things to do in Kadıköy is to ride the heritage tram which travels in a circle starting at the station behind the pier. The tram passes through the neighbourhoods of Altiyol, Bahariye, Moda and Muhurdar before returning to its starting point. It is a fantastic way to see the area, passing by the main port and shopping street before squeezing its way through the narrow residential backstreets with their colourful wooden-clad houses. While in Kadıköy, you may even be tempted to ride the fixed position hot air balloon, easily recognisable by its yellow colour. It may not travel very far, but the ride does offer fantastic views of the city. For an impressive market experience, Kadıköy’s 40,000 square foot Tuesday market is something to behold and a foodie’s heaven with stalls selling everything from fish and fruits to baked goods and baklava. 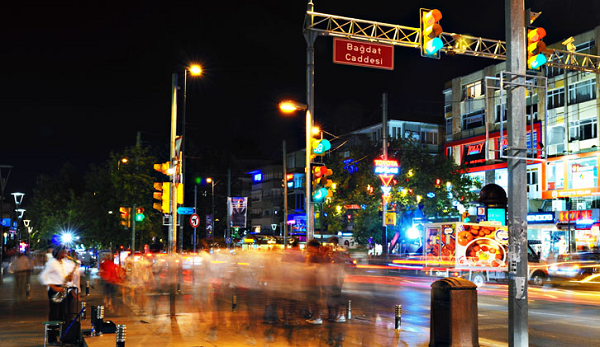 Bağdat Caddesi (Baghdad Avenue) is considered to be one of the most European flavoured streets of Istanbul, with its roadside cafés and high-end restaurants shaded by trees and wistfully scattered among fantastic shopping outlets. The road lies parallel with the Marmara coast and is named so as it once marked the start of a road that connected Istanbul with Baghdad, another important city of the Ottoman Empire, following the recapture of the city by Sultan Murad IV. Today, it is incredibly fashionable, with department stores, fashion stores of world famous brands, restaurants of local and international cuisine and luxury car dealers. It is also considered to be the celebration centre of the Asian side, just as Taksim is to the European side. 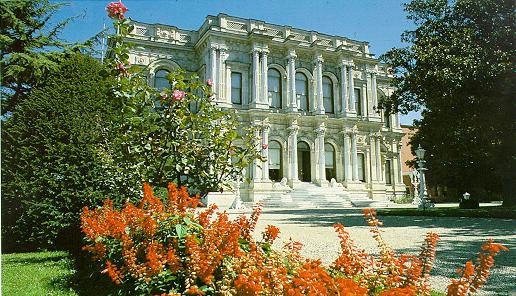 Beylerbeyi Palace, designed by infamous architect Sarkis Baylan between 1861 and 1865, comissioned by Sultan Abdulaziz lies under the legs of the Bosphorus Bridge. Set amongst an attractive garden, the palace has a French neo-baroque style to it while retaining some of the traditional Ottoman traits in the selamık (men’s quarters) and the harem (women’s and family quarters). It also lays claim to the bathroom with the most beautiful view in the world. Situated on the second floor, the bathroom has a large window with a full view of the Bosphorus. It was also the former residence of the Sultans. It is perhaps smaller and less elaborate than other famous Istanbul palaces like Dolmabahçe and Çırağan, but it is certainly worth a visit. 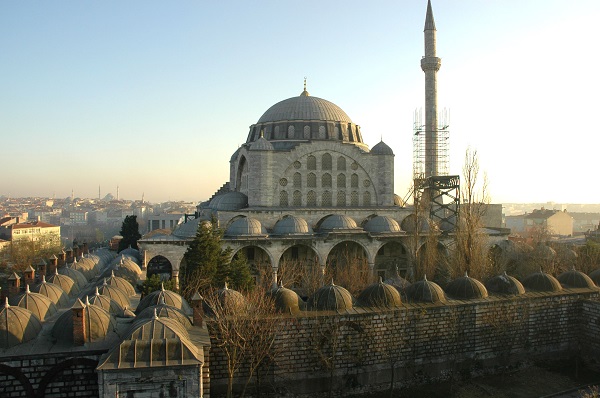 The Asian Mihrimah Sultan Mosque, not to be confused with the European version of the same name, also known as İskele Camii (Mosque of the Pier) due to its location next to the Üsküdar ferry terminal, is one of the most impressive mosques in Istanbul. The mosque was designed by Mimar Sinan and was commissioned by Mihrimah Sultan, daughter of Süleyman the Magnificent. The mosque’s twin minarets are instantly recognisable as part of the Üsküdar skyline. It was recently restored and is attracting a high number of visitors. The freestanding fountain at the front of the mosque which now serves as a traffic island is also a good attraction, built by Sultan Ahmet II in 1726.

Moda, a neighbourhood occupying the peninsula just south of Kadıköy, is an old, quiet but cosmopolitan part of Istanbul. Slightly run down, sadly with some of the many historic houses of the area being demolished and replaced with modern apartment buildings, Moda is still considered to be one of the more pleasant residential districts in the city. Some neo-classical architecture can still be found and there are some lovely parks on the sides of the peninsula which are perfect for an evening stroll and drinks while gazing upon the minaret and dome filled skyline of the historic city on the other side of the Bosphorus. Moda is definitely the bohemian area of the city, with independent record shops, ateliers, small theatres and rare bookstores to explore. Chic geeks are never too far away from one of the comic book stores and if you are looking for an antique deal, Moda is the place to be.

Moda is a neighbourhood for the talented artists of Istanbul, the crafters behind handmade bags and clothes, dolls and jewellery which are sold at the front of their workshops. Young designers and artists with working studios and exhibition spaces are easy to find. Hidden exhibitions can be found in the strangest of places, such as the basement of a publishers like Torna. You could easily spend a few hours walking the streets as a wannabe artisan, sipping tea or homemade lemonade at the charming Pappa Café, devouring delicious pizzas at Pinsa Moda, or tasting and testing truffles and chocolates and Moda’s famous Çikolata Dükkan. Pancakes have become a staple of Turkish cuisine and the best can be found at Muchies Crepe and Pancake in Moda, the place that introduced the pancake and French crepe to Turkey! 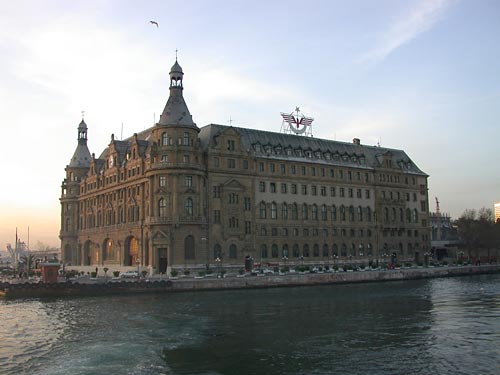 Haydarpaşa Station, built by the Germans in 1908 in a distinctive Teutonic-castle style, no longer a working station since 2013, is one of the Asian sides most popular attractions. Apparently deliberately built with this architectural style in mind because in the age of railways, it was the point at which passengers from deep inland Asia had their first sight of Europe, located across the Bosphorus. The station was once part of the eastern terminus of what was perhaps Europe’s most storied and romantic train line, the Orient Express, which ran from Paris to Istanbul between 1883 and 1977. Today the station is still open to visitors who can stroll through the atmospheric waiting rooms, restaurant and empty platforms. 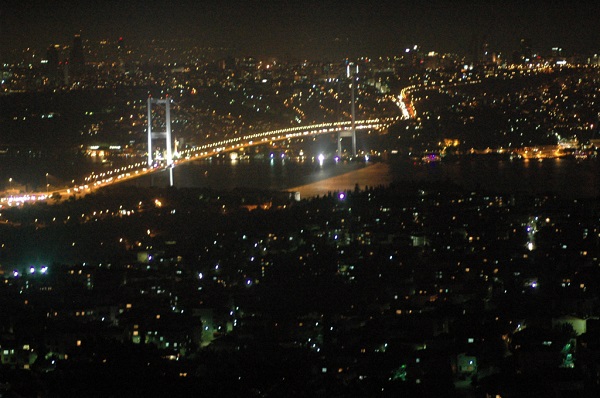 Other little gems on the Asian side of Istanbul include Çamlica Hill, one of the highest points in Istanbul, dominating a great part of the city. On the top of the hill is a public park with cafes that have a distinctly Ottoman atmosphere. The Toy Museum is also a favourite, founded by poet Sunay Akın. Housed in an historical mansion in the Göztepe neighbourhood, just east of Kadıköy, the museum is home to over 2000 toys from around the world, including a French violin from 1817 and an American doll from 1820. The Anadolu Citadel’s interior may not be open to the public, but this medieval building is worth stumbling upon. Rather smaller and older than its European counterpart, the citadel is situated on the meadow where the tranquil Göksu River empties into the Bosphorus, surrounded by traditional wooden houses. If you have the inclination to venture a little further, Içmeler near Tuzla is home to the only hot spring in Istanbul.

The Asian side of Istanbul may be the perfect place to live and certainly a fantastic area to invest in, but its many hidden gems are sorely missed by those who are blinded by the beauties of the historical district. It is time for the Asian shores to shine. Perhaps we all should consider visiting the lesser known Istanbul next time we visit?