BLOG Popular Places to Visit around Alanya in Turkey

Bustling Alanya on the outskirts of the Antalya region has slowly built up a loyal fan base of admiring holidaymakers who return year after year. Investors and expats looking to cash in on the lucrative Turkish property market by investing in a hotspot of the Mediterranean coast, also favour it as an ideal retreat.

Its ability to accommodate all types of tourists and foreign residents, through beaches, shops, hotels, and nightlife establishments efficiently fuels its popularity. However, vast ranges of places to visit in and around Alanya also make it an ideal destination for anyone who likes exploring. Including landmarks of natural beauty, historical sites, and surrounding towns, getting around to attractions and places is a perfect introduction to the cosmopolitan lifestyle of Mediterranean Turkey.

If it is your first visit to Alanya, book a city tour with local travel agencies or explore independently at your own pace over the course of your first day. Start with the 35-meter high Red Tower with magnificent views, standing proudly on the coastline. Once used for executions and as a protective port watching over the nearby dockyards, it is now the top visited landmark of Alanya.

Follow it up with a visit to the Byzantine Castle, an open-air museum of which ancient ruins date from the 13th century. The old landmark, currently on the UNESCO World Heritage Sites tentative list ceased use as a defence port in the 19th century and in an odd development, locals built houses within its boundaries.

Cleopatra’s Beach, the most famous and popular in the area, is also near to Damlatas Cave that takes just half an hour to see. Said to be extremely healthy for people with breathing problems, the natural stalagmites garner much attention and approval from Turkish health experts. Lastly, the Alanya Archaeological Museum holding Roman and Byzantine artefacts receives its claim to fame from the statue of the famous muscular demigod, Hercules, standing within its walls.

This is where it starts getting interesting because regions around Alanya are incredibly picturesque and an excellent example of Turkey’s nature and wildlife. The national, protected Koprulu Park is home to a large, canyon with a fast flowing river gushing through it. Covering 366 kilometres forested with cedar trees, an old landmark Roman bridge receives little attention because people mainly flock for outdoor activities.

Riverside fish restaurants are bases for family picnic days out while walking routes retrace footsteps of the biblical Saint Paul when he trekked through this region. White water rafting by far is the highlighted activity, though. Passengers after receiving their safety equipment and briefing set off with a guide to navigate the 8.5-mile river downstream. It is not for the faint hearted so anyone seeking a slower paced excursion would do well to book a Green Canyon tour instead that is a leisurely 17-kilometer long boat cruise with swimming breaks and lunch served on-board. 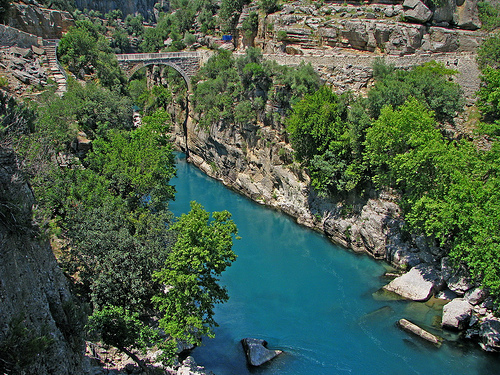 Other Towns, Cities, and Villages to Visit near Alanya

Heading in a westerly direction on the D400 highway, a multitude of towns and villages each with their own vibes and characteristics are worth seeing. Historical Side earned international fame for its Temple of Apollo that once hosted Cleopatra and Marc Anthony on a romantic rendezvous. Ancient ruins of the large Hellenistic theatre situated in the heart of the town also receive many daytime visitors from other regions.

Further, up the coastline, Belek is a golfing mecca while Kemer plays host to the nearby dominant and majestic Mount Tahtali. Every day, passengers ascend in cable cars for a short ride to the viewing platform that gives off a dramatic 360-degree panoramic view of the coastline and backing Taurus mountain range. 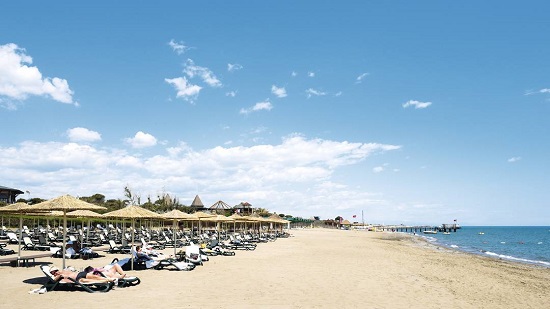 A must visit however is the large city centre of Antalya that is a hub of art, culture, shopping, nightlife and touristic attractions. The old town of Kaleici, famed for its old three doors Hadrian’s Gate is a small network of cobbled streets lined with old Ottoman houses and quaint boutiques. Antalya is also rather proud that it hosts one of the country’s greatest archaeological museums holding numerous priceless artefacts found in the many excavation projects that have taken place in Turkey.

Families with children would do well to visit the newly opened Antalya aquarium that focuses on educating kids about sea marine life in a fun, unique way. Uniquely as well, Antalya city has its own Duden waterfalls landmark that falls dramatically off a rocky cliff into the Mediterranean Sea.

Alternatively, rather than head west to visit the above towns, just 130 kilometres east of Alanya is the relatively unknown town of Anamur. Growing bananas are one attribute that the region has, but more interesting is the coastal Mamure castle that remains mostly intact and would be the perfect location for a medieval war and love film. Sitting on the tentative list of the UNESCO World Heritage sites collection, the Armenian castle with 39 towers and 3 large courtyards is mainly a bucket list destination for repeat visitors to Alanya.

If you want to know more about Alanya, read our area guide focusing on shopping, dining out, partying, and getting around the city. Alternatively, Alanya is part of the Turkish Riviera and this article talks about that, traditional gulet cruises and Blue Voyage cruise routes.