BLOG Splash Around in the Mud Baths of Turkey

The Mud Baths of Turkey

Roughly ten years ago, spa and beauty industries around the world, touted mud treatments as the newest trend to combat ageing and aid healthy living. Yet, while we can commend their enthusiasm for the concept, using mud as a beauty treatment is a timeless technique stretching back thousands of years as seen in the mud baths of Turkey, Peru, Costa Rica and the Dead sea.

Cleopatra, the queen who captured the hearts of many admiring suitors often splashed around in mud, and in later years, the practice became known as balneotherapy. Although often marketed to aid ailments caused by arthritis, professionals are yet to jump on board and confirm the claims. However, the instant tingling and tightening of the pores, proves its effectiveness for skin conditions and delaying the signs of ageing.

Tapping into the spa and wellness tourism industry, the mud baths of Turkey are one of the country’s biggest attractions. Often marketed as a fun day out for everyone, because of their natural settings, any ticket tout, worth his salt, sells them as the perfect way to look ten years younger, because of the high concentration of sulphur. Yet for adults and kids alike, there is something remarkably fun and innocent about splashing around in mud.

Resting slightly inland in the Mugla province of Turkey, Dalyan is not only a popular holiday destination but also favoured by expats, drawn in by low property prices and its astonishing ability to still be authentically Turkish. As the most popular mud bath destination in Turkey, famous international celebrities who have dipped their toes into the sludgy pools include Sting, David Bowie and Dustin Hoffman. 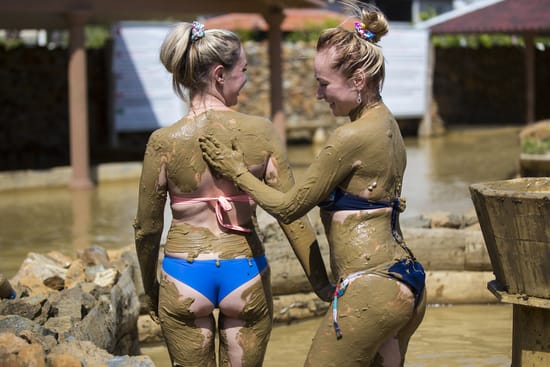 Much of the lure is its location, which is close to surrounding holiday resorts such as Fethiye and Marmaris, but as well as visiting the mud baths on the far side of Lake Koycegiz, day trippers also get to enjoy other attractions close by. Often getting around on small boats, they include Iztuzu beach, one of the prettiest in Turkey and the ruins of Caunos, instantly recognisable by their Lycian rock tombs overlooking the river.

Whereas Dalyan is popular with foreign tourists, fewer foreigners visit Afyon. However, most Turks around the country know the region as an esteemed centre of spa and wellness. The mud concept is also entirely different to that of Dalyan, because of the application method. In days gone by, people did lie in a proper bath, but because of the messy results, professionals now apply it by hand, while you are lying on plastic sheets.

Removing the concept of a family, fun day out, most Turks do pay for it purely for the health benefits. Sandikli, the area of Afyon famous for its mud, say it is radioactive, as well as having organic ingredients. While this may seem alarming, they just promise that it is more efficient at easing aches, and pains, and firming up the elasticity of the skin. 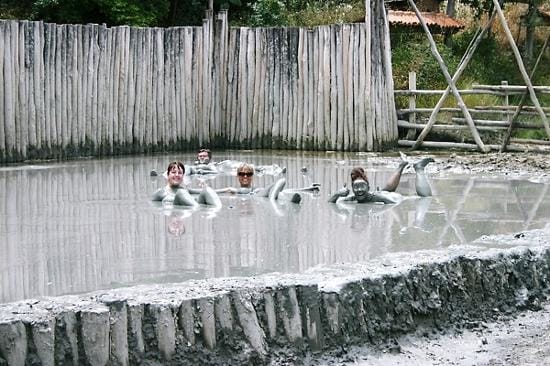 The small area of Karahayit near the calcium pools of Pamukkale in Aegean Turkey also has a small mud bath that people can use for free, but it can’t be compared to the magnificence of Dalyan. However, if you are willing to forgo the standard natural mud treatments, the good news is that many places around Turkey including Pamukkale, still have natural thermal springs, which likewise have the high concentration of sulphur that is the core ingredient of mud treatments.

Ayder Plateau in the stunning green Kackar mountains offer the chance to swim around in thermal pools, but masses of hotels in the Balcova district of Izmir dedicate themselves purely to this concept. Sitting on the old site of the baths of Agamemnon, mythological legends say wounded soldiers used the baths to heal wounds suffered during battle. The hot spring complex of Balcova has the capacity to deal with 3,000 people in one day proving its reputation as one of the best springs in Turkey.

Yalova in north-western Turkey also achieves fame for its hot thermal springs. The Armutlu thermal resort has for many years been a favoured destination for holidaying Turks, however sitting in a scenic forest setting, it is now also capturing the interest of foreign holidaymakers and property buyers. The natural landscape also boosts the theme of natural living, and after hiking or camping, diving into the thermal spring pools is a continuation of being at one with nature.