Out of all the historical sites in Turkey, the 4th century Sumela Monastery stands in a league of its own. Clinging to a cliff facing the Macka National Park in the northeast, western mainstream travel publications rarely feature it, yet as the northeast grows in popularity with Middle-Eastern tourists, every year, more people visit to discover its story, the ancient monastery and fantastic views over the green countryside.

Often booking a hotel in Trabzon city, they travel just 40 kilometres to reach it. Yet while cars and buses are allowed a certain distance, the rest of the walk up a winding path makes it unsuitable for anyone with walking difficulties. However, if you don’t mind, a strenuous hike uphill, Sumela should be on your bucket list of places to see in Turkey. 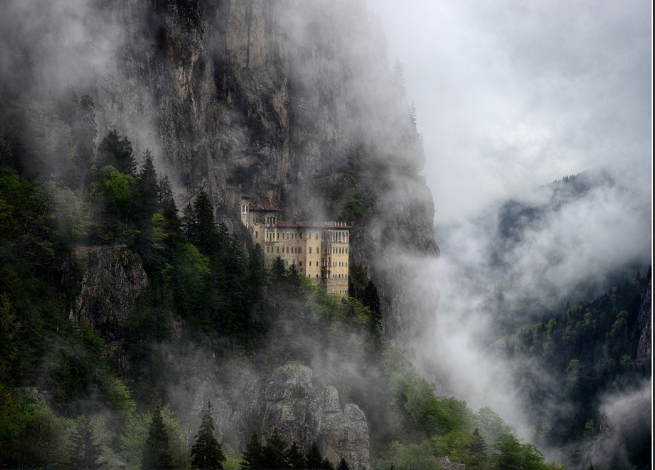 Once you reach the entrance, a flight of stone steps down passes living quarters on the right-hand side before entering the central courtyard. From here, visitors, explore the kitchens, and bedrooms, where monks used to sleep. The spectacular part though is the church, with marvellous intact frescoes adorning the walls and ceilings. In many places, people could not read or write, so religious leaders painted murals depicting Bible scenes on church walls and ceilings. 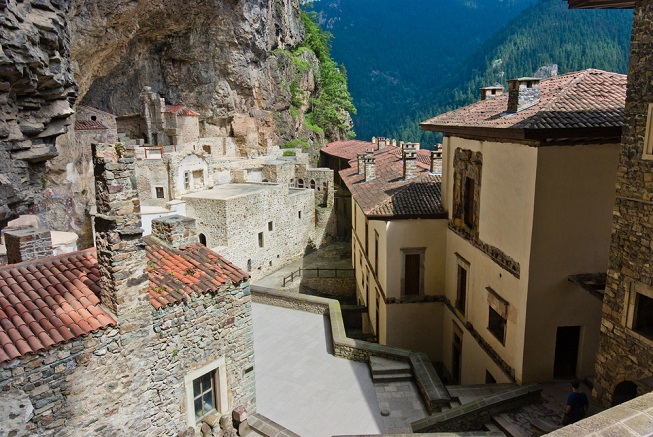 A lack of furniture means you need imagination to understand what the monks’ lives were like as they led a pious lifestyle, high in the hills of Mack Park. But why was the Monastery built in such a remote location with no easy access to daily amenities?

The History of Sumela

Stories cite a specific reason why that location was chosen, and it involved the Virgin Mary. They say, Barnabas and Sophronius, two priests originating from Athens, were walking along remote mountain roads where no-one ever went, and came upon a cave. Inside it, they discovered a Virgin Mary statue. The statue was black, hence resembled the Black Madonna which signified a miracle. Believing this to be a sign sent from heaven above and delivered by angels, they believed they were to build a monastery in the same spot.

For many years, monks lived and practised their religion in peace. Even when Ottomans conquered the area, they had rights and privileges. Continuing to receive donations, because the Virgin Mary also features in Islam, it was not until the early 20th century, that life in the monastery ended. The Turkish War of Independence had started and monks fled the monastery. It is believed that they took with themthe black Madonna statue.

Since the empty monastery had no-one to look after upkeep and maintenance, looters damaged parts of the frescoes and took whatever they could. One such example is someone who carved their name into the murals in 1956, and we can still see the damage still today.

However, one urban legend did not go away during that time, even when the monastery opened as a museum. Next to the church, constant dripping of water from the rock face attracted queues of people who believed it had healing power. Sick people travelled from afar to receive the blessing. This common belief also appears at Virgin Mary’s house in Seljuk, where three taps of mountain spring waters are said to bestow health, wealth, and fertility upon all that drink it. 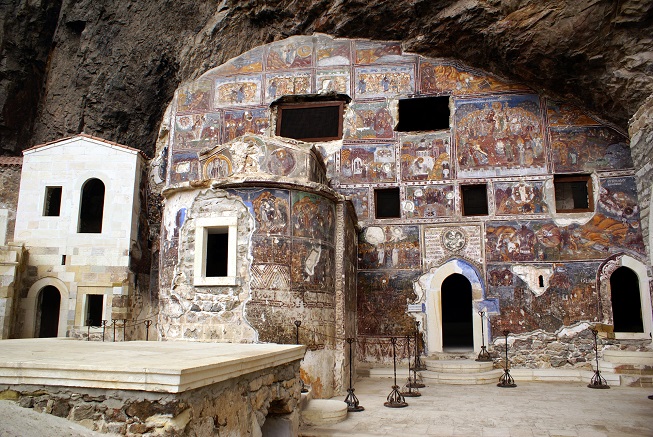 Following three years when it closed for renovations, newspaper reports said Sumela Monastery had reopened to the public in May 2019. However, Trip Advisor reviews report that improvements are still ongoing in certain parts. The official website says the monastery is open from 8 am and closes at 7 p.m. and 5 p.m. in winter.

There is a restaurant further down the hill for refreshments. Many people book a hotel in the nearby Trabzon city centre, and if time allows, other tourist attractions to see in the region include Uzungol Lake, the Hagia Sophia (not to be confused with the one in Istanbul,) and Ataturk Pavilion, a house where the founder of the Turkish Republic used to stay.

The Rising Popularity of Trabzon: The region was once an off the beaten track location, however over the last decade has risen in popularity. In this article, we look at what is fuelling Trabzon’s reputation for both tourism and foreign house sales.

Interesting Facts About Turkey: This A to Z guide lists facts about Turkey that you may not know from local food to regional folklore dances, events, festivals, weather, and places. Have a read and see how many you did not know.