BLOG The Blue Mosque of Istanbul

The handsome Blue mosque of Istanbul, also known as the Sultan Ahmet Camii, is one of the finest buildings in Turkey, and the world. The religious place of worship is an iconic landmark of old Istanbul, the capital from where the Byzantine and Ottoman empires ruled.

Built during the 17th century, the style, design and materials reflect Ottoman architecture at its greatest. It screams of perfectionism and one man’s quest to fulfil a promise made to his ruler that he would build the most magnificent landmark on this planet. Open to everyone, whether they practise Islam or not, it is one of the top visited attractions in Istanbul and Turkey.

History of the Blue Mosque in Istanbul

Construction of the Blue Mosque started in 1609, 8 years before its completion in 1617. The Ottoman Sultan Ahmed the First had grand visions of a magnificent imperial mosque, that would rival the Hagia Sophia, a former church sitting nearby, that was once the largest domed building in the world.

However, even before construction started, trouble was brewing, and plans got off to a rocky start, especially since money was involved. While his predecessors had built grand landmarks from the spoils of war, Sultan Ahmed instead used funds from the treasury, and this angered certain officials.

The second major hurdle to overcome was outrage at the intended design of six minarets, the tall columns pointing up to the sky, that typically defines mosques from other buildings. Traditionally only the highly respected Grand Mosque in Mecca had this amount. To ease displeasure, the sultan ordered a seventh minaret to be added to the mosque in Mecca, but urban legends say the architectural faux paus resulted from a misheard word. Sultan Ahmed wanted gold minarets (altin), but the architect heard six (alti.)

That architect was Sedefkar Mehmet Aga, an Albanian pupil of Mimar Sinan who is widely referred to as the greatest architect of the Ottoman Empire. Having used many of the designs and techniques as taught to him by Mimar Sinan, as well as incorporating Byzantine features as evident in the Hagia Sophia, the Blue mosque came to be known as his masterpiece. He was never to complete anything as grand because he died shortly after its creation.

Why is it called the Blue Mosque?

The exterior architecture doesn’t display any reflection of its name. Yet stepping through the doors, and looking up to the ceiling, the interior design reflects the name with blue tiles and paint illuminated by more than 200 stained glass windows letting in natural light. The tiles come from the Iznik region of Turkey, that has historically produced high-quality ceramic tiles and pottery, with its reputation peaking in the 15th and 16th centuries.

Inside the Blue Mosque of Istanbul

Approaching the mosque as if walking across the square from the Hagia Sophia, to the right-hand side, Muslims ritually wash at a long row of taps, before entering, through the large door on the left. Otherwise, most tourists use the entrance via the Hippodrome side, that spectacularly gives an impressive view of the courtyard, the ablution fountain and cascading domed roof. 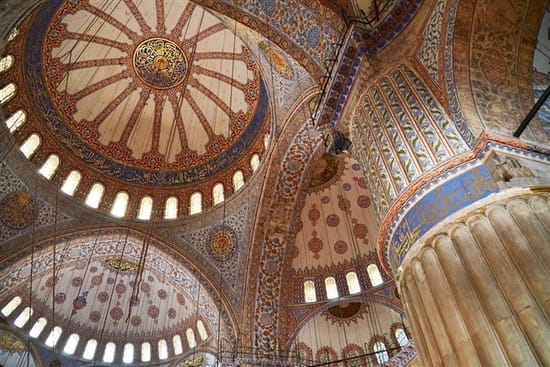 The only person allowed to enter the courtyard on horseback was the sultan, but for him to remember his place in relation to the divine, a chain hung across the open door on the western side so that he had to bow his head.

Walking into the interior, on the opposite wall from the entrance sits the mihrab, showing the direction of Mecca. To the left, is the loge, where the sultan and his entourage sat. To the right of the mihrab is the Minbar, used by the imam during prayers, but undoubtedly, the carpeted prayer hall, and the large chandeliers dangling above it boost atmosphere of the interior to another level.

Guidelines for Visiting the Blue Mosque of Istanbul

The mosque is open to everyone outside of prayer sessions, that happens five times a day for 90 minutes each. Set timings change as the year progresses, but signs at the entrance give the exact time. The session most likely to affect tourists is lunch time. Also try to avoid visiting on Fridays, the holy day of Islam because the mosque closes for longer, as more people attend.

Women should cover their head, upper arms, cleavage, midriff and legs. While men should also wear long trousers and short or long sleeve shirts. Even outside of prayer time, you may come across someone, who is praying on the carpet. They will kneel and bow their head as respect to Allah. So, mosque etiquette requests silence at all times during your visit.