BLOG The City of Konya: Rumi and the Whirling Dervishes

The province of Konya is the largest by area in Turkey, with no less than 31 districts. The provincial capital is the city of Konya, considered to be the birthplace of Islamic mysticism. The city has the reputation of being one of the more religiously conservative, metropolitan centres in Turkey, giving visitors a stark contrast to the experiences to be had in other bustling centres such as Istanbul, Izmir and Ankara. Once known as the “citadel of Islam”, its inhabitants are still comparatively more devout than those from other cities. However, Konya attracts nearly 2 million tourists a year as it is the resting place of Islamic scholar and mystic, Rumi and the place that set the foundations of Sufism, an inner mystical dimension of Islam.

Located in Central Anatolia, Konya has become place of interest for mystics and spiritualists and is most notably known for being the home of the intriguing whirling dervishes. Rumi, born in Afghanistan, settled in Konya with his father in the 1220s after fleeing the Mongol invasion of Central Asia. It was here that he established his spiritual doctrines through his Persian language poems, which have since been widely translated into many of the world’s languages. Today, Rumi is described as “the most popular poet” ever and the “best selling poet” in the United States. It was during his time in Konya that he wrote the ‘Mathnawi’, a series of six books of poetry and a spiritual writing that teaches Sufis how to reach their goal of being in true love with God. The ‘Mathnawi’ is considered to be one of the greatest poems ever written. The legacy of Rumi lives on in the city of Konya. 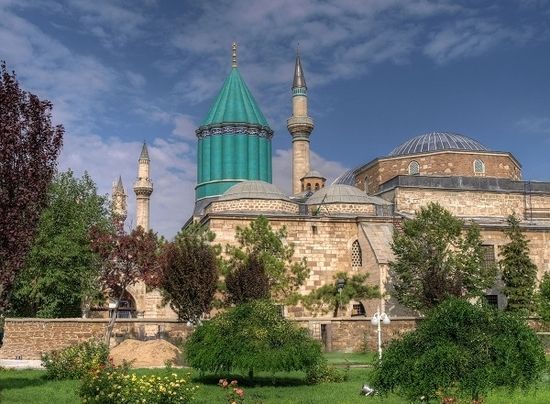 Rumi and Sufism, The Mevlevi Order of Islam

Rumi, his poetry and his teachings were the inspiration behind the Mevlevi Order of Islam, also known as Islamic Sufism. The movement was officially founded in 1273 by Rumi’s followers after his death. He was fondly named ‘Mevlana’ by his supporters, which translates as “our master” and even today, his influence transcends national borders and ethnic divisions: Iranians, Tajiks, Turks, Greeks, Pashtuns and the Muslims of Central and South Asia, have greatly appreciated his spiritual legacy for the past seven centuries. But now, his doctrines are highly thought of all over the world and nobody could have predicted just how popular his ideas would become. Sufism is centred around the core meaning of peace, love and tolerance on the road to enlightenment. 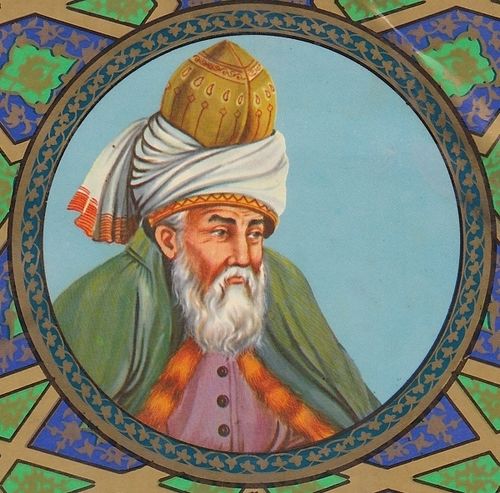 It is undeniable that Rumi was a Muslim scholar and took Islam very seriously. Nonetheless, the depth of his spiritual vision extended beyond the constraints of religion. He taught that the world existed as one and that the Light of Muhammad does not abandon anyone. Modern scholar, Shahram Shiva said that “Rumi was able to verbalise the highly personal and often confusing world of personal growth and development in a very clear and direct fashion. He does not offend anyone, and he includes everyone”. According to Professor Majid M. Naini, “Rumi’s life and transformation provide true testimony and proof that people of all religions and backgrounds can live together in peace and harmony. Rumi’s visions, words and life teach us how to reach inner peace and happiness so we can finally stop the continual stream of hostility and hatred and achieve true global peace and harmony”.

Rumi is buried in a tomb in Konya at the Mevlana Museum. The site now acts a shrine and a point of pilgrimage for millions of spiritualists and tourists every year. The Mevlana festival is held over ten days in December, with its culmination on the 17th, the anniversary of Rumi’s death. Sufis call this ‘Sabe Arus’, meaning “nuptial night”, the night of Rumi’s union with God. The festival is an authentic, indigenous gathering where spectators are honoured to witness magical, trancelike and elegant dance performances. Sufis gather, dressed traditionally in a costume of five parts; a robe with a weighted skirt, undergarments, a jacket, a belt and the traditional tall hat. The Sufis dance by spinning themselves around with their arms in the air, gradually increasing speed as they become transcended, with the intention of inviting the love of God to travel through their bodies from heaven down to earth. They are known as the Whirling Dervishes and their ritual dance is called ‘Sama’. 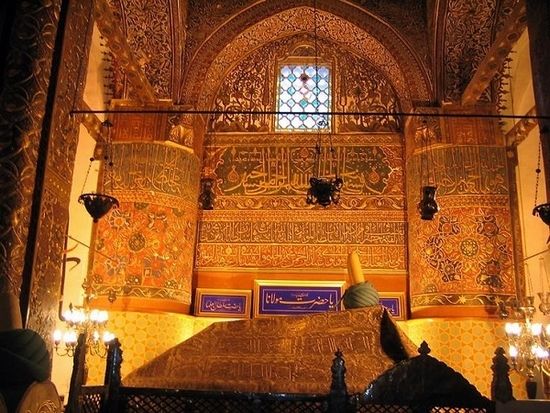 The Whirling Dervishes of the Mevlevi Order are the best-known practitioners of ‘Sama', though other forms can be found in the Alevi community of Turkey and the closely related Bektaşi Order. ‘Sama' is a means of meditating on God through focusing on melodies and dancing. It represents the mystical journey of man’s spiritual ascent through mind and love to perfection. He would then return from his spiritual journey as a man who has reached maturity and a greater perfection, so as to love and be of service to the whole of creation. The immediate goal of ‘Sama' is to reach ‘wajd’; a trance-like state of ecstasy. The experience of ‘wajd’ can sometimes becomes so strong that fainting or even, in extreme circumstances, death has been known to occur. 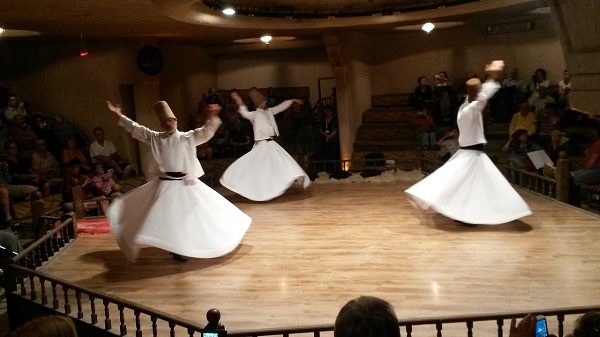 ‘Sama' incorporates the singing of hymns called ‘qawl’ and ‘nayt’, but also sometimes includes the playing of instruments; most commonly the tambourine, bells and flute. On occasions, you may also hear the recitation of poetry, which is said to aid spiritual contemplation. While Sufism sits within the limits of Islamic law, verses from the Qur’an are never used for this purpose as they are never to be set to meditation, not ornamented or improvised in any way, so that they remain sacred texts. This Sufi ceremony is performed as ‘dhikr’, the short prayers that followers of Islam repeat while counting the beads of a ‘tesbih’.

The spiritual rituals of Rumi’s Whirling Dervishes can also be seen as performances organised at various locations across Turkey. ‘Sama’ means “listening” and as the dancers begin to whirl, they use music such as singing, the playing of instruments and the recitation of poetry and prayers to aid their meditation. Rumi was of course the primary instigator of whirling. Supposedly, he was walking through the town marketplace one day when he heard the ‘dhikr’ through the rhythmic hammering of the local goldbeaters. He was so entranced in happiness that he stretched out both of his arms and started spinning in a circle. This later became the whirl of Muslim dervishes.

Whirling Dervishes can be seen in action all over Turkey and are even considered a draw for tourism in big cities like Istanbul. In 2008, UNESCO confirmed the “Mevlevi Sama Ceremony” of Turkey as one of the ‘Masterpieces of the Oral and Intangible Heritage of Humanity’.

There is a little more to Konya than Sufism and the whirling dervishes of course. The city and province is actually perfectly situated for a tourist wishing to explore Anatolia. Most of the land around Konya is flat, with a lot of lowlands and plateaus, covered with rich steppes which heavily influenced the area’s boom in agricultural economy throughout the 20th century. To the south though, Konya is largely surrounded by the Taurus mountain range, garnering great opportunities for hiking, skiing, wildlife enthusiasts and as an entry point to Turkey’s stunning Lake District. Nearby Beyşehir Lake for instance, is known to be the largest fresh water lake in Turkey and the centre point of one of the most important national parks in Turkey. Within the area there are two popular beaches and 22 islands to explore which promote water and mountain sport, perfect for the adventure traveller. 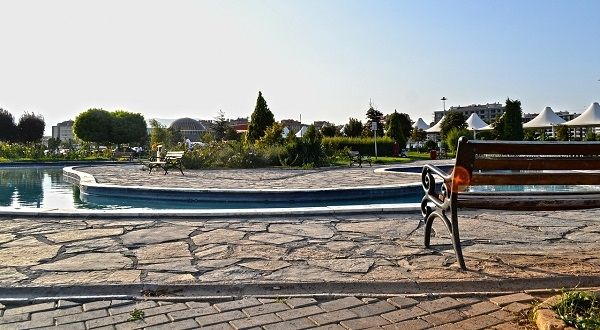 There is much to see and enjoy in Konya amidst the wonderful architecture. The antique village of Sille is just a few kilometres away, where visitors can explore ancient mosques, cave churches and catacombs. The 12th century Alaeddin Mosque is the principal monument on the citadel of Konya and served as a “Mosque for the Throne”, now the resting place of many Sultans. The modern and sophisticated Seljuk Tower provides a more cosmopolitan time in the city; a skyscraper and the city’s tallest building, within the Konya Trade Centre. The tower is a business and shopping centre with 42 floors elevating to 163m; the top two floors are a revolving restaurant which rotates once in an hour, offering panoramic views of the city.

While eating in Konya, be sure to try some of the local cuisine which traditionally includes dishes made of bulgur wheat and lamb meat. Konya’s most popular dish is ‘etli ekmek’, literally “bread with meat” Similar to ‘lahmacun’, a thin layer of bread is rolled out and topped with some spicy lamb, peppers, onions and tomatoes. Konya is also well known for its sweets, the most famous being ‘cezerye’, an old Turkish sweet made of carrots, and ‘pişmaniye’, which is similar to. 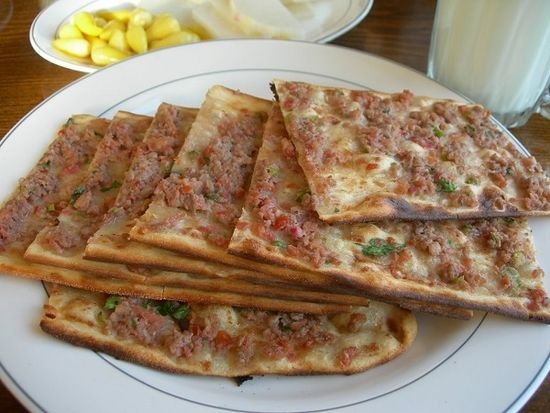 The most popular sight in Konya is of course connected to Rumi, Sufism and the whirling dervishes; the Mevlana Museum. It is actually one of the most visited museums in Turkey, second only to Topkapı Palace in Istanbul. The building also known as the Green Dome or the Green Mausolem, is the former residence of the Mevlevi Whirling Dervishes and is the place where Rumi’s tomb is located. The museum was once an expansive rose garden which was gifted to Rumi’s father by Seljuk Sultan Aladdin Kayqubat. Today, Rumi lies in a tomb next to that of his father and both tombs are situated upright to signify the depth of their bond as father and son.

If you have any interest in Sufism, the Mevlana Museum is the perfect place to start, giving a fantastic insight into what life through the ages has been like for the students of Sufism. Dervish cells and teaching kitchens, antique prayer rugs and a musical instrument collection, including the flute once played by the Mevlana himself are on display for visitors to explore. Most excitingly, fine specimens of ‘Masnavis’, books of poems written by Mavlana between 1278 and 1371 are also available to view. Do not leave without seeing the Ritual Hall, built under the reign of Salesman the Magnificent. In this hall the dervishes used to perform the ‘sama’ ritual dance. You may even be lucky enough to catch a dervish whirling at the Mevlana Museum in Konya.

The Mevlana Festival 2016 will take place in Konya between the 7th and the 17th of December.