BLOG The Grand Bazaar of Istanbul: Standing the Test of Time

The Grand Bazaar of Istanbul

In its efforts to modernise itself, the face of Istanbul is forever changing. Towering skyscrapers now dot the landscape, and districts like Levant enjoy esteemed reputations as international business hubs attracting younger generations eager to make their mark on the world.

Old Istanbul, previously called Byzantium and Constantinople is still easy to find though. The iconic landmark buildings of Sultan Ahmet were once the pride and glory of emperors and sultans, reflecting the bygone eras of royalty that once ruled these lands.

Yet, just a 15 to 20-minute walk away, and for more than 500 years, the Grand Bazaar reflects life for the everyday man on the streets. From the 15th century to present day, this is where workers toil, where vendors shake hands on trade deals, and copious amounts of money change hands in such a short space of time.

The growth of the Grand Bazaar to become one of the biggest markets in the world is a testament to its history and survival. Whereas many of the royal buildings of ancient Constantinople have become relics of the past with little use other than as museums, if the bazaar were ever to close, the city would just never be the same again.

In 1867, the renowned author Mark Twain along with a group of friends, left America, to embark on a lengthy journey visiting many countries including Turkey. He visited many sites including the Grand Bazaar of Istanbul. The giant, covered market that still stands today, left enough of an impression for Mark Twain to recommend that everyone sees it, albeit as more of an experience, rather than a notable, architectural wonder. He wrote…

“We went to the great Bazaar in Stamboul, of course, and I shall not describe it further than to say it is a monstrous hive of little shops—thousands, I should say—all under one roof, and cut up into innumerable little blocks by narrow streets which are arched overhead. One street is devoted to a particular kind of merchandise, another to another, and so on.

When you wish to buy a pair of shoes you have the swing of the whole street—you do not have to walk yourself down hunting stores in different localities. It is the same with silks, antiquities, shawls, etc. The place is crowded with people all the time, and as the gay-colored Eastern fabrics are lavishly displayed before every shop, the great Bazaar of Stamboul is one of the sights that are worth seeing.” 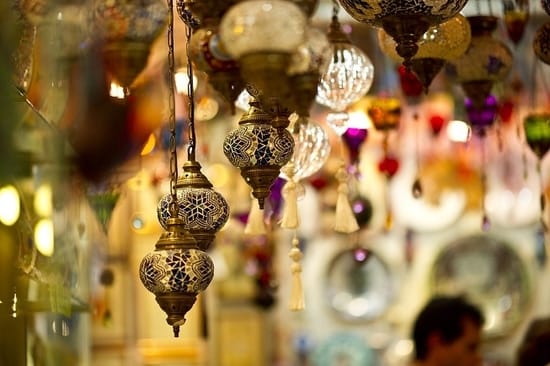 History of the Grand Bazaar of Istanbul

In 1455, two years after Sultan Mehmed the second famously captured Constantinople, authorities cornered off a small district and rented out spaces, as an intended source of income for the Hagia Sophia. Vendors set up shops and began to buy and sell their wares.

Such was the commercial success; authorities added more stores and streets continuously over the years. Naturally, with Constantinople, sitting on the main trading route of the world, more vendors flocked and slowly over time it grew to sixty streets featuring three thousand shops, two mosques, fountains, wells and several cafes and restaurants.

Even four devastating fires during the 18th and 19th centuries, and a massive earthquake were not enough to stop it. Yet current newspaper reports, say shopkeepers are voicing concern, about the preservation of the large structure, especially during rainfall.

To help restore the condition of the Grand Bazaar, authorities started extensive restoration work on its rooftop, a setting made famous when James Bond rode it on a motorbike in the film “Skyfall.” Officials received a lot of criticism for allowing Hollywood to embark on this dramatic rooftop scene, but they insisted, it didn’t cause any damage, and the current work is merely routine.

Regardless, because given the age of the Grand Bazaar and its gigantic size, it seems restoration work now has to be a yearly priority if it is to continue withstanding the test of time. 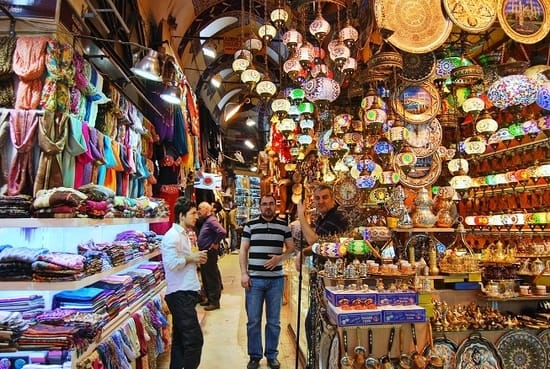 Visiting the Grand Bazaar of Istanbul: Need to Know

The Grand Bazaar is 75 acres of an intricate maze, set in an unperfected grid system. Upon first glance, it seems like a disorganised catastrophe, hence anyone entering without a map will most certainly lose their bearings, at some point.

While signage points the way to entrances and exits, we think losing yourself in the Grand Bazaar is part of the fun, but many travel agencies offer private guided tours, with opportunities to learn about the history on-the-spot.

Adhering to an age-old Ottoman tradition, of grouping vendors together depending on what they sell, districts are separated into jewellery, souvenirs, carpets, fabrics, antiques, household, and so forth. This is irritating to some while extremely covenant to others.

Most importantly though, is that buyers try the Turkish tradition of haggling on the prices. Usually done on purchases of a significant amount, haggling is essential if buying leather, carpets, gold or antiques.

The aim is to start off at 50% of the price quoted. The salesperson will, of course, laugh and tell a story of many kids to feed but eventually, lower his original quote, to which the buyer also raises his suggestion higher.

The exchange continues until both parties agree on a price, and shake hands. For those that are too shy to practice this ancient tradition, know that sellers expect you to haggle, so have already over quoted the original price. Hence, expect to pay over the odds if you don’t want to haggle.

As well as shopping for souvenirs, seek out the traditional jewellery workshops, many of which also tailor-make necklaces, bracelets and rings according to your own design. Artisans within these workshops still use traditional methods handed down through generations of their families.

Note: Opening times of the Grand Bazaar are every day, apart from Sunday, from 08.30 am to 7 pm.