BLOG The Tesbih - A Turkish Ritual

The tesbih of Turkey and Islam have a long and wonderful history which has led to the sometimes simple and sometimes ostentatious display of beads in the country’s history and culture. There has always been a strong bond between men and their beads in Turkey, stemming from a religious connotation as prayer beads, but later becoming a symbol of status and an instrument of conversation, meditation and peace from anxiety. It is said that you can tell one’s social status, preferences and personality traits from the tesbih that they own and how they use their beads, many carried as second nature to a man, as their mobile phones and every day belongings would be. There has been an increased female interest in tesbihs, but they mostly remain an almost exclusively male domain, many women choosing to buy a tesbih for their husbands or fathers rather than for themselves.

There are a few categories which can be evaluated when deciphering the richness of a tesbih. You would look at the materials used to make the tesbih, the number, size and texture of the beads, the harmonies of colour and the sounds that they produce and above all, the artisanship and craftsmanship used in making the tesbih. Perhaps surprisingly, some of the most precious tesbihs are the simplest, the least eye catching as the tesbih is not supposed to be used as jewellery but rather as a life companion. 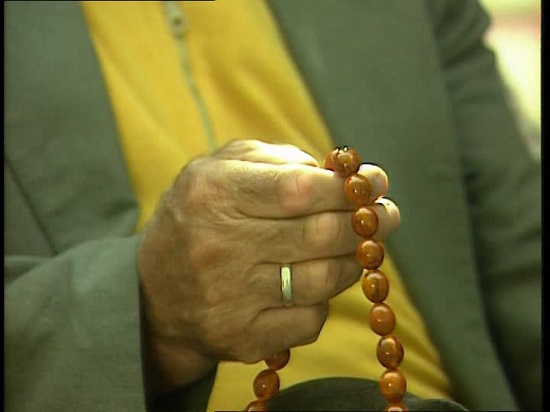 The exact origin of prayer beads remains uncertain, but their earliest use traces back to Hindu prayers in India, used as an instrument of worship as far back as 800BC. Buddhists probably borrowed the concept from Hinduism, but prayer beads are important in many other religions such as Catholicism, Orthodoxy, Sikhism and of course Islam where they are known as ‘tesbih’. In a religious context, the beads are fingered in an automatic manner, allowing the user to keep track of how many prayers have been said with a minimal amount of conscious effort, which in turn allows greater attention to be paid to the prayers themselves.

In Islam, the beads are traditionally used to keep count while saying the prayer known as the “Tasbih of Fatimah”, which was a form of prayer offered as a gift by Muhammad to his daughter, Fatimah, who in Islamic history is also said to have founded the tesbih. In the early years of the marriage between Ali and Fatimah, they were very poor, unable afford a servant and Fatimah suffered blisters and neck injuries from carrying out daily chores. Ali suggested that Fatimah ask her father Muhammad for one of his servants. The prophet did not accept their request, saying “there are many orphans starved, I must sell these servants to feed them”. He then said “I will give you one thing better than helping of servant” and taught them a special series of prayers now known as the “Tesbih of Fatimah”. Following the Battle of Uhud, Fatimah would visit the Martyrs’ Graveyard every two or three days, and used the grave soil of Muhammad’s uncle and close companion, Hamza ibn ‘Abd al-Muttalib, to create a tesbih. Soon after this, people began to make and use tesbihs for themselves. 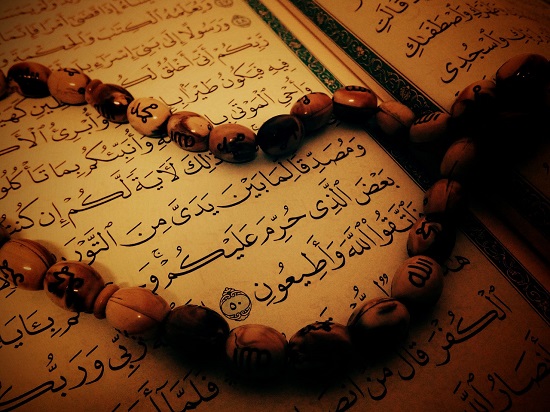 Across the world’s religions, the number of beads found on prayer beads varies greatly. Buddhists and Hindus use the Japan Mala which usually has 108 beads, or 27 which are counted four times. The Sikh Mala also has 108 beads, but the Baha’i prayer brads consist of either 95 beads or 19 beads strung together with the addition of five beads below. Roman Catholics use the Rosary, with 54 and additional five beads whereas Eastern Orthodox Christians use a knotted rope Rosary with 100 knots.

The Materials of the Tesbih

Prayer beads are among the earliest human ornaments, beginning with ostrich shell beads in Africa dating back to 10,000 BC. Beads were usually made from a variety of materials including stone, shells and clay. However over the centuries and across cultures and religions, a variety of plant seeds have been used for making prayer beads, such as Abrus precatorius, more commonly known as ‘rosary pea’, or ‘prayer bead’. These large, firm, bright red seeds are also used in jewellery and in percussion instruments. In Buddhist countries Thailand and Laos, prayer beads are made from the seeds of the Dracontomelon dao, also known as the New Guinea walnut tree. The seed surface typically displays an intricate pattern with an approximate five-fold symmetry and its five rhombic protrusions are reminiscent of primitive Buddha images. It is revered and called “Five Buddhas”. The Rudraksha seed is traditionally used for prayer beads in Hinduism.

In Turkey, the origins of prayer bead materials fall into four categories; precious stones, different types of wood, animal products or fossils. The harder the material of the bead or the rarer it is, the more intricate artisanship will be involved, therefore increasing its value. The simplest of tesbihs are often made of wooden beads, but also of olive seeds, ivory, amber, pearls or plastic. However, as the tesbih became a symbol of status and the importance or wealth of a person, more precious materials could be found. Some are made of gold, silver, tortoise shell and even camel bone or whale tooth, often brought from as far afield as Africa, the Far East and South America. Countless types of wood have also been used to create tespihs, such as snakewood, ebony, sandalwood, olive, sugar maple and teak, coming from exotic locations across the world such as India, Egypt, Madagascar and Brazil. 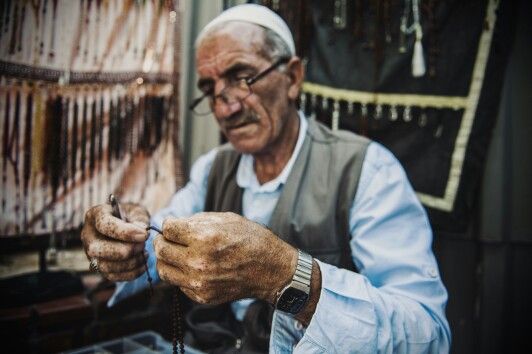 While the materials used to create a tesbih are of importance in Turkey, so is the name of the master who made it. Supposedly, the most beautiful tesbih was made in Istanbul during the Ottoman era. Historically, the best tesbih makers became famous for their skill at carving the beads. Drilling holes through them for instance, is one of the most difficult parts of the process and requires a steady hand and much practice and patience. The elegance and aesthetics of the tesbih may have reached its peak during the Ottoman era, but Horozun Salih is known as the most renowned tesbih maker from the late 1900s. During his lifetime however, the Grand Bazaar of Istanbul is rumoured to have been home to more than 300 tesbih artists. Some rare finds can see engraving work, precious stones and delicate carvings and openwork, many decorated with silver and gold.

Making tesbihs in Turkey has been a thriving industry for centuries and particularly in the past decade for both international and local markets. Traditional styles and methods are still applied today, with the addition of a few modern touches, but once the materials have been chosen, the process of creating a tesbih requires patience and dedication. Today, many buyers require their name to be engraved on stones or silver when attached to the tesbih, some ask for an “evil eye” design to ward off bad spirits. While most tesbihs are made with 33 beads, some required for prayer will request 99 beads while others take the tesbih to the next level, asking for in excess of 1000 beads. 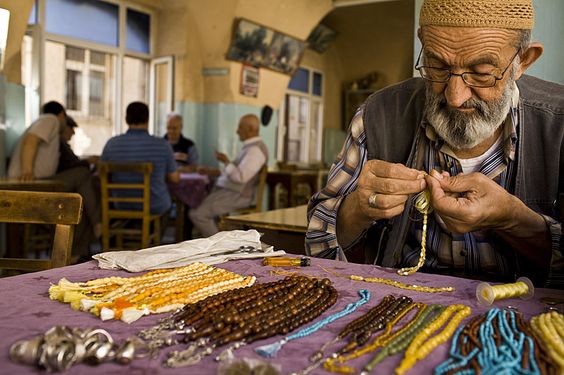 With a strong sense of history, variety, social importance and incredible craftsmanship, the tesbih has become a work of art and the number of collectors is increasing in Turkey. Even current Turkish President Recep Tayyip Erdoğan is a prolific collector and several other politicians have been known to pose with tesbihs in order to connect with their followers. Tesbihs are incredibly relevant religiously, historically and culturally and some incredible collections can be viewed across Turkey. Earlier this year a tesbih museum was opened at the Istanbul Art and Civilisations Charity which has attracted many international art fans.

Tesbihs in the Modern Day

The use of religious prayer beads in Islam has somewhat diminished over the years, except among adherents of Sufism; many use them nowadays as worry beads and as status symbols. In Turkey, as it is in Greece, the use of the tesbih has become a daily secular activity. The beads have made their way out of the mosques and churches and have simply become a companion to men. Many use the beads as a cure for boredom, an aid to pass the time, a distraction when attempting to stop smoking and as stress relief as it allows simple hand movements. The most common method of use is a quiet practice, pulling the beads between the thumb and the index finger. Some will hold all of the beads in one hand and roll them against each other to create soft clicking sounds, others will swing the beads so that they hit each other making a loud cracking noise. 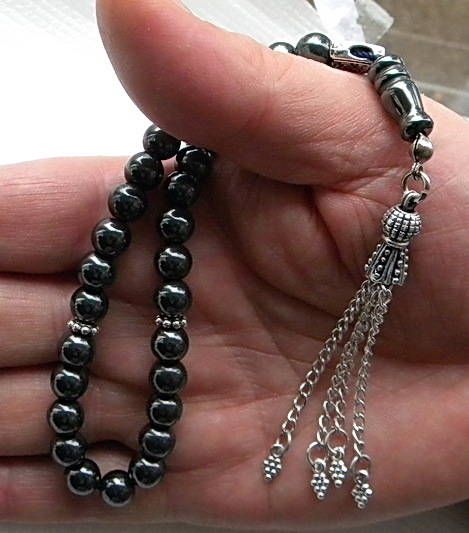 Some tesbihs are said to have health benefits aside from improving the hands’ dexterity. An anciently used material Kuka, a tropical fruit pit harder than coconut, was known as the tesbih of medical doctors during the Ottoman era. The material was known to act as a natural disinfectant and like several other tree based beads, released a pleasant scent when rolled between the fingers. Tree wood also darkens with use over time, like leather, increasing their worth. Although several precious stones are used in tesbih making, amber has gained popularity in recent yeas, prized for its beauty and calming effects.

Speaking of calming effects, the tesbih has also been a proven method of meditation, the goal of which is to obtain a feeling of peace, separation from worldly values and in general, developing Iman, an Islamic theology which combines belief with reason, accompanied by righteous deeds necessary for entry to ‘Jannah’ or ‘Paradise’, the Muslim concept of Heaven. The tesbih is a process to turn to when a moment of peace is called for or to control anger issues and anxiety.

The Turkish are renowned for using objects as a go to in a world that divides between good and evil, peace and discord and some believe that the tesbih can act as a good luck charm to ward off evil or misfortune. The tesbih could really be the Turkish answer to every personal problem!