BLOG The "Year of Troy" in Turkey

The "Year of Troy" in Turkey

Turkey's Ministry of Culture and Tourism has declared 2018 "The Year of Troy". More than 700,000 people are expected to attend events in honour of this legendary site. From war re-enactments and music and theatre performances to the long-awaited opening of the Museum of Troy, 2018 is sure to be an exciting year for history lovers and anyone interested in the romance, intrigue, and legend surrounding Troy.

Troy - one of the most significant archaeological sites in the world.

Troy is one of the most famous archaeological sites in the world and has been listed as a site of "outstanding universal value" by UNESCO since 1998.

Most of us will have heard of the Trojan war and Homer's poem, Iliad. We are likely to have heard of Helen of Troy, the Spartan queen whose beauty is said to have launched a thousand ships. Legend says it was Helen's love for Paris (Alexander), the son of the King of Troy, that provoked the epic battle, a war lasting years and only ending due to a giant wooden horse enabling the Greeks to storm the city.

Troy boasts a fascinating past. It is a bronze age site dating back more than 4,000 years. Questions on if the Troy documented in Homer's Iliad really did exist, and if the site in Turkey was indeed the location, have been debated by scholars for decades. It was only recently, following a series of significant finds, that a link between the two was finally accepted. The sites myths and legends have been the inspiration for many books, a television series and even a Hollywood blockbuster starring Brad Pitt and Orlando Bloom.

A Brief History of Troy

The ancient site of Troy is located in ancient Asia-Minor, known Anatolian Turkey today. Its position near Canakkale (Gallipoli), right at the mouth of the Dardanelles Strait, made it a crucial trading route controlling access to the Black Sea and Eastern Mediterranean. Troy would have been a thriving city in 1300 BC, during the Bronze Age. This was a time of powerful kingdoms, palaces, ruthless kings and fierce battles. Silks, spices, gold, silver, and slaves were all traded between lands and Troy's location, controlling access on the Strait, was understandably enviable.

Bronze Age politics were complex. The Hittites (ancient Anatolians) controlled much of what we now know as Lebanon, Syria, and Turkey. They wanted to expand their empire and take control of Troy, a city resisting Hittite inclusion. A political treaty discovered in Hattusa, the Hittite capital, suggests that there was a city of importance near the Dardanelles Strait (Troy). This city was ruled by King Alaksandu - most likely Homer's Paris, the prince named Alexander at birth. It is thought that the almighty battles that resulted may well have been the inspiration behind the Iliad. 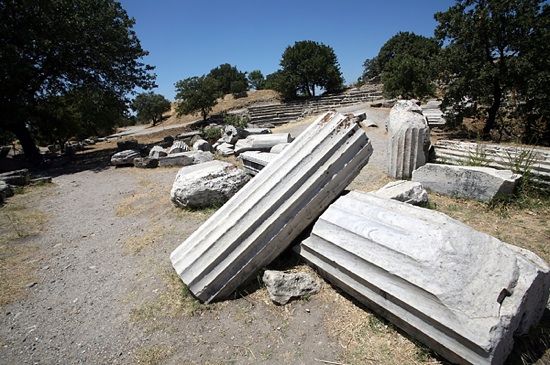 Events marking the "Year of Troy"

Turkey's Culture and Tourism Minister, Dr. Numan Kurtulmus, declared 2018 "The Year of Troy" in support of the European Year of Cultural Heritage. It is his hope that celebrations will help promote cultural sites and encourage visitors to Turkey. Kurtulmus is quoted, "both the legendary poem and the archaeological discoveries at Troy in Canakkale have played an important role in forming the identity of ancient and modern-day Turkey".

The Tourism and Culture Ministry has many events planned. There will be a new visitor centre and theme park in Canakkale. The State Theatre, Opera and Ballet will hold special performances and there will be a number of war re-enactments, talks, and symposiums throughout the year.

Other notable events will include:

The Grand Troy Meeting: A cruise ship has been chartered to follow the Aeneas route and bring guests to Canakkale from Rome along the path originally taken by surviving Trojans after the war. The ship's arrival will coincide with the start of The Grand Troy Meeting and the opening of the Troy Museum this autumn. The meeting will consist of four days of themed concerts, shows and sporting events.

New Troy culture route and St Pauls Way: Two new cultural trekking routes have been established. The 'Troy Culture Road' starts in Canakkale running along traditional paths via 10 villages and ending at the ancient sites of Alexandria Troas. 'St. Pauls Way' is the second route starting at Alexandria Troas and passing through 14 villages en-route to Assos.

June 20th will see the start of the Trojan Food Festival held in Canakkale, there will be a sailing competition during July, and a Trojan Horse Film Festival is planned for early October.

The Museum of Troy

The grand opening of the Museum of Troy will be the highlight of the year. This 10,000 square meter museum will feature many archaeological findings from the site as well as the 24 pieces of gold known as the 'Treasures of Helen of Troy', which were returned having spent 125 years in America. The opening is set to be a grand affair and it is hoped that Brad Pitt, Orlando Bloom and Diane Kruger, stars from 2004 blockbuster 'Troy', will take centre stage at the proceedings.

For more information on Turkey's Year of Troy, take a look at this short video produced by Turkey's Ministry of Tourism and Culture, Turkey Home.