BLOG Things to do in Izmir City and Coastal Resorts

Formerly known as Smyrna in the history books, the Izmir Peninsula includes the main city centre and a splattering of scenic coastal resorts. It is the third largest metropolis in Turkey, yet holidaymakers and tourists to the country often overlook it in favour of Istanbul. However, a new trend is rising, and Izmir is gaining traction as an ideal city break destination. The list of things to do in Izmir cannot match the Byzantine and Ottoman iconic landmarks of Istanbul, yet it offers suitable alternatives that are as just as enjoyable.

Even though Izmir is a large city, its unique characteristics are immediately noticeable to first-time visitors. Distinguishing it from other cities in Turkey, patriotic locals adore their country, yet historically have always embraced global, art, music, and fashion trends, making them a forward thinking community. They enjoy their coastal living, offering no excuses for attitudes that to outsiders appear too laidback. They believe in living for the day by visiting beach clubs, indulging in a love of sports and much more. Often being the first to embrace global trends, visitors to Izmir enjoy meeting the locals while touring the attractions and main sites.

Fun Things to do in Izmir, Turkey

Tour the Heart of the City Centre

Start in the centre of Izmir city centre, with the Archaeology Museum displaying artefacts from historical excavations around Aegean Turkey. Nearby the Ethnographic Museum, in an old French hospital, presents clothing as well as local crafts from bygone days. Have your photo taken at the famous Konak clock tower landmark dating from 1901 before walking four streets to Kizlaragasi Han, an old Ottoman marketplace with iconic status throughout the peninsula.

The 17th century Polycarp church with beautiful stained glass windows is open from 3 pm to 5 pm. Otherwise, outside of these times, the nearby Agora highlights the market shopping district of Izmir when it was under Roman rule. The restored but bland architecture of nearby Kadifkale (velvet castle) doesn’t win fans, but its panoramic views overlooking Izmir Bay provide the perfect picture postcard scene to end a day touring. Alternatively, the 19th century Asanor in the Karatas district is a working elevator leading to a roof top restaurant with equally stunning views over the city centre. 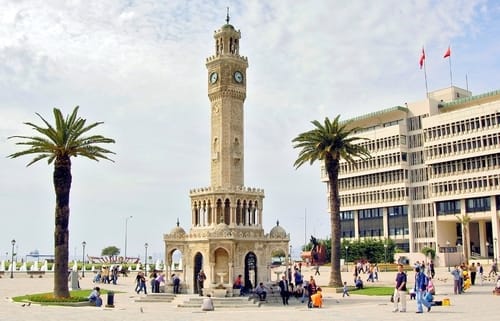 For shopping and a decent nightlife scene, the Alsancak district of Izmir city centre delivers exactly that and much more. Seaside restaurants serving Turkish mezes, as well as fresh fish and seafood make a roaring trade especially at sunset because of the vibrant view. Otherwise, the Izmir Cable car in the Balcova district promises a relaxing afternoon because of fantastic views, cafeterias and a chilled out atmosphere especially favoured by couples.

Although everyone enjoys visiting here, it seems to win most admiration from kids because of its child-friendly navigation. They easily learn about animals in a fun but informative manner because of signs with English translation. Izmir Wildlife Park goes to great lengths to distinguish itself from its old tainted reputation as a zoo and animals live in environments closely resembling their natural habitat. Alligators, birds, reptiles are all available to view up close, while large and baby elephants and cheetahs roam around vast areas so seeing them is not guaranteed. A café selling refreshments and lunch ensures families enjoy a full day out with happy kids.

For decades, famous and wealthy Turks from the major cities have purchased holiday and retirement home in coastal holiday resorts of Izmir. In recent years, foreign expats looking for an authentic Aegean lifestyle have also flocked to the area. Foca is popular, but Cesme and Alacati coastal resorts lucratively enjoy international fame.

Alacati, part of the Cesme district is the windsurfing capital of Turkey and annually holds world championship events. While the blue and white quaint architecture and cobbled streets of the old town lure non-sport fans. Boutique hotels attract famous Turkish celebrities, while the inspiring atmosphere leads artisans to lease studios in the region. It is just a 45-minute drive from Izmir and worth staying overnight for in summer to experience the unique Aegean vibes.

One-hour drive away is one of Turkey’s most visited attractions, the old city ruins of Ephesus. Receiving millions of visitors annually, it is an important historical landmark because had life continued, it would have rivalled Rome. Sign up for a guided tour or buy an audio version from the entrance gate. Ancient buildings and structures including the gymnasium, Hadrian’s temple, and latrines but three, in particular, are the most photographed and admired.

The Roman terrace houses of which there is an additional entrance fee, display marvellously intricate mosaics and a great insight into Roman community culture. The two-storey Celsius library was the third largest collection of the ancient world, while the 25,000-seater theatre was the scene of the famous Artemis riots, political events, and gladiator fights.

Last on our list of things to do in Izmir, ancient Pergamon that was a centre of learning and art is 2-hours in the opposite direction of Ephesus. Steeped in tales of old pagan worship, landmarks to see include the Acropolis, and red basilica but the steep theatre nestled into the hillside wins overall admiration.

The ruins of Pergamon spread out over a significant distance into two main quarters so visitors should book a package tour. However but if you hire a car instead, this is also a great opportunity for a mini road trip. Stay overnight in Bergama, explore traditional Dikli, and on the way back to Izmir, make a detour to see the marvellously restored Roman gymnasium and bath complex of ancient Sardis.

Note: By staying in Izmir, and visiting Ephesus, Pergamon, and Sardis ancient ruins, you will have seen four of the seven churches of Revelation as mentioned in the New Testament of the Bible. Take a 2-night road trip from Izmir to see the other three churches of Thyatira, Philadelphia, and Laodicea, which are all within suitable driving distances in the Aegean region of Turkey.

Further Reading: Some people make an overnight detour to stay in the Seljuk region, which you can read about here. Numerous landmarks include the famous Ephesus ruins as mentioned before, Saint John’s Basilica and the Temple of Artemis that was one of the seven wonders of the ancient world.