BLOG Turkey’s Air Travel Industry is Gearing up for 2018


During the last two years, the tourism and air travel industries of Turkey have suffered turbulent times. An attack on Sultan Ahmet airport that is also Turkey’s biggest, and an attempted coup played their part, yet Turks are resilient, and business still goes on. Even the laptop ban on all flights from Turkey to the UK and America did not deter them.

In fact, all indications say Turkey is gearing up for 2018 to be a successful year, especially for the air travel industry because airlines are reviewing their routes, increasing frequencies and the third Istanbul airport will open for business.

Pegasus Wants to Cash in on the Optimism

Pegasus has recently announced they are looking at the frequency of flights between Turkey and Europe, following a successful rebound from disastrous passenger figures in 2016. The Budget airline said they returned to making a profit in the second quarter of 2017, which was welcome achievements compared to the losses of 2016.

Stating that tourists are returning to Turkey, they are researching flight routes and frequencies between Turkey and Italy, Spain, Germany and the UK. As part of an order placed in 2012, they are expecting deliveries of two airbuses in December 2017 and in May of the following year.

No doubt, they will want to put those extra planes to good use. The statement by Pegasus believes that air travel in 2018 will return to the levels seen in 2015, and they are not the only airline thinking like this.

The leading carrier of Turkey announced that in August of this year, they broke all previous records reaching an unbelievable 84% seat occupancy. In the first eight months of the year, they carried 45 million passengers all over the world.

In 2017, they made a bold move to open a daily route to Somalia. Criticised by many industry experts as an unwise decision, they have said it is one of their most profitable routes.

They also responded to a social media campaign to offer discounted travel on their Istanbul to Jerusalem route, launched new promotion projects with Dr Mehmet Oz, the world-famous heart surgeon as well as renowned actor Morgan Freeman for the American Super Bowl.

However, it does not stop there. They also started flying directly to Phuket in Thailand while Sun Express, one of their subcarriers revised many flight destinations and frequencies including one between Moscow and Antalya, a favourite destination for many Russians holidaying and living in Turkey.

With the speed and determination that Turkish airlines does business, if 2018 is going to be the year of air travel in Turkey, they are most certainly likely to cash in.

The UK package holiday giant Thomas Cook has said that demand for Turkey is growing. However, the buzz was around an announcement by the budget airline Jet2 who launched a new route to Turkey and added 430,000 seats to their schedules for Antalya, Dalaman and Bodrum, therefore nearly doubling their capacity.

The new route is Birmingham to Dalaman, which will have two flights every week from May 2018 onwards, but one of the key differences is when the summertime schedules will start.

Traditionally most airlines kick in their summer programs to Turkey during May, and this has received much criticism from Turkish business and potential passengers who say April is an ideal time to start the tourism season.

Jet 2 responded and will start flying from Birmingham, East Midlands, Edinburgh, London Stanstead and Newcastle at the end of March. CEO Steve Heapy said, “Turkey is a fantastic destination offering British holidaymakers great value in addition to a stunning climate and rich culture.” 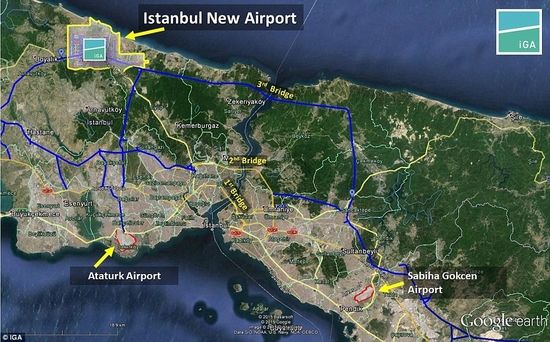 Istanbul Third Airport to Open in 2018

Putting the airlines aside, the eyes of the world are on the Istanbul third airport opening in 2018. Now under construction on the European side of Istanbul, it will be the world’s largest airport and no doubt, boost all stats and profits to record-breaking figures.

With an annual capacity of 150 passengers, it will replace Istanbul Ataturk airport, one of the busiest in Europe yet it lacks space and potential for modernisation and effectiveness.

In July 2017, the general directive of state airports authorities in Turkey said that demand for air travel had risen 10.5 percent every year, but plans for the new airport are likely to increase these stats even further, and the eyes of the aviation and flight industries are watching with eager anticipation.