When delving into Turkish wedding traditions, the first thing to know is this big affair sees hundreds of invites handed out to family and friends. Whether done on a budget or unlimited expense, Turks love to celebrate good times and often invite strangers, including travelling foreigners. If you have never been to a wedding in Turkey, accept any invite that might come your way because they offer a great insight into Turkish traditions. While times change and increasingly more Turks opt for a modern wedding, some time-honoured practises still brave the test of time.

Before we talk about weddings, let us answer a common question by most first-time visitors. Is Polygamy legal in Turkey? Turkey outlawed polygamy in 1926, and it carries a stiff imprisonment sentence if convicted. If a man says he has more than one wife, his first wedding was civil, and later marriages were religious, but the law does not recognise the latter. This example is rare and only tends to occur in remote regions.

Turkish wedding rituals differ from east to west according to regional traditions and the bride and groom's upbringing. Couples from remote village districts can spend up to three days preparing and celebrating the wedding. The village's small size makes this a community celebration, often taking place in the village square. Local women make food for guests, and men play traditional musical instruments for everyone to dance together into the night.

Otherwise, couples from large towns or cities often choose a salon wedding. For these types of Turkish weddings, the legal ceremony happens on the same night as the reception. Food and refreshments are served, and after the official ceremony, cake cutting and receiving the gifts, the band plays music. The newlyweds leave the next day for their honeymoon.

There are two types of weddings in Turkey, a religious ceremony and civil. The religious service does not involve vows or documents. An imam comes to the house, and only two witnesses need to be present. However, religious weddings are not legally recognised. For this reason, some conservative couples opt for both types of weddings and see the religious ceremony as the equivalent of an engagement. Modern couples mostly choose the legally binding civil service. 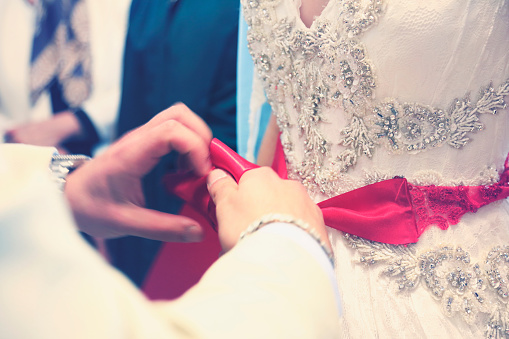 Red Belt and Veil: Turkish brides look beautiful in their big white dresses. Some may cover their head, while others spend all day in the salon to achieve the perfect hairstyle to make her groom look twice. As well as the white wedding dress, another similarity between most brides is the maidenhood belt. A red ribbon tied around the bride's waist is a symbol of her virginity. In the past, the absence of a maidenhood belt resulted in local gossip, but in modern towns and cities, the bride will choose if she wants to wear it. Similarly, some photos show Turkish brides wearing a red veil, but this is a rarity.

Shoes: Turkish marriage traditions often have the same meaning as their western counterpart. You may have heard about the sole of a bride's shoes. This Turkish wedding tradition is the equivalent of throwing the bouquet. The bride's friends write their name on the sole of her shoes. Whoever’s name rubs off by the end of the night; they are next to get married. Generally, this works for everyone if they don't use a permanent marker.

Henna Night: Old fashioned Turkish wedding customs are still alive in some parts, which involves the henna. Typically occurring a few days before the wedding, the bride's family and female friends gather at her house. Here, they will play music, eat food, and paint henna on her hands. Think of it as a bachelorette party. In recent years, brides often opt for a traditional henna night but mix it with modern trends, like music. The bride will also wear the traditional bindalli dress.

What to Wear to a Turkish Wedding?

Small Turkish village weddings promote a relaxed dress code; otherwise, always opt for smart attire. Men should wear a suit, and while women have more choice of what to wear, stay away from anything cut above the knee or showing cleavage. If the family is conservative, also cover your shoulders. Forget about the massive, fancy hats because Turks do not wear them. 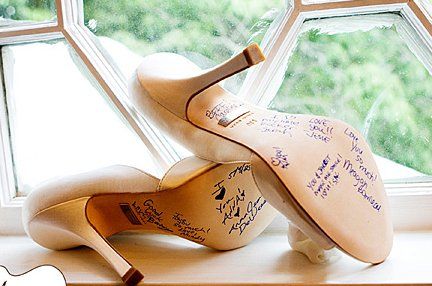 At the end of the service, confirming the bride and groom are now man and wife, attention turns to gifts. Anyone invited to a Turkish wedding can relax when it comes to the gift department. Forget the toaster, kettle or running around asking for gift lists because there are only two choices. After the couple has said yes and signed the document, red ribbons are placed around the couple's necks. Guests either give gold coins or jewellery or pin money to the fabric. This practical tradition sets the couple up for their new life together and ends the problem of receiving two or more toasters! Many couples keep the gold for years and only use it in emergencies when they need bash.

The couple's decorated car joins the convoy of guests to ride around streets beeping their horns. On the way, children block the car's path, and the aim is to get money from the passengers. After the couple hand it over, they continue their way to getting married and living happily ever after. Finally, when the new couple departs for their honeymoon, a lovely traditional parting saying is "Hayat Boyu mutluluklar dilerim," which means "I wish you a lifetime of happiness."

Get Married in Turkey

Getting married abroad is a popular, modern trend, and Turkey has embraced the concept as part of its tourism package. While you can organise it yourself, professional companies will guide you through the process like legal paperwork and organisation. You might want a traditional Turkish wedding, but many foreign couples opt for a modern wedding with their own theme. Popular destinations to get married include Istanbul, Fethiye, Antalya, Bodrum and Fethiye. Antalya is also a popular destination for Indian weddings, couples who often spend millions on a multi-day event.

Turkish wedding traditions are a fascinating insight into modern and time-honoured rituals. However, to find out about Turkish culture, delve into daily life and aspects like common sayings, pregnancy, food, hospitality, and more. From the fascinating insights of rituals like the Turkish bath to what those symbols on a Turkish carpet mean, we discuss them all in this article about daily Turkish traditions.

About Us: We are Turkey Homes, a property and investment specialist with offices all around the country. We've helped hundreds of people move to Turkey to live their dream life abroad. We collected all our local knowledge to form our blog about Turkey to help anyone who wants to know about the culture, food, people, history, places, and traditions.