Turkey hosts many of the best preserved antique theatres from the Greek and Roman civilizations in the world. The small Hellenistic Antiphellos Theater in Kaş claims one of those spots.

The small holiday resort town of Kas on the Mediterranean coast of Turkey has one central landmark to boast about, and that is the restored Antiphellos Theater. Standing at the entrance to the theater, its size pales in comparison to other theaters like the ones in Ephesus and Pergamon. However, the main attractions are the breathtaking views of the sea.

Formerly a suburb of the more popular port city of Phellos, the ancient Lycian settlement overtook its parent town. During the Hellenistic times and the Roman period, the town gained more importance and developed as trade increased for timber. As Antiphellos grew, so did the city and it provided its residences with an agorà or marketplace, two baths, and a theatre. 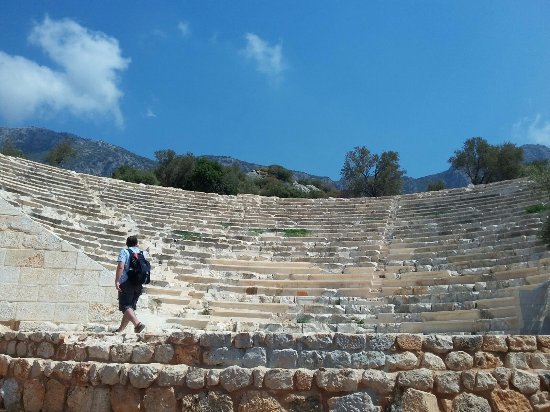 More recent archeological studies revealed the settlement consisted of buildings near the harbor and several rock tombs built into the Acropolis Hill behind the theater. For unknown reasons, Antiphellos was all but deserted by 1828. Over the following decades, new residences gradually rebuilt Antiphellos and scholars rediscovered the city ruins. Antiphellos, or Antiphellus in Greek, is now called Kas and is a modern tourist resort which attracts an ever-growing number of holidaymakers.

Information about the Theater

The theater seats 4,000 spectators in the remaining 26 rows. Masonries built the theater in the 1st century BC with local limestone. Unfortunately, the renowned earthquake in 141 AD which wreaked havoc throughout the Lycia region also caused damages in the theater.

The theater initially had 28 rows but due damages due to seismic activity and weathering, only 26 rows were able to be reconstructed. The latest restoration finished in September 2011 used a mixture of blocks from rows 27 and 28 and similar supporting materials. While the repair is impressive, it, unfortunately, gives the theater an all too clean and tidy appearance. A small price to pay for allowing the theatre to continue to host public events.

The theater identifies as Hellenistic by three elements: a horseshoe-shaped auditorium, a round orchestra, and a separated scene-building area. The skene or scene building area created for the stage and changing rooms where actors changed costumes or masks and made scenery changes. This area was built on two levels and was separate from the auditorium. Theatre performances and events accompanied local festivals where people, often from far away, celebrated and sold goods. 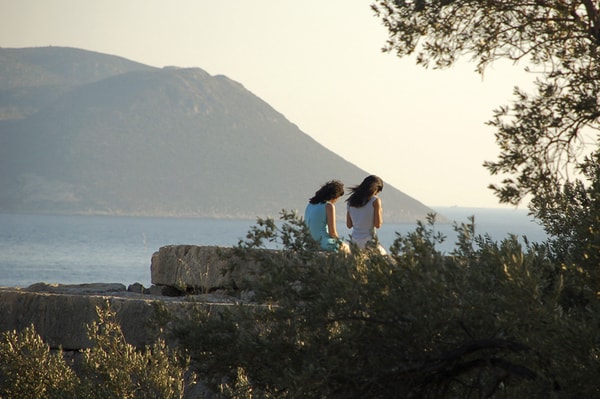 Views from the Top

The views of the Antiphellos Theater invite visitors to climb to the 26th row of the theater. Enjoy scanning the city of Kaş to the east with the surrounding bays holding their gullets and boats and the harbor walls protecting the bay waters. Discover too the low rolling hills lush with vegetation throughout the region. The view also captures the vast blue waters of the Mediterranean. The Greek island of Meis is visible and invites you to explore an entirely different country just one ferry ride away from the coast of Turkey.

How to get there

The theater sits just 500m west of Kaş' main square. Take a leisurely 5-10 minute walk westward along the coastline up into the hillside theater. Besides summer holidays, the theater greets you with smaller crowds or even solo tours. Entrance is free.