BLOG Where can one grab the “best ice cream” in Turkey?

During the warm summer months, a favourite activity in Turkey for the locals and tourists is indulging in the queen of desserts, that is ice cream. Well established and decades old ice cream shops in Istanbul and other parts of Turkey make a roaring trade while serving up delicious flavours such as vanilla, strawberry, cherry, lemon and more. Naturally, though, some places, especially those that make their own ice-cream enjoy esteemed reputations as the best ice cream shops, so let’s find out who they are.

Since 1969, Ali Usta in the elite seaside neighbourhood of Moda in the Anatolian part of Istanbul has been an authentic brand among ice cream lovers and can boast of a reputation as one of the best ice-cream stores in the country. Offering about 30 different traditional Turkish flavours such as Santa Maria, Hazelnut, Walnut and Melon, during summer long lines of people brave the heat simply to taste the delicious specialities on sale. There are a few tables inside, but the tradition is to grab a cone and walk around the neighbourhood parks. The ice cream shop serves its customers from 8 am to 4 pm every day. 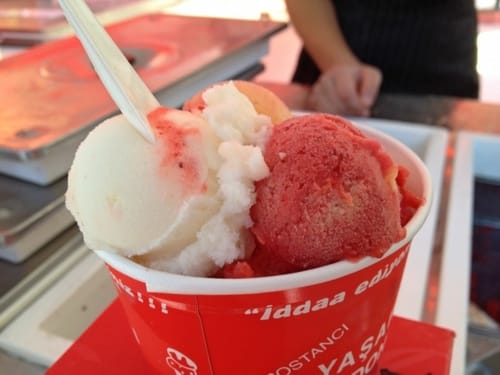 Yasar Usta (master) is another expert Turkish ice cream maker using only fresh fruits and flavours without preservatives. Yaşar Usta has been serving ice cream lovers in Istanbul at Bostancı on the Anatolian side of the city since 1962. Tongue licking flavours for sale include red plum, Cicibebe, fig, mastic, chestnut and even tomato and carrot. Yaşar Usta has seven separate locations in Istanbul open from 10 am until midnight.

The “Mini Ice Cream” in Bebek, the most prominent quarter of the town, is possibly the smallest ice cream shop in the city with just four-square meters of serving space. Serving ice-cream lovers, since 1968 with flavours such as Turkish delight, mastic, caramel and raspberry, this tiny spot enjoys the admiration of loyal and regular customers passing by every day.

Mado “Ice Cream Manufacturer” has been a success story as a sweet shop starting from 1992s and evolved from a single branch serving coffee and ice cream at Caddebostan neighbourhood in Istanbul to a chain with many branches in Turkey. Today the company serves many traditional Turkish delicacies, such as Maraş ice cream, typically viewed by Turks as the best brand in the country.

The most popular ice cream brand in Bodrum is the Bitez Ice Cream Store. It resembles a basement house, painted and decorated in a charming garden. The shop is open from noon to midnight in summer and winter, serving traditional flavours such as Bodrum tangerine, pomegranate, honey-almond, cherry and mulberry and as well as waffles.

The ice cream offered by Dondurmino which brings a taste of ALAÇATI, a prominent tourism centre on the Turkish Aegean, is made from milk produced in Çanakkale's Biga. Dondurmino owes its fame to the surf paradise of ALACATI and is open from 10 a.m. to 11 p.m. daily. The shop serves jelly with delicacies such as pomegranate, peach, hazelnut, rosemary and lavender. 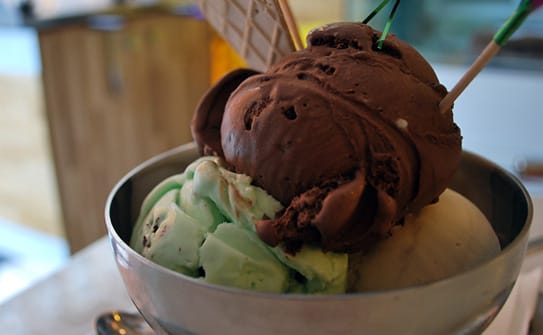 Made from goat milk and fresh fruit, “Alaçatı Muhallebicisi” is a story of success, and lately the brand has gone country-wide. The company has more than 50 shops across the country serving classic flavours such as mastic and mulberry and more.