BLOG Which Places In Turkey Have Snow?

Five Places in Turkey with Snow

So, you want to know which places in Turkey have snow. Unfortunately, there are not as many places as the United Kingdom or Sweden. However, speaking of destinations that do receive snowfall, visitors are assured of that perfect winter wonderland experience. Winter in Turkey starts in early December to eventually end in March. While December through to February is ideal for snowfall, some places dry up by March, so plan your visit well.

The thing to know is that Turkey has several different geographical zones. So, for example, snow in the south coast Mediterranean is unheard of. Likewise, Turkey is a mountainous country in some parts, and high altitudes mean snow is guaranteed. Two advantages of visiting Turkey in winter are fewer crowds and cheaper hotels because the mainstream tourism season has finished. With that in mind, let’s look at where to go in Turkey for a picture postcard winter scene.

Five Places in Turkey with Snow

Sitting six hours drive away from Istanbul, this ski resort becomes the go-to centre during winter for Istanbul locals who want to get out of urban landscapes and experience the thrills of the slopes. Covered with a thick pine forest, cleared areas are the perfect playground for beginner to intermediate ski and snowboard enthusiasts. Altogether they offer 20 kilometres, 18 lifts, and hotels, bars, and restaurants nearby offer a perfect après ski session. Kartalkaya ski resort sits in Bolu and in recent years has attracted more foreign skiers to Turkey as its profile took off on mainstream skiing scenes. Speak to anyone about skiing in Turkey, and they will likely list Kartalkaya as one of the best resorts. For the highest snowfall, time your visit for January. 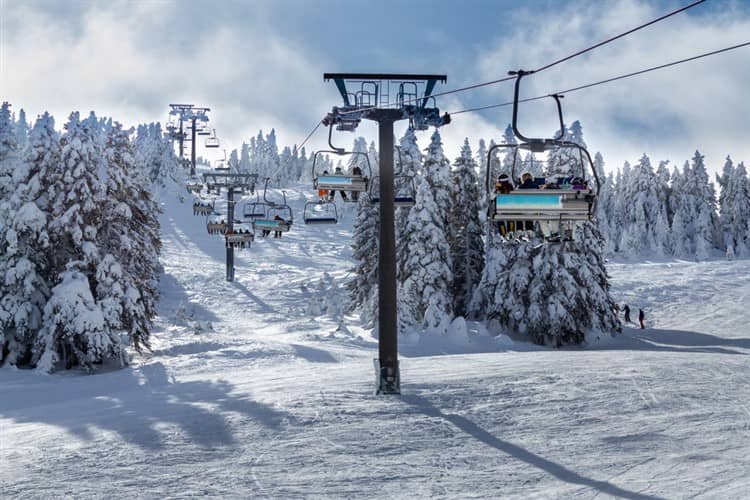 2: Winter in Bursa and Uludag

Combine a city visit with the great outdoors of Turkey in the Bursa region. Many landmarks in Bursa city centre belong to the UNESCO World Heritage site list because of their historical Ottoman empire. However, after touring, head up in the cable car to Mount Uludag, the prominent place where mythology says gods watched the Trojan wars. Sitting 10 kilometres outside of Bursa centre, as well as skiing and snowboarding, visitors also rent snow sledges and bikes. Expect 28 kilometres of slopes, best visited during January to February. Uludag is Turkey's most extensive ski centre and is popular during winter. In Turkey, other popular ski resorts include Kartepe, Palandoken, and Mount Erciyes in the Kayseri district. More about skiing holidays in Turkey. 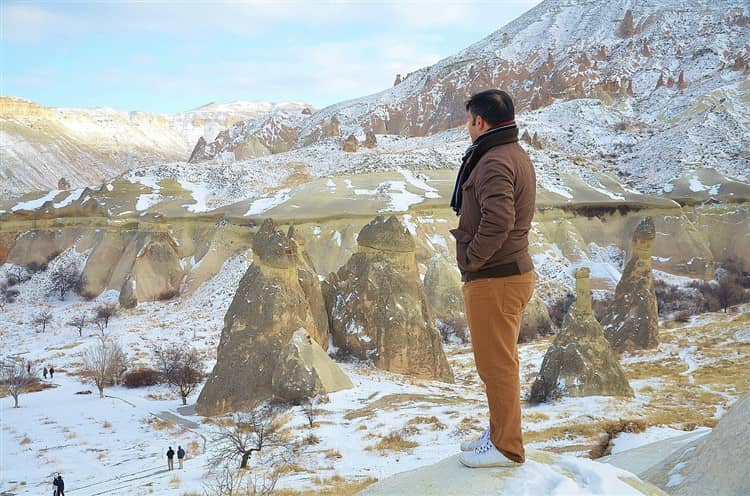 Now, this is our favourite winter destination in Turkey. Call it a fairy tale landscape. Cappadocia is known for its lunar-like landscape and weird-shaped rocks formed by thousands of years of wind erosion. While it is a fantastic sight in summer, during winter, landscapes views are mesmerising. Be sure to stay in an original cave hotel so after exploring, you can head back to your room and strike up the log fire. Of course, the most popular activity is an early sunrise hot air balloon trip. Otherwise, other attractions to put on your bucket list include Derinkuyu underground city and Goreme open-air museum featuring ancient cave churches dating from the 14th and 15th centuries.

4: Places in the Bolu Province of Turkey

Head to the Bolu province for a snowfall setting of mystical lakes and forests. Over the last ten years, one of the favoured places in Turkey to head to during winter is Golluk and Abant lakes of the Bolu province. Without snow, Bolu captures everyone with landscapes of natural beauty, but when snow falls, the white theme adds to a winter wonderland concept of another time, another place. Some people walk around the lakes or enjoy a horse-driven carriage ride, while others arrive with BBQ in tow to enjoy a family day out. From Istanbul, many local tour agents sell day trips to Bolu or book into nearby hotels for an overnight stay. Any visitors in the Bolu province of Turkey should try the local cuisine like pepperoni and shop in local bazaars for souvenirs.

Now, this is worth booking more than two nights because there are ample things to do when snow falls. First, explore the city's historical old part that features architecture from when Russians ruled this area. Ancient Ani features many historical churches from this old Armenian kingdom on the city outskirts. Then, to hit the slopes, head to nearby Sarikamis ski centre or head to Lake Cildir for a horse-driven carriage ride over the frozen sheet of ice. Kars is also the finishing point for the Eastern Express, a train ride from Ankara that became an Instagram hashtag trend. Tickets sell out fast, so book yours quickly to arrive in Kars with style.

Does it Snow in Istanbul?

Istanbul is a hit and miss when it comes to snow. Even as temperatures drop, Istanbul might receive a couple of snowfall days during December or January, but there were some years when snow did not fall. Additionally, we are not talking knee depth snow either. Some places in Istanbul might receive a splattering of snow, while other areas do not. Expect average temperatures of 3 to 6 Celsius. This shows just how large Istanbul is. If you visit when it snows, get your camera out for some unique pictures around iconic landmarks like the Hagia Sophia, Blue Mosque and Topkapi Palace.

More About Snow in Turkey

Snowboarding Places in Turkey: You now know which places in Turkey have snow, but some also stand out for snowboarding. Do not underestimate the facilities, snowfall, scenery, or experiences await. While Turkey's reputation as an ideal beach holiday destination makes people think of sand, sea and sun, its snowboarding resorts are growing in popularity as Turkey seeks to transform itself into a year-round holiday place.

About Us: We are Turkey Homes, and collectively, we have more than 20 years of experience selling Turkish property to a global audience. With offices in many different places in Turkey, we work with many overseas buyers to help them find their dream homes. Turkey Homes offers independent, impartial, and expert knowledge about properties and the country. We also took our team's collective knowledge to form our blog about Turkey that will interest anyone who plans to visit or live in the country.