BLOG Beautiful Pamukkale and the Ancient City of Hierapolis

In the Anatolian, Denizli region of Turkey, a beautiful natural landmark sits on the side of a hill. Nicknamed cotton castle because of its appearance, Pamukkale, a collection of white calcium pools was in 2014, the most visited attraction in Turkey. Once you see for yourself, it is easy to understand why this mysterious landmark reflecting the power of Mother Nature has captured the attention of people all over the globe and takes pride of place on the UNESCO World Heritage site list of Turkey.

About Pamukkale and its Travertine Pools

As a natural phenomenon, science explains that the solidified appearance of the white pools that originally started from natural spring water is due to the high concentrate of calcium. Used as a centre of healing for wounded soldiers during the Roman Empire, Pamukkale and its spring waters, overlooking the small traditional village remained much of a secret until the 1970s when mainstream package tours of Turkey became popular.

Naturally, where there are masses of tourists, people spot opportunities to make money so hotels and shops sprung up all around the pools. Unfortunately as is the case all over the world, where man decides to build, the environment and habitat suffer. Waste accumulated in the pools and the flow of the natural spring waters disrupted into a disaster that would eventually ruin the natural landmark.

Government officials intervened, shut the hotels down, and altered the direction of the path for visitors. These days, diligent care involves cleaning of the pools, and all shoes must be removed before entering. These precautions do not deflect from the quality experience though and once inside the pool, visitors fully enjoy the warm, milky water around their feet, backed by snow like wall. 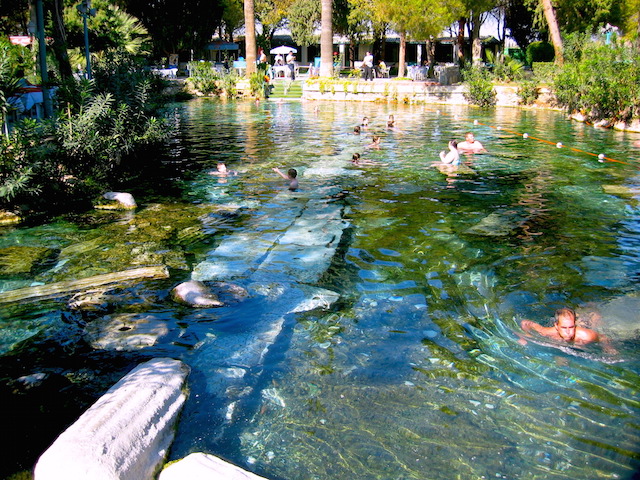 A short distance from the pools, guests pay an extra fee to swim in waters that science experts say help skin disorders, blood pressure, arthritis, and other neurological disorders of the body. Surrounded by restaurants, the pool, covers fallen columns from the ancient city of Hierapolis, and this area is particularly enjoyed by families.

The Ancient city of Hierapolis

Although the white calcium pools of Pamukkale receive all the attention, the neighbouring old city of Hierapolis is equally as stunning. Sitting alongside Pamukkale on the UNESCO world heritage list, Hierapolis that means a sacred city, dates from the 2nd century BC, and was given this name because of the mass amount of temples scattered throughout it.

With a close connection to the pagan gods and spring waters of nearby Pamukkale, the landmark structures were in their prime, magnificent buildings and although little of them remains today, exploring the ancient city is a great insight into previous life in this region.

Including the city baths, the Temple of Apollo and the martyrium of Saint-Philippe, the best place to explore has to be the half circle theatre nestled into the side of a hill. Although smaller, than other famous ancient theatres in Turkey, it sat approximately 10,000 people and the beautifully preserved marble reliefs on the front façade of the stage building stand majestically to portray perfectly how the theatre was the social centre of the city.

Hierapolis could boast about its magnificent Roman baths that these days, is the location of the onsite museum. Sitting between the travertine pools and Cleopatra's pool, the cheap entrance fee is worth it to see some marvellously intact sarcophagi and artefacts, uncovered at Hierapolis and other neighbouring ancient cities such as Laodecia. Within the   A room, tall and perfectly carved statues still maintain their grace and decorum, but it is natural that such excellent statues should be found in this area because the nearby ancient city of Aphrodisias was the city of sculpturers during the Roman era.

“Although many people visit Pamukkale and the ancient city of Hierapolis on a day trip from neighbouring holiday resorts, instead book overnight hotel accommodation in the small rustic village of Pamukkale. This will give you enough time to see and explore the nearby ancient cities of Aphrodisias and Laodecia that was one of the seven churches of Revelation.”