When deciding which historical places in Istanbul are the best to visit, get ready for an avalanche of choices. Covering the Asian and European sides, there is a historical story to tell on every corner. As the former ruling capital centre for the Byzantine and Ottoman empires, old buildings, churches, and mosques make up Istanbul's most popular tourist attractions.

From Taksim Square to Sultanahmet, whether you travel independently or join a group walking tour, the local landmarks and structures also make the city of Istanbul Turkey's top visited tourist destination. To truly understand their historical value, we recommend visiting with a tour guide, who knows the intricate background stories of how these places became some of the world's most iconic structures. But in the meantime, let us look at which places you should put on your list. 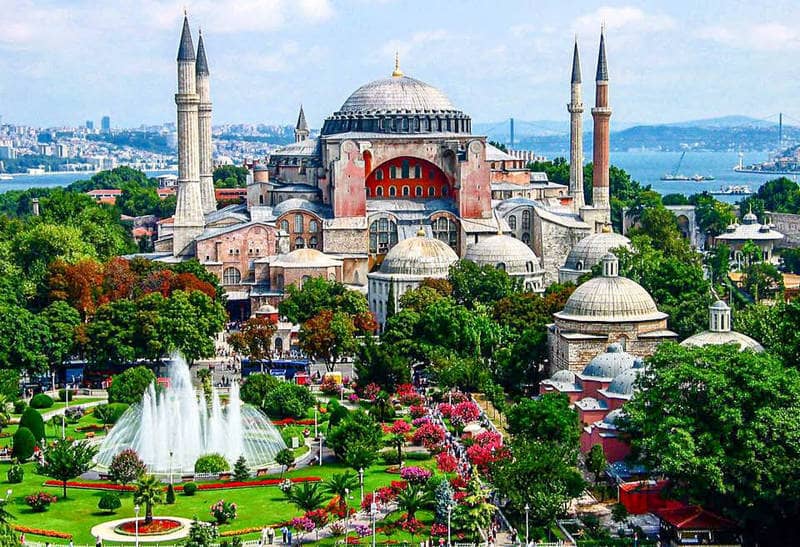 Standing in Istanbul's Fatih, Sultanahmet area, the grand Hagia Sophia is one of Istanbul's most iconic structures. Starting life as a Byzantine church, this place has also been a museum and reconverted back into a mosque. As a UNESCO World Heritage site, Hagia Sophia is famed for the magnificent dome that was the world's most prominent at the time of construction. As the dream of roman emperor Justinian, the Hagia Sophia also uniquely features stones from the Temple of Artemis, one of the seven wonders of the ancient world. Ottoman Sultan Mehmed the second, who famously invaded Constantinople in 1453, added the four minarets. An exemplary mosaic within the Hagia Sophia features the Virgin Mary holding baby Jesus, and the best place to view the interior is from the upper galleries. Hagia Sophia's courtyard also uniquely contains the tombs of sultan Selim the 2nd and sultan Murad the 3rd.

2: The Historic Blue Mosque of Istanbul

Also known as the Sultan Ahmet Cami of Istanbul, the 17th Blue Mosque is an iconic place of worship reflecting the best of Ottoman architecture. Open to everyone regardless of religious beliefs, time your visit to the Blue Mosque outside prayer hours. Originally built to match the grand and splendid Hagia Sophia, the design outraged officials as it included six minarets, a feature only Mecca's grand mosque had. The Blue Mosque's architect, Sedefkar Mehmet Aga, was a pupil of Mimar Sinan, the Ottoman empire's greatest architect, and he passed his impeccable skills on. Stepping through the doors, the interior ties earned the mosque its blue nickname. Additionally, 200 stained glass windows let in natural light and highlight the perfectionism of this Istanbul masterpiece.

Behind the walls of the 15th century Topkapi Palace in Istanbul, many generations of the Ottoman dynasty lived and ruled. Covering nearly 600,000 square meters, the royal palace housed thousands of people, making the large structure a mini-city within Istanbul. Altogether there are four courtyards to tour, and a must-see section is the harem where the sultan’s concubines lived, accompanied and watched over by the eunuchs. Sitting next to the famous Bosphorus straits of Istanbul and at the entrance to the Golden Horn, Topkapi Palace is just around the corner from the Hagia Sophia. An interesting fact is that Ottoman sultan Ibrahim accused 280 of his concubines of plotting to kill him. So, Ibrahim had them tied up in sacks and thrown into the Marmara Sea of Istanbul. Topkapi Palace is also home to the famous spoon makers diamond, and the sacred room holds prophet Muhammad's relics. 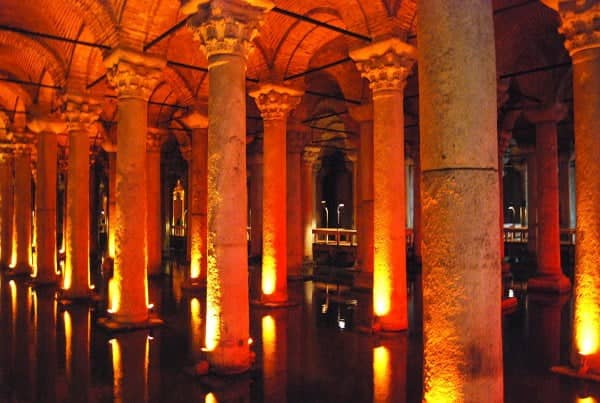 Sitting at the bottom of a stone flight of stairs in the Fatih area of Istanbul, this marvellous water reservoir captures overwhelming admiration. As another landmark Turkish building of the Sultanahmet district, walking platforms weave through 336, 9-meter-high columns. The interior lighting resembles, and classical background music makes for a peaceful visit, but the highlight is the Basilica cistern's upside head of Medusa. No one knows where they came from, but we can only suspect they are upside down due to the famous urban legends. Called Yerebatan Sarayi in Turkish, some sources say Byzantine Emperor Justinian built the cistern in 532, while others say Emperor Constantine did. Initially supplying the Byzantine imperial place of Istanbul with water, the Ottomans never used the cistern, and it was not until many years later the cistern was rediscovered. 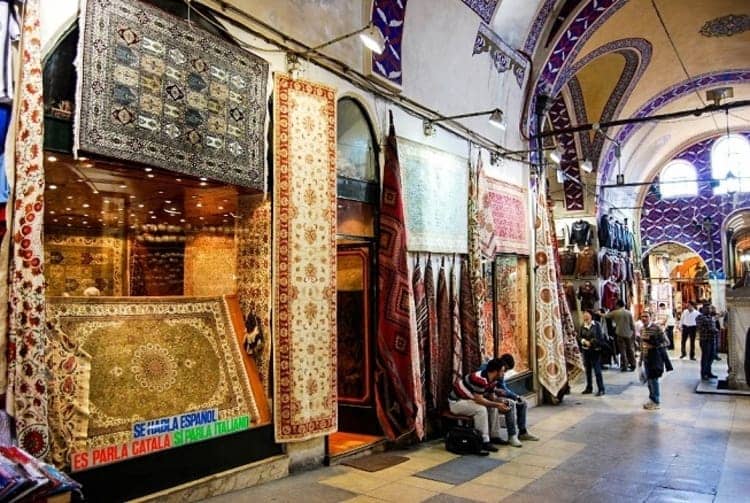 5: The Large Grand Bazaar of Istanbul

Sitting 15-to-20-minute walk away, the Grand Bazaar is both a touristic attraction and a common shopping place for residents of Istanbul. Originally built during the 15th century, for over 500 years, the bazaar has attracted people from all around the world. In history, global traders descended on the bazaar in the hope of trade, but today, thousands of Istanbul holidaymakers enter through its doors every day. As an ideal place to buy souvenirs in Istanbul, also look carefully to admire the ancient Ottoman architecture. Mark Twain, who enjoyed a lengthy stay in Constantinople, famously called the bazaar a monstrous hive of little shops—thousands, I should say—all under one roof. Expect to find everything and anything for sale, although they are grouped, so be prepared for a lengthy stroll around the 3000 plus shops. 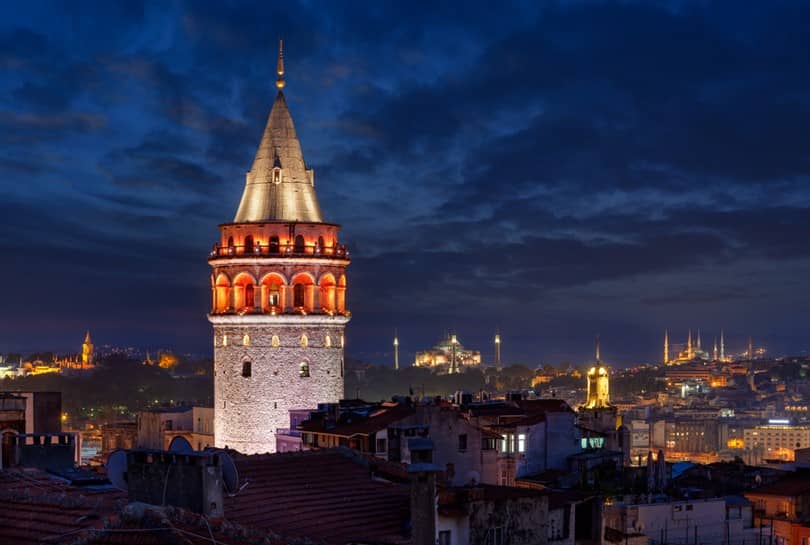 Crossing over the Golden Horn of Istanbul, we reach the old Galata tower, an ideal platform for a marvellous 360-degree view over the Bosphorus and Istanbul city skyline. The Genoese building, which means the tower of Christ in Latin, sits in the Karakoy area, a short distance from Galata bridge. Including nine stories, the tower stands at a staggering seventy metres, but the inside only reaches nine meters. The first tower was built in the 14th century but suffered massive damage during a fire in 1831. Restoration work took place, and in 1960 Istanbul tourism officials replaced wooden interior features with concrete and opened the tower to the public. Visit during the day and get the lift to the top floor, or buy a ticket to their Turkish night shows, although the view won't be as good at night. 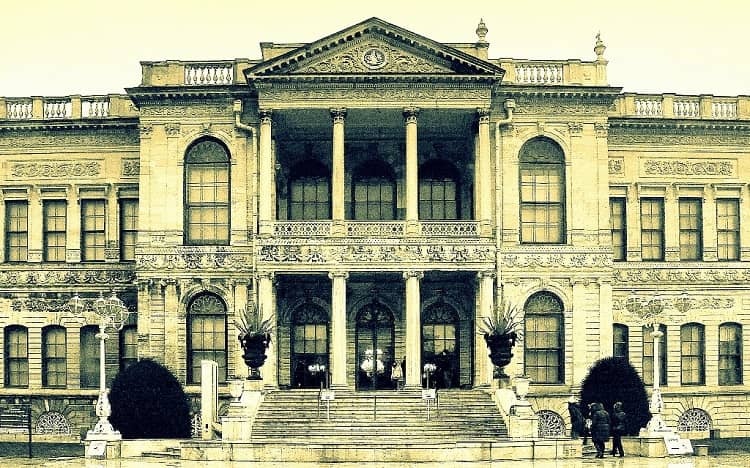 Dolmabahce Palace on the Bosphorus European side of Istanbul gives an insight into the Ottoman sultans last days and how they spent their money. The interior is the most luxurious Istanbul palace dating from the Ottoman empire. Constructed to match and even outrank royal residences in western worlds, Dolmabahce features 6 Turkish baths, 285 rooms, 68 toilets and 44 halls. In addition, 14 tons of gold were used in decorating the ceilings and walls, while pure crystals line staircases. Additionally, in a matter of only perfectionism will do, 131 handmade silk carpets sit alongside the old bearskin rug famously given by Russia's Grand Tzar. Queen Victoria also gifted the giant chandelier, one of the world's most enormous. Like the Topkapi Palace, Dolmabahce separates into the Selanik section, with the harem in another building. Visitors are not allowed to stroll around independently but instead must sign up for a timed guided history tour. 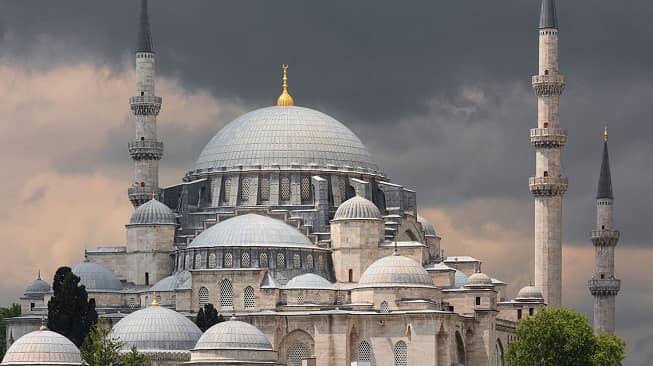 Sitting on what is known as the third hill of Istanbul, the Suleymaniye mosque was constructed in 1550 for the Ottoman sultans by Suleiman the Magnificent. Once again, the mosque is another iconic building by Mimar Sinan, the Ottoman's most celebrated architect. Although the architecture is a stunning sight to see, the most crucial aspect of Suleymaniye mosque is that it holds the mausoleums of Suleiman the Magnificent and his wife, Roxelana. Their love story is notorious because Roxelana originally entered Topkapi Palace as a slave girl but became the most prominent woman in Ottoman history. For nearly 500 years, it was Istanbul's largest mosque, and its hilltop location gives off stunning Golden horn area views.

Places of the Bosphorus in Istanbul

The top eight are the most well-known historical places in Istanbul yet touring the Bosphorus shores throws up more iconic places worth getting to know. From the small fishing villages to old churches, mosques, and Ottoman mansions, we talk about them in our article about fun things to do on the Bosphorus in Istanbul.