Istanbul's grand and beautiful Ottoman palaces are an excellent place to learn all about Turkey's colourful historical timeline. Visiting these beautiful, grand residences highlights how this royal dynasty, which once ruled nearly half the world, lived and operated.

The Ottomans first invaded Istanbul, then named Constantinople in 1453, and from this sprawling city, commanded respect and admiration. Nearly 500 years later, the Ottoman Empire crumbled, but the sultans built many iconic Ottoman palaces that still stand today. Some are open for public touring, and they should be on your bucket list when visiting Istanbul, so let us look at where to start. 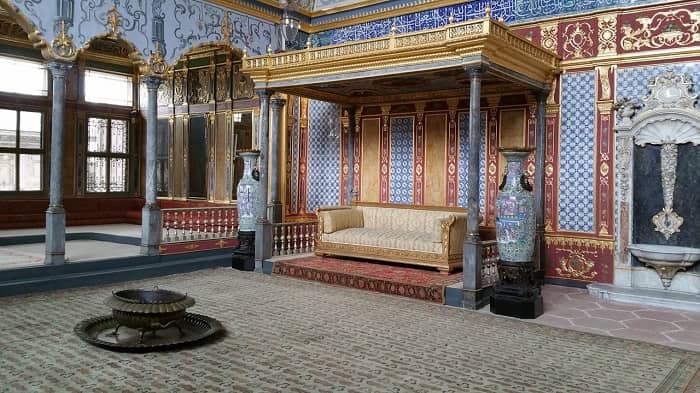 Of course, Topkapi Palace should be your first visit. Standing in the Sultanahmet area, near other iconic landmarks like Hagia Sophia and Blue Mosque, Topkapi was the Ottoman's first ruling centre. To call this building a palace is an understatement. Thousands of people lived within the palace walls, making Topkapi more of a mini-city. As well as being home to the Ottoman sultans, Topkapi Palace was their administrative headquarters for 400 years.

One can only wonder at the hidden stories of ruthless sultans, beautiful concubines, scheming advisors and eunuchs in charge of the harem section. A tour starts at the first court, which includes the Hagia Eirene Byzantine church. The second courtyard was the business centre, with the kitchens, imperial council chamber, treasury, sleeping quarters, and pavilions. From here, visitors also get access to the harem, which is an extra ticket administration fee, but worth paying.

Next is the third courtyard that was the sultan’s private area, and these days, one room holds sacred relics of the prophet Muhammad. The privy chamber dormitory contains all the sultans' portraits, while the treasury section features jewellery and the famous Topkapi Dagger and spoon maker's diamond. Lastly, the fourth court houses beautiful pavilions, marble terraces, and a circumcision room. 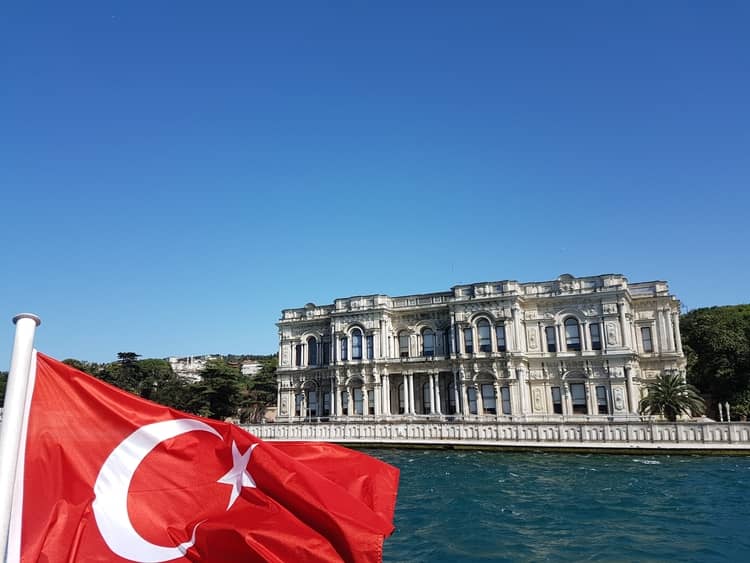 2: Dolmabahce Palace and The Ottoman Demise

The Dolmabahce palace took 13 years to construct and became the Ottoman's dynasty second home in 1856 because Topkapi was outdated. Despite being nicked named the poor man of Europe, the Ottoman dynasty desperately wanted to match the western palaces of France and England in terms of stylish architecture, décor, and design. Sitting in the Besiktas district, Dolmabahce Palace is also most famously known where Mustafa Kemal Ataturk, founder of the modern Turkish republic, passed away.

Visitors can see the room where he passed, and the clock is set to that exact time. Covering 100 thousand square meters, this is another palace where visitors wow at the lavish décor and design. Dolmabahce palace features 6 Turkish baths, 44 halls, 68 toilets and a staggering 285 rooms. Elaborate décor features 14 tons of gold on the ceilings, pure crystals lining staircases, and 131 silk carpets from Hereke, an area in Turkey known for luxury carpet designs.

A chandelier, a present from Queen Victoria of England, weighs a staggering 4 tons and takes 750 lightbulbs, and the Tsar of Russia also presented bearskin carpets. The Dolmabahce Palace separates into the Selanik section, which was the sultans' quarters and administration centre, and the harem. There is a separate entrance fee for both, and visitors must sign up for guided tours. Ticket costs are worth paying, and you won't be disappointed. 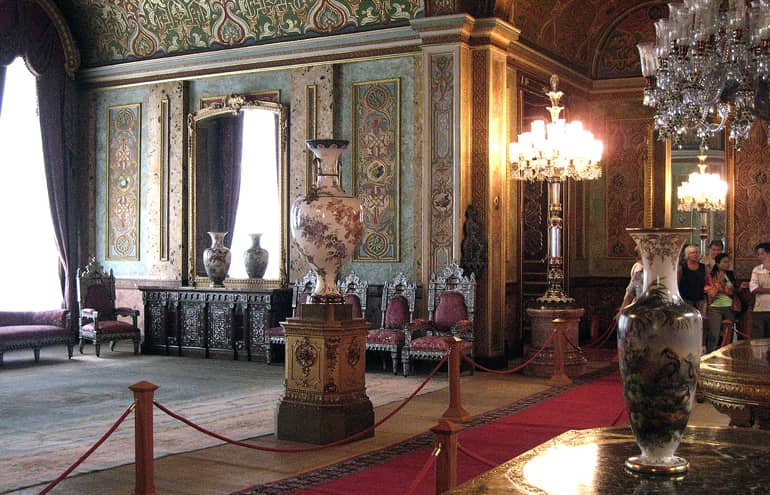 Beylerbeyi Palace was the Ottoman sultans' summer residence and also where they hosted visiting foreign dignitaries. A famous tale is the Empress Eugenie of France, the wife of Napoleon the third, entered the palace on the arms of Abdul-Aziz sultan, hence enraging the Sultan's mother Pertevniyal who slapped her across the face. Other royal international figures who spent time in Beylerbeyi Palace included Austrian Emperor Franz Joseph, German Emperor Wilhelm the 2nd, Prince Nikola of Montenegro and the Duke and Duchess of Windsor.

Covering 300 square meters, visitors tour the harem, barn stables and garden pavilions. The outside exterior displays western architecture, but the interior décor was traditionally Ottoman. Compared to Dolmabahce Palace's extravagance, Beylerbeyi pales in comparison yet still offers eye-catching touches, including the reception hall with pool and fountain. This feature was often used in the grand Ottoman residences at this time of construction because of soothing sounds and imitating relief from the summer heat. Once again, for carpets, Ottoman royalty wanted only the best luxury, Hereke rugs. 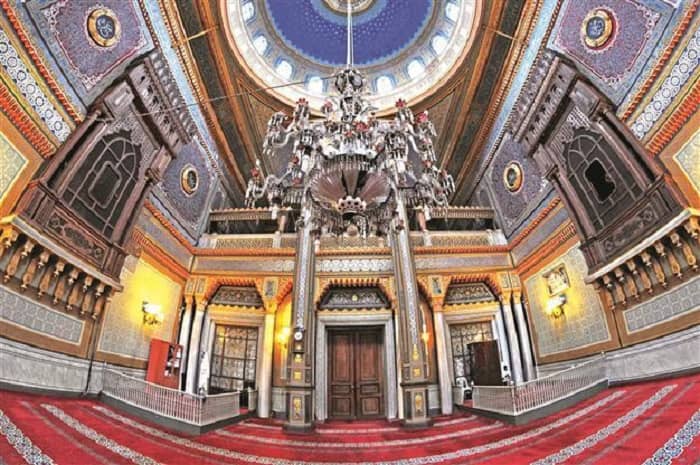 Ottoman Sultan Abdul-Hamid the 2nd briefly used Yildiz palace as an administrative centre. He preferred Yildiz Palace to Dolmabahce, which was prone to sieges from the sea because of the prominent Bosphorus location. Abdul-Hamid continued to make expansions and renovations, eventually expanding the palace to cover 500,000 square meters. Despite this, the impressive architectural style is not as grand or dramatic as the Dolmabahce Palace. Instead, the separate locations of buildings would hark back to the same manner as used in Topkapi.

Abdul-Hamid was passionate about art and culture, and he also added a photography workshop, theatre, painting gallery, printing press, an observatory and a music studio. In another section, workers produced tiles and porcelain products, which the Sultan sent to dignitaries and foreign officials to prove the excellence of Ottoman porcelain production. Another section was dedicated to wood crafting. Yildiz Palace was famously the Ottoman empire's third administrative centre and last since they were disbanded in the years to come. 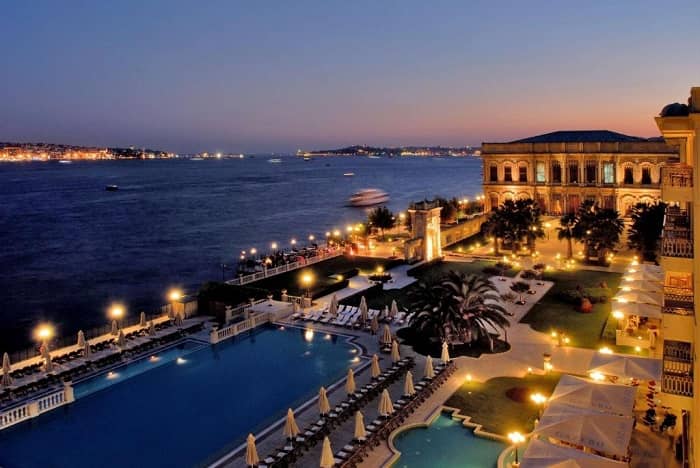 Do you want to stay in an Ottoman palace? If so, book into the former Ciragan Palace that is now a hotel, albeit prices for this five-star establishment are pricey. Sitting on the Bosphorus European shores between Ortakoy and Besiktas, Ciragan is one of the world's 15 most expensive hotels, with suites costing roughly 35,000 USD a night. Built on the orders of Abdul-Aziz sultan in 1876, Ciragan resembled a new trend of sultans building their own houses rather than using those of the previous generation.

The original architectural design featured a wood roof and inner walls, while exterior facades featured marble. Connected to Yildiz Palace via a bridge, Ciragan palace is most famously where Abdul Hamid the 2nd was dethroned and spent his last days. Unfortunately, a fire in 1910 destroyed much of the building, a common occurrence since the Ottomans often used wood to construct houses. After that, Ciragan became a football field until reopening as a high-class hotel in 1987. The Kempinski chain is now the official owner, and during renovations, they replicated much of the original Baroque architecture.

Also known as the Kucuksu pavilion, this royal establishment famously sits on the Asian side of Istanbul, whereas others were mainly on the European side. Regarding size, Kucuksu pales compared to others like Topkapi or Dolmabahce but was never a place of residence, and Ottoman sultans traditionally used the palace for hunting expeditions. Commissioned by Sultan Abdul-Mejid the first, in a neo-baroque style, Kucuksu was initially a two-storey wood structure. The unique aspect is that corner rooms surrounding a central hall reflected more of a Turkish house style than a palace for Ottoman sultans.

They commissioned the same stage designer of the Vienna state opera to decorate the interior. Like other Ottoman palaces, original Hereke carpets were used, along with Bohemia chandeliers and Italian marble. Sultan Abdulaziz added more elaborate architectural features during his reign. After the disbandment of the Ottoman empire, the Turkish government used Kucuksu as a guesthouse, until 1944 when the palace opened as a museum. Another prominent moment of fame happened when the palace appeared as a setting in the James Bond film; The World is Not Enough.

Ottoman Homes in Istanbul: From the grand and majestic Ottoman palaces of Istanbul to the humble homes, this article talks about priceless structures that Istanbul locals strive to preserve. Reflecting on Istanbul's cultural heritage, walking tours to spot old Ottoman homes are popular these days. In this article, we talk about where to find other Ottoman architecture in Istanbul.