The regeneration of Istiklal Street and Taksim Square

The New York Times called Istiklal Avenue, “Istanbul’s Times Square” and they weren’t wrong. As the hub of new Istanbul, and the face of tourism and shopping, it is the most famous and busiest street in Turkey, often recognised by the traditional red tram slowly making its way down the middle.

Anyone with nostalgic yearnings would do well to learn about its Ottoman days when wealthy and influential dignitaries often networked in the cafes and foreign consulates lining both sides of the 1.4-kilometre street.

These days, it attracts the average person on the street from all levels of society including shoppers, buskers, and business executives. While party and music fans fill the streets at night, during the day, every type of cheap and luxury, shop, art gallery, restaurant and bar wants your custom.

Estimates say an average of 3 million people pass through the street every day, hence in December 2016, renovations started on Istiklal Avenue to upgrade its appearance and improve the current infrastructure. 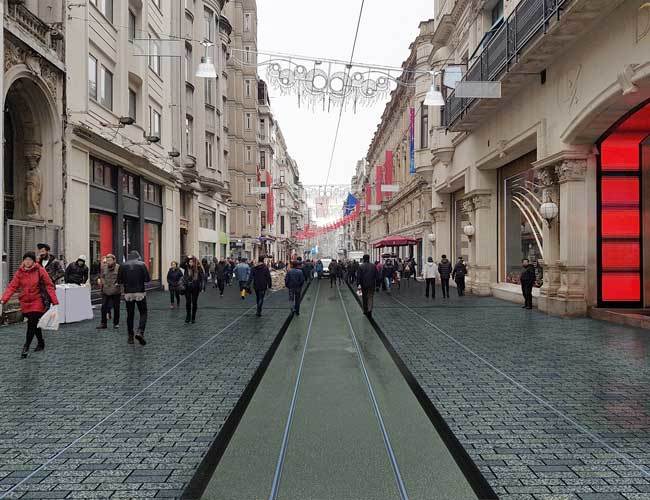 The current work also accounted for future problems and workers will no longer need to disrupt shoppers because electricity, telephone, internet, gas and water workers will have access to quarters underground.

Just in time for the new year of 2018, the red tram carrying an average of 6000 people a day and running from the Taksim End of Istiklal Avenue to the Tunel square district also resumed operations.

For many, it was a welcome relief provoking familiarity of the old Istiklal Avenue. Costing 2 lira and 60 kurus for a ride, it rambles down the long 1.64-kilometre track, taking passengers past some of Istanbul’s most renowned buildings such as the Saint Anthony church and Flower Passage.

Local officials say the extensive cost and workmanship should ensure Istiklal avenue keeps its pristine appearance for at least 30 years, but the refit has not been without criticism.

Many shopkeepers with high rental prices complained of disrupted trade and eventually pulled down the shutters to move elsewhere. However, other parties are keen to say the renovation work was not the only cause of reduced foot traffic. A series of attacks, as well as a failed coup, rocked the tourism industry of not only Istanbul but the whole of Turkey.

With increased safety procedures eventually drawing the tourists back to Turkey as well as the fresh look for Istiklal avenue, many are hoping the street will return to its former, bustling self, but there is more to come.

A New Look for The Ataturk Cultural Centre

Looking across the starting point of Istiklal Avenue, the Ataturk Cultural Centre will be getting more than a facelift. The current building that for many years people have called an eyesore of Istanbul will be torn down and replaced with modern architecture designed by the Tabanlioglu Group, whose founder created the original building.

The group’s earlier achievements include many buildings throughout Turkey including the highly famous Istanbul Modern Art Museum and the international terminal of Istanbul Ataturk Airport.

The total area of the new project will cover just over 35 thousand square meters, an increase of 30,000 on its current size. The architects have also incorporated ultramodern glass to help temperature regulation and lighting of the interior spaces.

The project will include rooftop restaurant promising amazing views, cinema, libraries, meeting room, shops, cafes and art galleries. However, it is the expected cultural role it will play that is drawing attention.

The new Ataturk Cultural Centre will be a significant hub of ballet and opera focusing on backstage areas, dressing rooms, and the front of house.

Recep Tayyip Erdogan, Turkey’s president who is a major backer of the project said, “we will build a magnificent opera house,” something Istanbul lacks despite its international status as a centre of culture and arts. Performances currently take place in the Kadikoy Opera House on the Asian side that was formally a movie theatre.

Some say when completed, the opera hall of the Ataturk Cultural centre will be the biggest in the Turkey, and that just makes it the ideal partner to go with the new look Istiklal Avenue, the country’s busiest street.

To find out more about what is happening in Istanbul, read our blog section focusing on news, events and things to do in the most prominent city of Turkey.