BLOG Turkish Coffee and its Cultural Importance for Friendships

Did you know that in 2013, UNESCO added Turkish coffee to their intangible heritage list? Yes, such is the humble beverage’s importance to Turkey's cultural identity, the practise of making the drink and social etiquette for drinking heightened it to super promotion levels.

UNESCO stands for the United Nations Educational, Scientific and Cultural organisation, and for them, to deem the drink as part of cultural heritage reflects just how much of a significant role it plays in the lives of Turks despite being lesser drank than the humble cup of tea.

An old Turkish proverb portrays its role in society. It says, “A cup of coffee will be remembered for 40 years.” The symbolic meaning is that when two people drink together, the moment will be etched in their mind for 40 years.

Part of the reason for its inclusion is that it isn't a case of adding milk, water, and sugar. The own unique brewing and preparation techniques make it stand out from your average Nescafe or Starbucks. It all starts with the roasted beans ground down into fine granules. They are added along with water and sugar to a unique pot called a Cezve. On a lighted stove, the mixture comes together forming a foam as it heats.

"Coffee should be black as hell, strong as death, and as sweet as love." 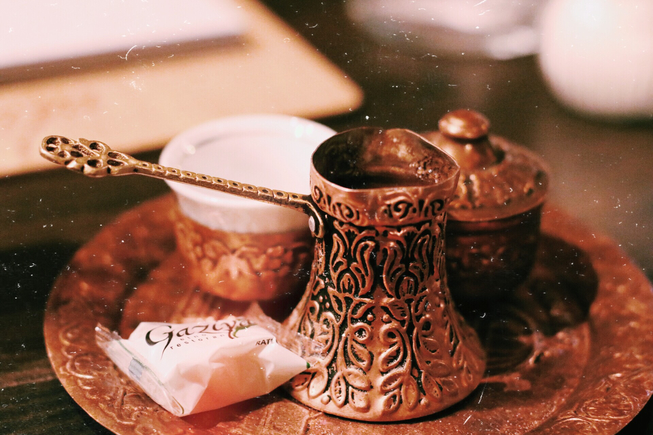 Once ready, pour it into small cups and sip it slowly, with a glass of water. Specialised coffee houses sometimes serve Turkish delight as a palette cleanser to the robust and earthy taste. Some people also say this is a test. If the drinker eats the Turkish delight, he was pleased, whereas unsatisfied customers will leave it. While ordering, state your sugar preference because they add it during brewing. Az sekerli means just a little sugar, Orta is medium, while sekerli means lots.

One strong theme running through the coffee scene is that Turks drink it after a meal, which in Turkish culture is also a treasured moment shared with friends and family. It is all about hospitality, and a chance to catch up on each other's news or build strong friendships. The cultural and friendship aspects aren't the only reason to drink Turkish coffee either. Scientists say, it lowers cholesterol, prevents heart disease, aids the digestive system and is an excellent antioxidant. 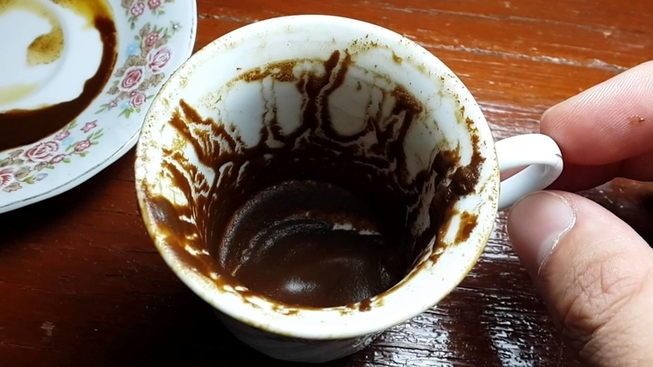 Have Your Fortune Read!

When finished, sediment is left on the bottom of the cup, and certain people read fortunes from it. They turn the cup upside down for the residue to flow into the saucer.  In most cases, generations pass on the skills to understand the signs, known as tasseography.

Before you start your reading, if the cup sticks to the saucer, it is time to celebrate because this means, luck is on your side. Turning the cup upside down would break it. Examples of symbols that readers are looking for include… 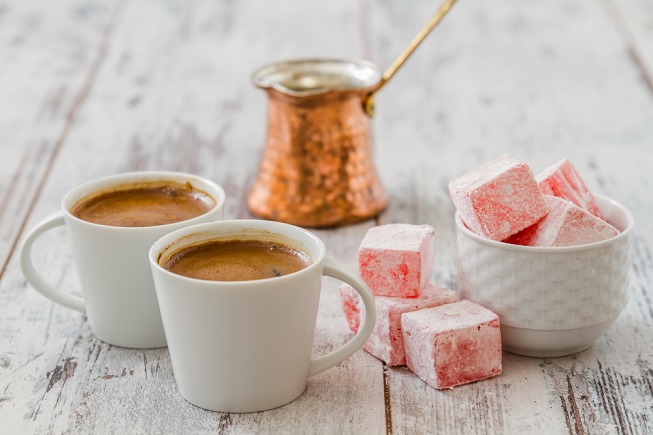 Testing the Hand of Marriage

An age-old tradition says a potential suitor can be tested to see if he is deemed marriage material. A Turkish girl would serve coffee but with salt included instead of sugar. If the man complains, it shows the marriage would not be an easy one, but if he says nothing, he would make an excellent husband.

Even though one type is drunk, there are many varieties. Heading to Turkey's south-eastern part reveals this, more so than in the Aegean and Mediterranean. They make Menengic from the beans of a pistacia terebinthus tree, and despite belonging to the coffee family has no caffeine.

Although it is the same consistency and made the same way, there isn't a robust earthy flavour associated with it. Dibek is made from the same bean but because a mortar and pestle are used to grind it, the taste changes. Meanwhile twice roasted Mirra beans are not as ground down as the original version.

To know more, a book called “Turkish Coffee” by M. Sabri Kuzucu explores its history going back 500 years, whereas another one called told “In The Coffee House” by  Cyrus Adler and Allan Ramsay recounts Turkish tales from coffee houses of Constantinople in the 1800s. Also on December the 5th every year, take some time out to enjoy World Turkish Coffee Day, which celebrates the humble but delicious drink.

"The heart wants neither coffee nor coffeehouse; it wants friendship; coffee is an excuse."

Cafe Culture of Istanbul: Whether it is high street brands or the traditional version, cafes in Istanbul make a roaring trade with visitors seeking that perfect caffeine fix. In this article, we look at the best neighbourhood cafes, chains and lingo you need to know.

Beverages of Turkey: If caffeine isn't your favoured taste on your palette, this article suggests other well-known Turkish drinks to consume in both summer and winter. From the well-known Turkish tea to the thirst quenching Ayran, we are sure you will enjoy them.