BLOG Where is the Most Visited Place in Turkey?

Where is the Most Visited Place in Turkey?

It should come as no surprise that the most visited place in Turkey is Istanbul. This massive city commands respect, fame, and admiration from around the world and in Turkey, not only for tourism, but business, education, and finance. Every year, roughly 5 million tourists descend on the city to explore the historical attractions and indulge in shopping and nightlife scenes.

But, despite Istanbul's popularity, please don't think this is all there is to Turkey. While Istanbul delights everyone, visit other well-known places to gain great insight into Turkey's diversity. No one can stereotype the country since all four corners portray different cultures, landscapes, weather climates and traditions. So, we listed the top five places you should see on a visit to Turkey.

Most Visited Places in Turkey

Istanbul is Turkey's most significant destination, but the best place to visit within it will depend on your travel preferences. Combining the old area featuring landmarks from the Byzantine and Ottoman empires with new districts and shopping and nightlife hubs, vibrant Istanbul offers hidden surprises on every corner. Operating for tourism, there is much to see and do all year round, like the old Sultanahmet district, where most tourists head. Stunning landmark buildings with marvellous architecture include the Hagia Sophia, Blue Mosque, and Topkapi Palace, from where the Ottomans ruled their lands.

Don't underestimate this city of Turkey, however. Altogether 39 districts across the European and Asian continents break down into 900 neighbourhoods and millions of residents. Moreover, Istanbul has two airports to get there. The new airport replaced European Ataturk Airport.Meanwhile Sabiha Gokcen airport services the Asian side. Must visit markets include the Spice Bazaar, where vendors sell dried fruits, nuts, spices, and Turkish delight. With over 3,000 shops, the Grand Bazaar is Turkey's largest covered market and is ideal for souvenir shopping. But if modern shopping malls are what you desire while in Turkey, head to the Mall of Istanbul, Forum, and Istinye Shopping Park Centre.

Yildiz Park, Gulhane Park, and Demokrasi park are three popular choices for relaxing in parks. Explore the Princes Islands for Ottoman nostalgia, or head to charming Bosphorus villages like Arnavutkoy, Bebek, Kilyos, and Cengelkoy. The best theme parks for the kids are Miniaturk and Istanbul Aquarium. Read about historical attractions in Istanbul - Turkey.

On your visit in Turkey, the Cappadocia region couldn't be more different than Istanbul. Prepare for travel experiences unlike anywhere else. Lunar-like rocks landscapes are unique and mesmerising and make for original holiday photos of your time in Turkey. 2.5 million tourists visit Cappadocia every year, proving it is one of Turkey's most visited places. Rustic cave hotels, the most beautiful valleys, ancient cave churches, and hot-air balloon rides are highly rated attractions and things to do. Be aware if visiting in winter because snow often falls. Yes, the Cappadocia region does get snowfall which surprises many on a visit to Turkey.

Many people stay in Goreme, the great heart of Cappadocia, while coach tour groups often prefer Urgup. Uchisar and its castle promote five-star luxury plus hotels, or Ortahisar features a small, village-like ambience. Three nights is ample time to visit all the main attractions like historical underground cities, of which there are hundreds in Cappadocia. The best and most extensive location is Derinkuyu. Lastly, visit Goreme Open-Air Museum, a UNESCO site featuring ancient cave churches and monasteries. Avanos town is also famous for pottery; otherwise, explore beautiful landscapes and valleys by trekking, quad biking, or horse riding.

3: Summer in the Mediterranean Antalya Region

Sitting over on Turkey's eastern Mediterranean coast and backed by the Taurus Mountain range, the Antalya region and city is an all-rounder, accommodating both rich and budget travellers on a visit in Turkey with various activities, beaches, hotels, and restaurants. Antalya is Turkey's third most popular tourist destination, but if you single out places for beaches, then Mediterranean Antalya is first. No other place in the country of Turkey like Istanbul or Cappadocia can match the beautiful and best beaches and sea, including Cleopatra, Konyaalti, Lara and Kapatus.

Antalya city is the start of the famous Lycian way of Turkey, stretching to the Fethiye region and including many ancient Lycian empire cities. Otherwise, expect beautiful scenery, an excellent weather climate, modern living, and traditional Turkish vibes from Antalya. Frequent tourist flights operate all year round to the Antalya region of Turkey with an airport of the same name that services all coastal resorts, including Alanya, Side, Kemer, Belek, and the large city centre. Antalya also sits on the main D400 highway from east to west of Turkey, so car drivers get here in no time.

As well as being Turkey's citrus capital, Antalya sits on the famous Turkish Riviera, and the Belek region is Turkey's golfing capital, so as you can see, there are many tourist reasons for the millions of visitors every year. Other popular attractions and trips include amusement parks, jeep safaris, boat cruises, village tours, and hiring a car to explore and travel at your own pace. Additionally, adrenaline junkies from around Turkey and the world flock thanks to many extreme sports on offer, including paragliding, white water rafting, and canyoning.

Also visit Alanya Castle, Side Ruins, Kaleici old Ottoman town centre, Mount Tahtali, Duden and Manavgat Waterfalls, Aspendos and Perge ancient ruins, Antalya Aquarium and Antalya Museum. Being a seaside destination in Turkey, many like Antalya's Mediterranean dining scene, of seafood and fish restaurants along the coastline, or alfresco style dining on rooftops. For hotels, choose from the holiday seaside resorts of Alanya, the town centre, Side, Kemer, and Belek. Alternatively, rustic Kas and upmarket Kalkan provide two more choices on the region's outskirts. Read more about the Antalya region of Turkey.

Sitting one hour's drive from Izmir, Ephesus's ancient city hosts millions of people during a visit in Turkey. The Roman historical timeline and well-preserved buildings show insight into a city and destination that nearly rivalled Rome in commercial importance and wealth. Ephesus was built in the 10th Century BC and included the Artemis Temple, one of the Seven Wonders of the Ancient World. More importantly, Ephesus was a revelation church and featured highly in the Bible since Saint John lived here and Saint Peter and the Virgin Mary spent time here. 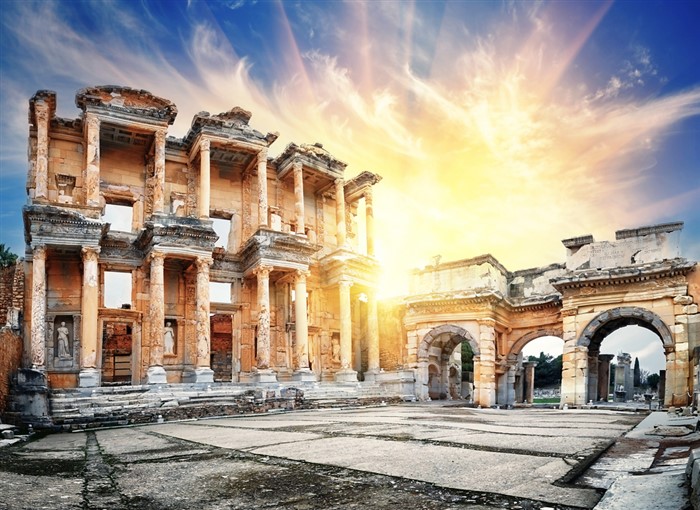 Notable points in history included joining the famed Ionian league. Unfortunately, the edging away of the Aegean Sea diminished sea trade and its Roman port status. These days, historians carefully reconstructed the city and landmark buildings, including the Celsius Library dating from 125AD, the Hellenistic Grand Theatre, the Temple of Hadrian, the Roman Terrace houses, Marble Road, public latrines, bath complexes and the Odeon arena. While visiting Ephesus, another place to visit is the Virgin Mary's house, high in the Selcuk hills, where the Catholic church believes she ascended.

In Turkey's Denizli region, about three-hour drive from Izmir, the hillside Pamukkale is aptly named because of the white cotton castle appearance. In 2014, the pools and nearby ruins of Hierapolis city were Turkey's most visited attractions, although these days, Pamukkale often competes with Ephesus for the number one spot in Turkey. Both are Turkish UNESCO World Heritage sites, and science explains that the solidified white pools start from natural spring water with high amounts of calcium. During the Roman era, wounded soldiers used to come here for healing. But Pamukkale remained off the mainstream tourism grid until 1970 when package tours came to Turkey.

Naturally, masses of tourists often disrupt places of natural beauty, and in Pamukkale, waste filled the pools that were already suffering because of extra foot traffic. Finally, Turkey's government intervened to save Pamukkale, and these days, visitors can enjoy the natural landmark without ruining it. Nearby, Cleopatra's pool asks visitors to pay an extra fee to swim in. The spa water helps skin disorders elevate blood pressure, arthritis, and other neurological disorders. Also, see nearby ancient Hierapolis city, dating from the 2nd century BC. Closely connected with the pagan gods and spring waters of Pamukkale, these days, the best-preserved structure is the large amphitheatre.

We are Turkey Homes, an agent who sells holiday homes and investment real estate in Turkey. Our Turkish teams based in Istanbul, Antalya, Bodrum, and Fethiye have collected their extensive knowledge and experience about Turkey to form articles about the most visited places in Turkey, like Aegean Bodrum, Ankara, the traditions, culture, food, and history and much more. So for your one-stop research and information and more about the best place to visit, our blog about Turkey will satisfy your curiosity.