BLOG Why Is The Tulip The Symbol Of Turkey?

About the Tulip Flower in Turkey

Many first-time visitors are often surprised to learn that the humble but beautiful tulip flower is the symbol of Turkey. Usually associating tulips with Holland, they never realised the flower firmly engrains itself into Turkish history. The answer to why is easy. Tulips originated from the Asian Pamir Mountains, where nomadic Turks took them to Turkey's Anatolian region, and from here, Ottomans started trading them worldwide, including to Holland in the 15th century. Yet, do not underestimate its importance as just a symbol. While Holland used them for landscape gardening, the flowers are a prominent theme in Turkish art, Ottoman empire history, culture, religion, and stories about Turkey.

About the Tulip Flower in Turkey 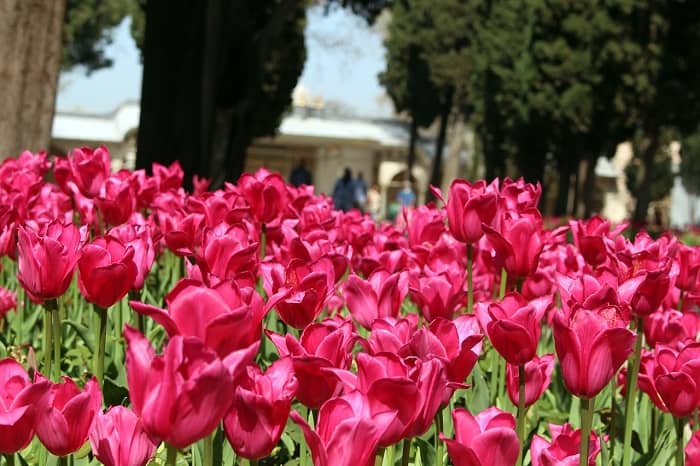 Firstly, in the 15th century, Istanbul's ambassador to the Austro-Hungarian empire sent tulip flower bulbs to Vienna and the Netherlands from Istanbul. Such was the tulip's popularity, they too wanted to trade the bulb around the world and sent them to Canada, and from there, intense admiration vibrated worldwide. This was when the tulip's status started to differ. Previously, only royalty and wealthy members of society could afford the flower.

Any Ottomans, or Dutch people, who could afford tulips, cemented their status as wealthy members of society. Additionally, tulips cost the same price as houses back in those days. Then Sultan Suleyman the Magnificent came to power, and such was his admiration of the flower, he said everyone should see their beauty; hence he flooded markets to bring prices down. Fast forward to this day, and the Netherlands sell billions of tulips every year to put colour into their gardens and landscapes. But in Turkey, the cultural significance is much more important.

Tulips in Ottoman and Turkish Culture

Should you spend a day sightseeing in Istanbul or any other prominent destination featuring Turkish culture, this activity is fun. Look out for tulip symbols where ever you go. Sometimes if people are not paying attention to detail, they miss designs, but they are everywhere. Old and new mosques feature tulips on interior tiles, and traditional Turkish carpets often have tulips as motifs.

The Ministry of Culture and Tourism call centre features the flower as its logo. You might also see it on old Ottoman fountains, washing taps, and tombstones. Many years of the 17th century fall under the category of tulip mania because people went crazy over them. But in the 18th century, such was the status of tulips in art, poems, songs, and culture; historians labelled it the tulip era. 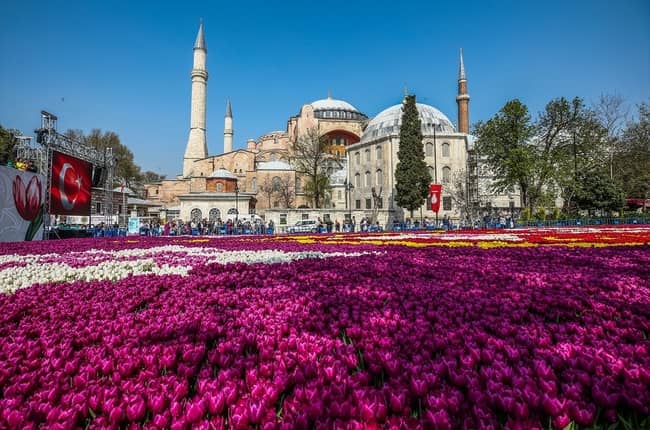 The Istanbul Tulip Festival takes place during April every year in various locations around the city. Artists use flower designs in exhibition displays. While parks and gardens of Istanbul fill with displays, tulips adorn roadsides and window boxes. One striking display is the carpet of tulips in the Sultanahmet district of Istanbul, although the rainbow displays in Gulhane and Emirgan are also spectacular. In Istanbul during April, the Tulip Festival is hard to miss because the city explodes with a vast array of multi-coloured flowers.

About Spring in Turkey: As well as knowing all about the tulip in Turkey, it is worth exploring the country in Spring. Our team loves Springtime. Everyone looks forward to summer when temperatures reach their peaks. While we like summer, something about Spring lures us to fully enjoy the three months. As cold weather subsides and sunshine emerges, Spring sees Turkish cities, villages and towns come alive. So, we put together our reasons to visit Turkey during Spring, what to expect and where to go.

Ottoman Palaces in Istanbul: Alongside beautiful tulips, the Ottoman legacy includes much more, including stunning architecture throughout Turkey. Istanbul's grand palaces are one place to see their excellence in building landmarks structures. Visiting these beautiful, elegant residences highlights how this royal dynasty, which once ruled nearly half the world, lived, and operated. Ottoman sultans built many iconic palaces. Some open for public touring, and should be on your bucket list when visiting Istanbul. While there, keep an eye out for iconic tulip designs of Turkey