It may surprise anybody not familiar with the country to learn eating fish in Turkey is an essential part of its culture. While its stereotyped international reputation revolves around the humble kebab, the cuisine goes much deeper.

Fish and seafood feature in many recipes and the fishmonger is a respected trade. Just as much as the local farmers' market features in every social calendar, daily fish markets are an integral part of the community, even in inland places away from the coastline. This is not a newfound trend because the tradition stems back centuries.

To understand just how much Turks love their fish, knowing a little geography helps. The Aegean, Mediterranean, Marmara and Black seas surround Turkey. We are talking about 8000 kilometres of coastline, which make it one of the world’s most famous beach holiday destinations but delivers a unique form of cuisine.

The immense variety of fish is because of unique fishing habits for each sea. These days, eating fish is about choice, but for many centuries, it was a valuable nutrition source straight from the sea to table.

An essential month for anyone in the fishing trade is September, the beginning of the season when trawlers look forward to bumper catches, because fish migrate from the Black sea to warmer waters. This lasts until April, after which they breed and fish farms like trout kick into action. So, to indulge in seafood cuisine while in Turkey, which dishes do we recommend?

Vira Bismillah – Raising the anchor in the name of God – Popular saying in the Turkish fishing trade. 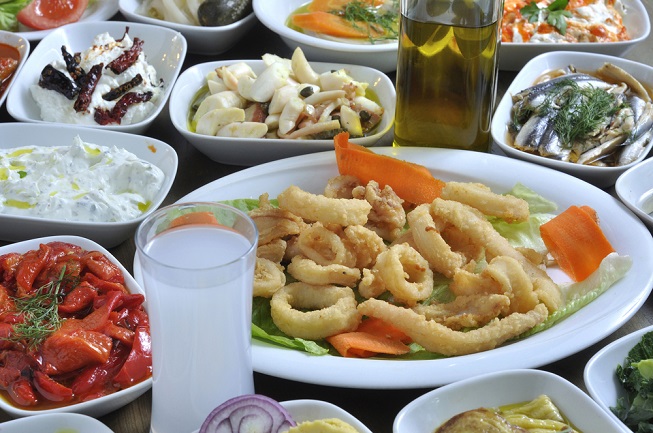 Such is the variety of fish species and seafood dishes; breaking them down into categories helps to understand the eating culture. The first is a selection of mezes, otherwise known as appetisers. Mezes are a big thing in Turkey, when dining out with friends. Restaurants sometimes display them in fridges, or the waiter brings a menu to the table. A wide selection sits in the middle for everyone to nibble on before the main meal. Most mezes dishes feature seafood.

1: Crispy Calamari: By far, the most popular seafood meze during summer is crispy calamari which must be fresh. Woe betides, any restaurant passing off frozen calamari as fresh because most Turks spot the difference, because of a drop in quality and chewiness. However, a restaurant’s reputation also stems around the batter coating. Crispy and tasty often wins its rave reviews. Wedges of lemon and tartar sauce accompany this simple but delicious dish.

2: Octopus Salad: Called Ahtapot Salatasi in Turkish, this dish is a must-try. The mixture of an octopus with sliced peppers, olives, onions, and dill covered with a lemon and olive oil dressing teams well with sliced bread and can be hearty. Expect to see a few tentacles in there, because Turks make use of the whole octopus because of its limited supply. They place it in the freezer for a few days before cleaning it, to tenderize the flesh, and anglers, when they catch an octopus, beat it against rocks or a hard surface because this relaxes the muscles.

3: Garlic Shrimp in Butter / Chilli: As another must-try dish, this is one of our favourites. Simple but delicious. Shrimp, served in an earthenware dish, is covered in butter with generous slices of garlic. An alternative is to add or substitute the garlic for small chilli flakes, known as pul biber. With medium heat and just the right amount, they add an extra kick to the dish. A bonus is a slice of toast, to mop up the remaining butter sauce. Another option for the main dish is to upgrade to king prawns, albeit it is pricy. 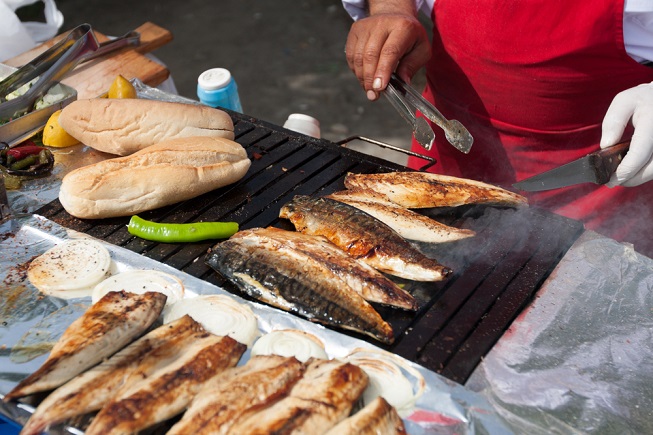 When serving fish as a main dish in Turkey, Turks like simplicity and a Mediterranean style. Keeping the focus on the fish, they serve it with a side salad or roka, and sometimes chips or potatoes. When ordering fish in a restaurant, expect to see it delivered to your table with head and tail still intact. If the thought turns your stomach, any good waiter who knows his trade will top, tail, and debone it. Tradition says, the drink to accompany any fish dish should be the national alcoholic drink of raki, because the aniseed flavour compliments it.

Along the Aegean, and Mediterranean Sea, popular types of fish include seabass (Levrek) and seabream (Chupra). Heading to the Bosphorus strait, Istanbul locals love bluefish. Regardless of what you choose, seek the specialised fish restaurants which serve nothing else. Taking their trade seriously, fish is fresh and trained chefs can steam, boil or grill to perfection. Grilling, a favoured method of cooking, preserves the juices and tender meat. For your first choice, we recommend Hamsi. This countrywide dish is a firm favourite and engrained in Turkey’s cuisine forever. 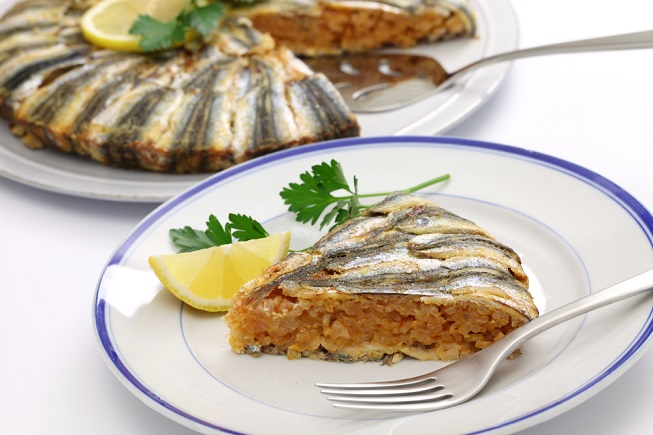 Hamsi: Turkey’s most popular fish dish is anchovies. Turks will flour and season it before deep-frying or grilling it to perfection. It is cheap, filling, and when combined with salad and chips, provides a hearty meal. In the Black Sea region, mainly the northeast, the humble anchovy has earned a king like status. They swim, and breed on this stretch of coastline hence are in abundance, and locals still cook age-old recipes to make use of their abundance. Expect to find them in rice, bread, and even cakes!

We love eating street food in Turkey because it is cheap and ideal in a hurry. Don’t think street food vendors compromise on taste either. If you find yourself in any coastal destination but especially Istanbul, try the local balik ekmek. This is grilled fish combined with onions, tomatoes, and lettuce on two slabs of bread. In Istanbul, the must-go-to spot is Galata’s floating fish boats. While there, keep an eye out for the local anglers lining both sides of Galata Bridge. They are just as much of a local legend as the boats. 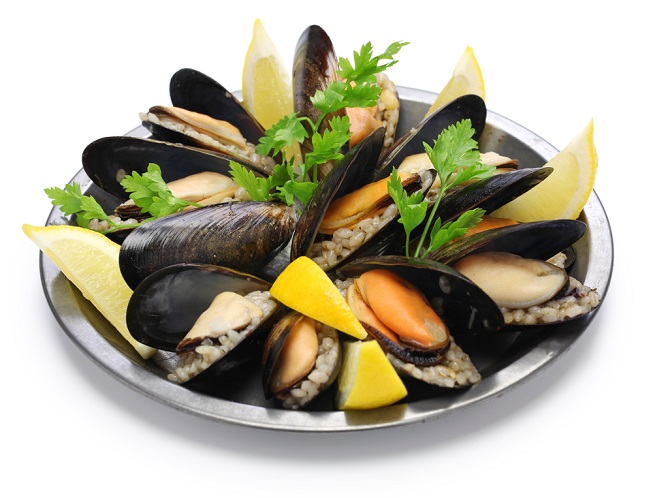 Our favourite street food is Midye, which appears in summer months. Vendors sell mussels filled with frequent rice in their shells, and you just squeeze lemon juice over them and eat. The mussel’s tenderness combined with parsley, dill, cinnamon, black pepper, pine nuts and lemon evoke an addictive taste that keeps you coming back for more. A word of warning though, unrefrigerated rice and seafood is a food poisoning disaster waiting to happen, especially under the summer sun which can reach temperatures of the mid-40s, so only buy from vendors who refrigerate.

Turkish Desserts: Eating fish in Turkey is filling, but if you have room for more culinary delights, Turkish desserts end your meal with a sweet twist. Ranging from time old classics like Dondurma (Turkish ice cream) to Middle-Eastern influences like Kunufe, all of them are a must-try when in Turkey.

Popular Turkish Food Dishes: As mentioned before, Turkey’s cuisine is all-encompassing and features every type of ingredient. If after eating your way through the seafood and fish dishes, you fancy something else, try these time-honoured dishes loved by Turks as part of their culinary heritage.