BLOG Ottoman Landmarks In Turkey That Showcase Their Rise And Fall

The long list of Ottoman landmarks in Turkey is a perfect introduction to an empire that was the most powerful in the world at one stage in history. Ruling for more than 600 years, their empire only crumbled in 1922, after the First World War and the Turkish War of Independence knocked them off their throne. Once a tiny, nomadic Turkic tribe in Anatolia and led by Osman Gazi, this family started their takeover of Turkey in the late 13th century by taking the weakened Byzantine kingdom by force.

Contrary to popular belief, their first ruling capital in Turkey was Bursa city, which they invaded in 1326. However, by 1453, they had their sights set even bigger, and Mehmed, the conqueror invaded Constantinople and renamed the city as the Ottoman empire’s capital ruling city. During their rise and fall as an esteemed fighting force, they built many landmarks and influenced the shape of Turkey through traditional Ottoman architecture. Let us look at where you can visit to gain a greater understanding of the mighty Ottoman empire 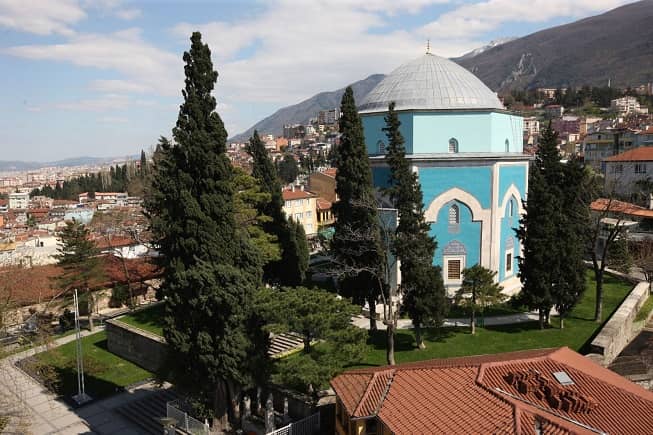 Bursa historical city centre has a lot of Ottoman landmarks, but three stand out because they were either commissioned by Ottoman Sultans or grand viziers. Try to put all the historical buildings on your list because they belong to the UNESCO World Heritage site list, but a good place to start is the green tomb, also known as the mausoleum of Ottoman sultan Mehmed the 1st who was the fifth sultan of the empire. Built by his son, Murad the second, who succeeded him, he commissioned architect Haci Ivaz to build the tomb and mosque nearby. Sitting in the Yesil neighbourhood of Bursa, the mausoleum is higher than surrounding features to emphasise the late sultan’s importance. Taking its nickname from tiles adorning the exterior, a dome tops the hexagonal shaped building.

Sitting in the heart of Bursa city, the Koza Han was a historical caravanserai built by Ottoman Sultan Bayezid. These landmark buildings throughout the Ottoman empire were places where travelling merchants could rest, get food, and have a safe place for their animals away from bandits. Bursa was a significant centre of the silk trade, therefore hosted many travelling salespeople. First opening its door in 1991, architect Andul Ulu Bin Pulad designed the building to impress. Such is its importance; there are still silk shops in the building today. Its impressive appearance is thanks to extensive repairs made in 1630, 1671, and 1784. The Koza Han mosque was also restored in 1946 and 2007 and thrust into the limelight in 2008 when queen Elizabeth the second visited with the president. While there, enjoy refreshments in the courtyard cafes and tea shops.

Sitting in the Safranbolu town of the Karabuk province, this mosque perfectly portraying Ottoman architecture was completed in 1798. The mosque is part of many buildings making up the UNESCO World Heritage site collection. Commissioned by Izzet Mehmet Pasa, an Ottoman grand vizier, during the reign of Selim the third and Abdulhamit the first, the mosque features typical kulliye style architecture that Ottoman landmark buildings are known for. Within the mosque are several shops, a library and two fountains. Many say the design of Izzet Mehmet Pasa mosque is remarkably like the 18th century Nuruosmaniye mosque of Istanbul. 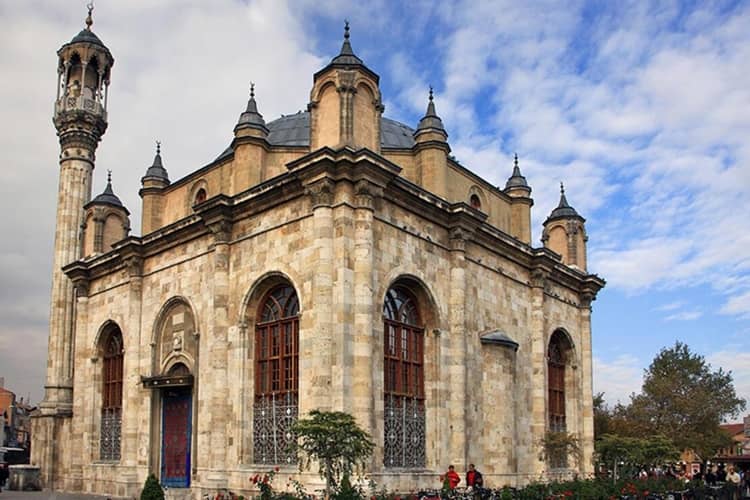 The Aziziye mosque of Konya is not the original. That building commissioned by the son in law of Sultan Ahmet the sixth burnt down in a fire in 1867. Therefore, the mother of Sultan Abdulaziz recommissioned construction in 1874. Mostly known for its mixture of Ottoman and Baroque architecture, the mosque’s many unique features make the landmark building stand out. This includes an elevated main floor and windows wider than doors. Built from cut stone, within the member and mihrab, blue marble can be seen. Another unique feature is that columns support the balcony roof of the minarets.

Also called Tashan, the Rustem Pasha Caravansary sits in the Yatutiye neighbourhood of Eastern Erzurum. Ottoman Grand Vizier Rustem Pasha, who served Sultan Suleman the magnificent, built the Caravansary in 1561 to help travelling tradesmen. They would stop overnight and have a safe resting place for their livestock and trade items. A quirky thing to spot should you visit is the entrance inscription says, this is a border post. It was not until many years later, the authorities added shelters, barns, and shops when the boundaries were expanded. Rustum Pasha Caravansary features typical Ottoman architecture, with a rectangle courtyard surrounded by 32 rooms. These days, head to Rustem Pasha Caravansary to see craftmanship at work by locals who make jewellery from the local Oltu stone. 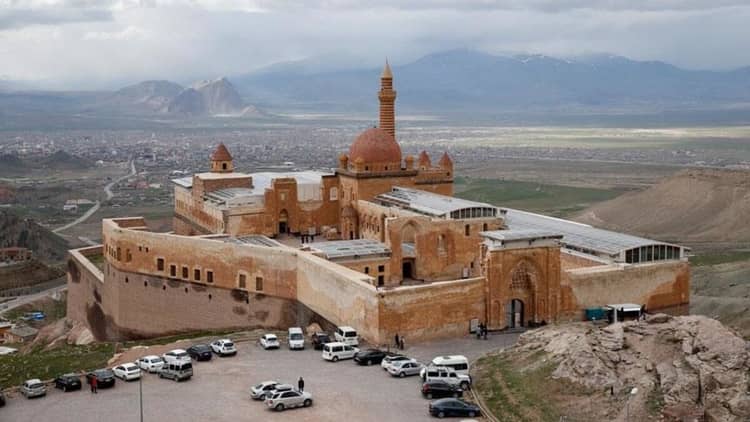 Sitting 7 kilometres southeast of Dogubayazit, the Grand Ishak Pasa palace rarely receives tourists due to its remote location, yet the Ottoman palace is a sight worth making the journey for. Construction started in 1685 and was completed in 1784. Measuring 115 x 50 meters with a terrace, two courtyards and various rooms, the palace covers approximately 7600 square meters. The building displays everything an Ottoman palace should, include a harem, meeting rooms, mosque, kitchens, and a basement covering three floors. Now an official UNESCO World Heritage site, the palace uniquely features Seljuk art in the form of motifs, and ornamentation.

Of course, the best place to go to see Ottoman landmarks in Turkey is Istanbul. From the grand palace and Royal imperial mosques, three famous buildings; the Hagia Sophia, Blue Mosque and Topkapi Palace sit in the Sultanahmet district of Fatih. Suleymaniye mosque is another prized gem that sits on what is known as Istanbul’s third hill. We think a great place to start, though is the famous palaces, the ottomans built for residence and summer homes, and you can read all about them here.

Villages in Turkey: The country features over 30,000 villages, including fishing hubs of the Black Sea, Aegean and Mediterranean to remote Kackar mountain destinations. Since villagers rely a lot on their environment and natural surroundings, life differs from the dry southeast plains to the western sandy beaches. So, what is the best part of visiting these villages? Well, we love old houses, getting to learn about regional cuisine and learning about Turkish culture and traditions. So, we present our favourite places to visit, away from modern urban landscapes.